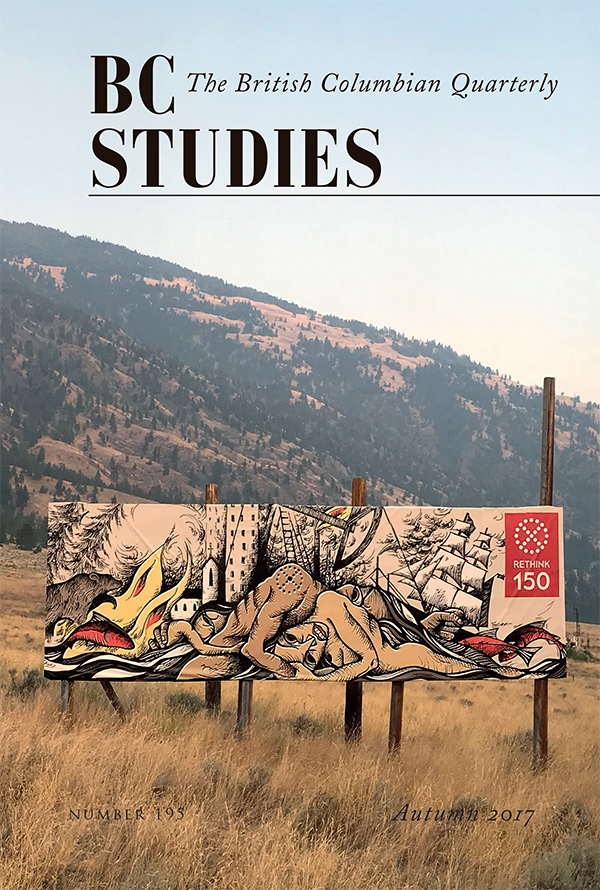 By Crystal Przybille on behalf of the Rethink150 Collective

By Kate Dubensky and Helen Raptis

Memorandum of Misunderstanding? Public Accountability and the University of British Columbia, Okanagan Campus, 2004-17

Survivance, Signs, and Media Art Histories: New Temporalities and Productive Tensions in Dana Claxton’s Made to Be Ready

Is the World Wonderful? On Judy Chartrand’s What a Wonderful World

Judy Chartrand: What a Wonderful World on view at the Bill Reid Gallery of Northwest Coast Art, Vancouver, BC, 19 October 2016 – 26 March 2017. Admittedly, I was confused about where the permanent collection...

A Tradition of Evolution: The Vancouver Indigenous Media Arts Festival

Winner of the Best Canadian Feature at the 2016 Hot Docs Festival, Nettie Wild’s Konelīne: our land beautiful weaves together stories of humanity’s relationships with industry, the wilderness, and nature in Northwestern British Columbia. Telling...

As the language and culture director for the Tahltan Nation and a Tahltan academic, I believe giving voice to our people is crucial. Until recent times, the academy has privileged the voices of settlers and...

Amidst the celebrations for the 150th anniversary of Canada’s confederation this year, scholars and citizens alike are calling for national reflection on what this anniversary is meant to commemorate. To this end, Margery Fee’s Literary...

Neither book under review has an explicit connection with British Columbia. Nonetheless, both deal with subjects of great relevance to the province. In New Treaty New Tradition Jones addresses the complexities of the New Zealand...

I was a third-year undergraduate at UBC in 1990 when Bruce Miller joined the Department of Anthropology and Sociology, launching his second career after having taught high school.  Between 1991 and 1994 I took several...

Little is as intimate and political as the water that flows from city taps. We fill our bodies with it, we wash our babies in it. Many of us depend on the state to provide...

Aqueduct: Colonialism, Resources, and the Histories We Remember

If, as Adele Perry suggests, history is cacophony, then the opening of Winnipeg’s Canadian Museum of Human Rights (CMHR) in September 2014 was bound to be discordant. Camped outside the CMHR, Anishinaabe from Shoal Lake...

The Columbia River Treaty: A Primer

These are two little books about one big river and the agreement that remade it. By any measure, the Columbia River Treaty (CRT) was a transformative moment for the Pacific Northwest. Finalized by Canada and...

This volume assembles the remaining records (with the exception of accounts) produced between 1806 and 1821 at Edmonton House, the Saskatchewan District headquarters of the Hudson’s Bay Company. This period starts with the 1806 Lewis...

A Great Rural Sisterhood: Madge Robertson Watt and the ACWW

In A Great Rural Sisterhood, Linda Ambrose has taken on the challenging task of telling the life story of a woman who left behind no personal diaries or papers and only a fragmented paper trail....

Arthur “Slim” Evans has long been a notable figure in Canadian labour history, most often associated with the famed On-to-Ottawa Trek that he led in 1935 in an effort to improve conditions in the relief...

A Rock Fell on the Moon: Dad and the Great Yukon Silver Ore Heist

On the surface, Alicia Priest’s memoir A Rock Fell on the Moon: Dad and the Great Yukon Silver Ore Heist is a well-researched and well-written account of Gerald H. Priest’s attempt to steal silver ore...

Christy Clark: Behind the Smile

According to Judi Tyabji this is “not an authorized biography. In fact, it’s not really a biography at all because she’s still premier.” Rather, it is “a book about Premier Clark written by someone who...

Points of Entry: How Canada’s Immigration Officers Decide Who Gets In

Though less controversial than in many other countries, admission of immigrants and refugees to Canada not infrequently raises protests of “too many” or “too few” from partisan commentators, and sensationalised media accounts of particular entry...

When the Kicking Horse Trail opened in 1927, connecting Banff to Golden by route of Lake Louise, parks visitors were presented with a scenic highway system unsurpassed elsewhere in the nation. For a nation that...

Once They Were Hats: In Search of the Mighty Beaver

In Once They Were Hats, Francis Backhouse, who teaches creative nonfiction at the University of Victoria, invites us to join her in exploring the multifaceted history of the beaver. She recounts personal stories about trips...

The Great Bear Sea: Exploring the Marine Life of a Pacific Paradise

The Great Bear Rainforest, a region also known as the central and north coast of British Columbia, has garnered international attention over the last few decades for its global ecological significance and its cultural richness....

Museums and the Past: Constructing Historical Consciousness

Museums and the Past opens with a statement that “‘museums’ and ‘historical consciousness’ dovetail almost intuitively” (3). I don’t think they do, and this book does not convince me. The editors offer a couple of...

Using text and images, this booklet focuses on the varied elements that make up the Royal British Columbia Museum and Archives – its history, physical components (primarily the exhibits), functions, and activities – and on...

To anyone who is familiar with Northwest Coast art scholarship, it will come as no surprise that Bill Holm’s Northwest Coast Indian Art: An Analysis of Form was published anew 50 years after it was...

The short title of the book – Red – shares its name with the 2013 Eiteljorg Contemporary Art Fellowship for Native American Fine Art, which gathered together the work of five notable Indigenous artists: Julie...

The Art of Jeffrey Rubinoff

Jeffrey Rubinoff (1945-2017) is one of the great sculptors in steel of the second half of the twentieth century. In the 1970s and 1980s he exhibited widely in the United States and Canada. Though poised...

The Life and Art of Mary Filer

Naming as Theft and Misdirection

Science, Race, and the Alchemy of Love in Postwar British Columbia

Naming and the Corporation

BC Studies no. 195 Autumn 2017 | Bibliography of British Columbia

Allison Adler recently completed a masters degree in Anthropology with a concentration in Museum Studies from the University of British Columbia. She is primarily interested in how Latin communities are incorporated into museums in the United States and how these communities challenge the borders drawn around their identities through art, material culture, and everyday actions.

Carleigh Baker is a Cree-Métis/Icelandic writer and MFA student who lives as a guest on the traditional, ancestral, unceded territories of the Musqueam, Squamish, and Tsleil-Waututh peoples. Her work has appeared in Best Canadian Essays and The Journey Prize Anthology. Her debut story collection, Bad Endings (Anvil, 2017) is now available.

Davina Bhandar is an adjunct professor in the School of Communications and Department of Gender, Sexuality and Women’s Studies, Simon Fraser University. She is also co-director of the Centre for Policy Studies in Culture and Communities at SFU. Davina is currently the principal investigator of a project examining the labouring lives of South Asians in British Columbia. She is co-editor of “Too Asian?”: Racism, Privilege and Post-Secondary Education in Canada (Between the Lines Press, 2012). She is co-editor of Charting Imperial Itineraries: Unmooring the Komagata Maru (under contract with UBC Press). She works in the areas of democracy, theories of citizenship, migration, carcerality, surveillance, borders and critical race studies.

Penney Clark is a professor in the Department of Curriculum & Pedagogy at the University of British Columbia. Her research is located at the intersection of cultural history, business history, education, and publishing. She is editor of New Possibilities for the Past: Shaping History Education in Canada (UBC Press, 2011) and co-editor, with Mona Gleason, of Historical Studies in Education/Revue d’histoire de l’éducation.

Milena Droumeva is an assistant professor of Communication at Simon Fraser University specializing in mobile technologies, sound studies and multimodal ethnography. She has worked in the areas of game-based learning, acoustic
ecology, urban soundscape research, and most recently gender and sound in video games. Milena has been recording and listening for over fourteen years in Vancouver and Europe as part of her urban soundscapes and mobile media cultures research. You can find her musings on sound and other material goodies at http://natuaural.com

Kate Dubensky is a doctoral candidate in Social, Cultural, and Foundational Studies in the Faculty of Education at the University of Victoria. Her dissertation employs a settler colonial analysis to examine representations of national identity in public school curricula. Kate holds a BA and MA in Political Science.

Imogene Lim (林慕珍) is a professor in the Department of Anthropology at Vancouver Island University. Much of her current work involves communities on Vancouver Island associated with early Chinese Canadians. She also continues to use her restaurant menu collection and family
documents as sources of inspiration and research. Kirsten Emiko McAllister grew up in Nanaimo on Vancouver Island and is now an associate professor at Simon Fraser University. Her research focuses on cultural memory, visual studies and place.

Julia Polyck-O’Neill is an artist, curator, critic, and writer, and is a doctoral candidate in Brock University’s Interdisciplinary Humanities program (Culture and Aesthetics), where she is completing a SSHRC-funded interdisciplinary and comparative critical study of contemporary conceptualist literature and art in Vancouver. She teaches in art history and visual culture, and from 2017-18, is a Visiting Lecturer in Cultural Studies in the department of American Studies at Johannes Gutenberg University in Mainz, Germany.

Helen Raptis is an associate professor of educational history in the Faculty of Education at the University of Victoria. Her research interests focus on minority learners in British Columbia. She is the co-author – with members of the Tsimshian nation – of What We Learned: Two Generations Reflect on Tsimshian Education and the Day Schools (UBC Press, 2016).

Lorraine Weir is currently completing a booklength oral history of the Tsilhqot’in Indigenous title and rights case in collaboration with Chief Roger William and the Xeni Gwet’in community. She teaches Critical Indigenous Studies in the English Department, University of British Columbia where she is a Professor.

Peter Wylie is an associate professor in the Department of Economics, Philosophy and Political Science of the I.K. Barber School of Arts and Sciences, University of British Columbia, Okanagan Campus. He is past Head of the Economics, History, Philosophy, Political Science and Sociology Unit of the Barber School. He holds a BSc (Econ) from The Queen’s University of Belfast and an MA and PhD in Economics from Queen’s University at Kingston, Ontario. He is a long-serving elected member of the UBC Okanagan Senate and currently holds such a seat for 2017-20.