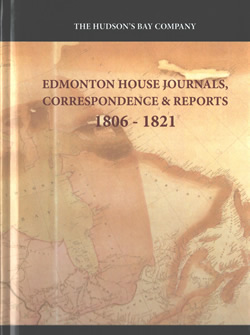 This volume assembles the remaining records (with the exception of accounts) produced between 1806 and 1821 at Edmonton House, the Saskatchewan District headquarters of the Hudson’s Bay Company. This period starts with the 1806 Lewis and Clark expedition and ends with the 1821 amalgamation of the Hudson’s Bay Company (HBC) and North West Company (NWC). Many of the records were produced by James Bird, in charge of the post as Inland Chief after 1803, then Chief of the Saskatchewan District after 1814, and Acting Governor of the Northern Department from 1816 to 1818. The editors utilize the archival sources to provide an effective snapshot of the dramatic economic and social changes taking place at this time, and link them to the major themes of the early contact period in the northern Prairies.

The movements and activities of First Nations are noted, including the impact of the introduction of horses, and the ways in which intergroup alliances and coalitions were formed and dissolved.  The introduction and expansion of the fur trade/capitalist economy is described, with British, Canadian, and American interests trading with local First Nations or bringing in hunters. This contact led not only to a fluid pattern of alliances and conflict with First Nations, but to the emergence of resident freeman and mixed blood/Metis populations. The bitter competition between the North West Company and the Hudson’s Bay Company is described from the perspective of the HBC and the Saskatchewan District. Additionally, the records provide insight into the day-to-day operation of the post, the annual round of the post and the district, and the social environment of the fur trade. This is the period during which economic competition between the HBC and NWC escalated into the1814-1818 Fur Trade War, and it is enlightening to read how this competition and violence was perceived by the managers of the HBC’s Saskatchewan District.

The transcription of the primary documents is well-judged, maintaining their character by integrating some of the quirks of grammar, spelling, and expression found in the originals.  Binnema and Ens have annotated the transcribed documents effectively with biographical, contextual, and explanatory footnotes. Having these on the page with the text, rather than as endnotes, facilitates understanding, and a comprehensive index allows for easy thematic and name searches of the records. Three appendices augment and provide further context for the information presented in the documents. They include a glossary of the terms used to describe the First Nations mentioned, biographies of fur trade personnel, and brief post histories. These supporting materials make the two-hundred-year-old primary documents easily accessible.

A key feature of the book is its excellent eighty-page introduction, “The View from Edmonton House, 1806-1821,” by the editors, Binnema and Ens. Both have worked extensively on the themes, places, and people presented in the primary documents, and their depth of knowledge shines in this interpretive essay. They note the limitations of the Edmonton House records, which represent the perceptions of the HBC managers, whose comments and observations were directed by business strategies and the viability and security of the district’s posts. Binnema and Ens note that in many cases, the HBC was reacting to the more aggressive strategies of the NWC, as well as to changing economic and social conditions among First Nations. They provide an effective historical overview of regional developments in which to frame the HBC records, as well as an overview of fur trade operations and practices in which to locate the historical records.  Notably, the authors offer new interpretations of the events of the 1814-1818 “Fur Trade War,” including the Battle of Seven Oaks, based in part on the observations of James Bird as the HBC District Chief.

Unsurprisingly, this book includes little relating to developments in the New Caledonia and Columbia fur trade districts now included in British Columbia. Prior to 1821 the HBC left the transmontane trade to the NWC, making only a few sporadic efforts in the area. Nonetheless, Binnema and Ens have produced an excellent edited collection of documents, framing the primary records with strong supporting materials and an insightful narrative introduction. For the student of British Columbia history, this book provides insights into the factors that determined the strategies of the fur trade companies as they moved west of the Rockies.