By Jon Bartlett and Rika Ruebsaat 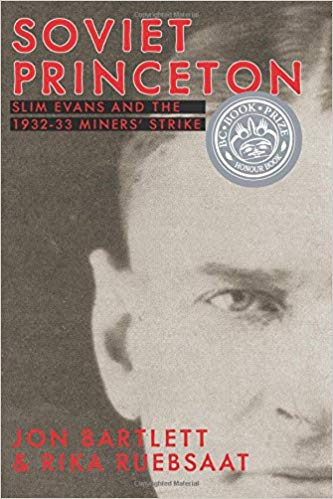 Arthur “Slim” Evans has long been a notable figure in Canadian labour history, most often associated with the famed On-to-Ottawa Trek that he led in 1935 in an effort to improve conditions in the relief camps set up by Conservative Prime Minister R.B. Bennett. The authors of Soviet Princeton have chosen to highlight a lesser-known reason why Evans is historically notable in this account of Evans’s role leading coal mine workers in Princeton, British Columbia, during a strike in the early years of the Great Depression.

The authors set the scene with a brief history of the region, the mining industry that sustained it, and the lives of the local miners that are exploited to sustain the profits of their employer, Tulameen Coal Mines Ltd. The action begins when the miners are faced with a 10 percent pay cut. Angry and determined to fight the cut, they seek help from the radical Communist union organizer Evans.

Evans comes to the mountainous Similkameen Valley town carrying much political baggage and a reputation as an outside agitator. As a young man, he joined the storied Industrial Workers of the World (the Wobblies) and was wounded by machine gun fire in the notorious Ludlow Massacre in Colorado. Five years after its founding in 1921, he joined the Communist Party of Canada, later working as an organizer for the CPC’s Workers’ Unity League after it began in 1929. It was as a WUL representative that he helped start a local of the Mine Workers’ Union of Canada in Princeton.

Such a reputation was grist for the mill of Dave Taylor, editor of the Princeton Star, a mouthpiece for local mine managers, and it provided plenty of excuses for the local establishment to attack Evans. That establishment included “the local board of trade…a vigilante organization founded by the board; by the provincial police,…and by the provincial courts, the government of British Columbia and the federal government” (12).

Evans was met with a vocal anti-Communism shared by those forces, and soon after the arrival of the “red” intruder, a so-called Citizens’ League kidnapped Evans and dumped him on a train heading back to his Vancouver base. Evans hopped off at the next stop and returned to help the miners form a local of the Mine Workers’ Union of Canada and strike the company. The harassment of Evans continued, including a cross-burning incident organized by a klavern of the Ku Klux Klan, but the menacing act did not end the troubles

Soviet Princeton is not a full biography nor is it intended as an academic study. Rather it is a sympathetic treatment of the events involving Evans written in a competent popular style peppered with colloquialisms and generously illustrated with historic photos. It is further enlivened with salacious quotations from the Star and the WUL’s Unemployed Worker, and liberally sprinkled with passages from numerous legal documents, including an excerpt from the dreaded anti-terrorist Section 98 of the Criminal Code.

The authors also provide a thumbnail sketch of the politics of the Depression years and the trend to the left that gave Evans and others “who saw in the hopelessness of the Great Depression a lever to change the course of history” (96).

The book closes with a dramatic account of Evans’s Section 98 conspiracy trial in late 1933. Evans was sentenced to eighteen months in prison, but when he emerged from Oakalla Prison after serving nine months, his penchant for activism was undiminished.

Evans died at 53 in a Vancouver streetcar accident in February 1944, but as the authors agree, he “gave heart (and political direction) to men who would remember it throughout their lives” (44). That makes him a Canadian hero, in my book, and deserving of his prominent place in the annals of labour history.