A Rock Fell on the Moon: Dad and the Great Yukon Silver Ore Heist 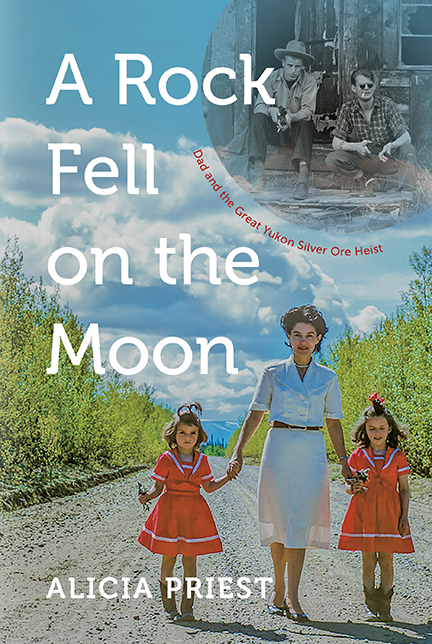 On the surface, Alicia Priest’s memoir A Rock Fell on the Moon: Dad and the Great Yukon Silver Ore Heist is a well-researched and well-written account of Gerald H. Priest’s attempt to steal silver ore from a mine in the Yukon in the 1960s. But under the surface, what sparkles is Priest’s desire to understand her father’s actions and motivations. Did he commit the crime? And why? Her insightful and rewarding journey into the heart of a family illustrates the challenge of ever uncovering what really happened. And, unlike in mining, there’s no heavy lifting; Priest unravels the story in concise and lively prose, and includes fascinating photographs.

Priest begins the story with her ten-year-old self, ruminating on her fate. It is June 1963, and Alicia and her sister, Vona, have been “kidnapped” by their parents and removed from their Yukon home in the town of Elsa to Vancouver, British Columbia. This prologue works neatly to establish and contrast these two key settings and to introduce the Priest family. By writing from a child’s perspective, Priest puts the reader in her shoes, with her limited understanding of events as they developed. Like young Alicia, we are given only newspaper headlines and radio reports, and share her confusion and vague shame about her father’s circumstances. Readers are left – like the daughter – wanting to know what happened.

Before examining the details of the silver ore heist, Priest spends the first fifth of the book setting the stage. The first chapter uses omniscient narration to reimagine the day a truckload of silver ore caught the attention of company manager Al Pike – the event that ultimately led to her father’s arrest. She then details the early lives, courtship, and marriage of her father, Gerald Henry Priest, and her mother, Helen Friesen. She briefly sketches the history of mining in the Yukon, demonstrating the key role that silver has played in the territory, and describing the development of United Keno Hill Mines, Ltd., where her father was employed as chief assayer. Finally, in a chapter entitled “My Elsa,” Priest introduces the town she loved, blending a “tour” of the town’s streets, buildings, and residents with descriptions of her family’s routines and rituals and excerpts from the town newsletter, The Tramline.

With the main characters introduced and the setting established, Priest sets out to reconstruct, in compelling fashion, the crime and its calamitous effects on her family. Her father was investigated, arrested in August 1963, tried, and convicted of stealing silver ore in March 1965. In an epilogue, Priest brings the reader closer to the present as she tries to reconcile with her father and to ask him: “What really happened?”

While she characterizes her father’s version of events as a “long and convoluted fairy tale” (235), Priest uses the historical record to reconstruct the heist and subsequent trial in engaging detail. Her account mines redacted RCMP files, court transcripts, correspondence, and newspapers, and also includes interviews with several people involved in the investigation and trials. The diversity of sources means that Priest’s story of her family’s ordeal is well balanced. Priest neither defends nor condemns her father, and includes multiple and differing opinions of his personality and his actions. These assessments of Gerald Priest demonstrate her commitment to providing a complex, and thus more realistic and interesting, account.

Priest’s historical “bonanza” is undoubtedly the nearly three hundred letters and cards her father wrote to her mother, as well as Helen Priest’s spiral-bound notebooks filled with her thoughts. The letters allow Priest to sketch out her parents’ relationship from beginning to end, while the notebooks offer emotional and occasionally cryptic reflections from a loyal spouse trying to keep her family together. Priest reads them as only a daughter can; they confirm and sometimes contradict her memories of the time. Her parents’ perspectives on events enrich and complicate her interpretation of the written record.

Like glittering veins running through rock, the letters and notebooks transform the book from a “true crime” account into an important record of childhood, marital relations, and emotions in 1960s Canada. Priest’s narrative consistently points to the gendered roles her parents performed. Her father was the indisputable head of his household, and strove to be independent and strong, hiding his fear and uncertainty. Helen, Vona, and Alicia are not portrayed as helpless victims, but they were clearly at the mercy of Gerald’s desires and decisions. Stuck in Vancouver, young Alicia longs for the stable family life she enjoyed in Elsa for nine years, but her adult self suggests that the domesticity and daily routine she craved stifled her restless father, and may have partly motivated his actions.

In contrast to this vivid portrait of family life, Priest’s account of Elsa itself is somewhat muted. It is unclear whether Priest consulted histories of other company towns. While she is careful to recognize that not all residents shared her childhood memories of the town as a “gleaming gem of good things” (43), and does discuss the gendered, classed, and racialized dynamics of life in a company town, Elsa emerges as an idyllic and exceptional place – “a universe apart” (49). However, Elsa shared the characteristics of many company towns in the Yukon and British Columbia, including Alice Arm and Britannia Beach, among others. The lack of broader context here is disappointing. Priest argues her father’s actions may have been spurred on by his mundane work and his relationship to the company, and a closer examination of the complex employee-employer relationship may have given readers an even better understanding of the crime.

While this part of the book left this historian with some unanswered questions, A Rock Fell on the Moon is primarily a memoir, not a history. And it is an exemplary memoir, combining rich description of the Yukon during a mining boom with the details of an almost-successful heist, and offering a rare window into the life, laughter, and loss of a mid-century Canadian family.