Points of Entry: How Canada’s Immigration Officers Decide Who Gets In 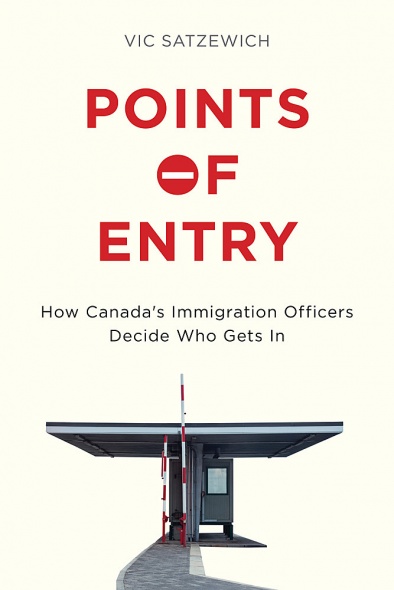 Though less controversial than in many other countries, admission of immigrants and refugees to Canada not infrequently raises protests of “too many” or “too few” from partisan commentators, and sensationalised media accounts of particular entry decisions made by front-line visa officers. The academic literature, too, has frequently questioned policy decisions concerning entry numbers, visa types, and the allocation of admissions to different countries of origin. In this well-researched study, Vic Satzewich shows that while there is an inevitable role for discretion by “street level bureaucrats” in making admissions decisions, that discretion is significantly shaped by a process that would draw Max Weber’s approval: the urgency for state bureaucracy to embody soulless efficiency and productivity.

The author’s willingness to reveal the challenge of gaining initial access to front-line government officers, including a couple of false starts, will be especially encouraging to young researchers facing their own difficulties in accessing “the field.” Data are drawn from statistical files on immigrant admissions from Immigration, Refugees and Citizenship Canada (formerly CIC, Citizenship and Immigration Canada). More important, however, are 128 informative interviews with staff at eleven overseas visa offices. In addition, forty-two interviews between visa officers and applicants were observed by the author. The frequent and sometimes lengthy statements from officers dealing with both temporary and permanent applications add both vitality and persuasiveness to the text.

Satzewich declares that “this book is about what I call the ‘social constitution of discretion’” (16). After an initial chapter provides a review of critical literature on admissions policy, some of which suggests racial bias, Chapter 2 then turns to a consideration of the components of officer discretion. Next, statistical data on admissions show the high proportion of successful applications for permanent residence (83 percent in 2010), with no discernible bias based on applicants’ race or region of origin. Successive chapters, drawing heavily on the interviews in overseas visa offices, examine applications requesting spousal sponsorships, skilled worker admission, and visitor entry.

Satzewich demonstrates that bureaucratic pressures militate against decision bias in admissions, indeed against the refusal of applications overall. CIC processed 1.36 million applications in 2010. Caseloads for individual visa officers are very high. Overall an officer processing applications for temporary visas declared that she must complete an application in three minutes! Consequently, an “obsession with productivity” (121) controls daily work practice. A possibly fraudulent file requires an interview, and an interview devours valuable processing time. Too many time-consuming interviews will bring attention to an officer and to a visa station because they will not be meeting their processing target, inviting castigation from senior mandarins in Ottawa. Moreover, refusals may go to appeal, and the appeal court is commonly lenient. While fraud is not uncommon in applications, suspicions have to be well founded for refusal to occur. The working decision model is to discern the balance of probability of a truthful application, with a pass mark in principle at 51 percent (143). In the social construction of officer discretion for approving or rejecting applications, a productivity mandate exercises a primary impact. As a result, Satzewich suggests that if there is officer bias, it is a bias in favour of acceptance. The exercise of officer discretion need not lead to negative outcomes for applicants.

Points of Entry is a well-written, accessible volume. It makes transparent the formerly hidden exercise of decision-making by Canada’s admissions officers, and in so doing challenges an often critical literature that has presumed entry bias without the test of evidence.