The Art of Jeffrey Rubinoff 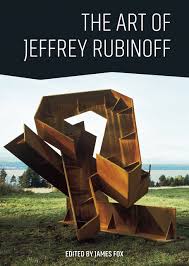 Jeffrey Rubinoff (1945-2017) is one of the great sculptors in steel of the second half of the twentieth century. In the 1970s and 1980s he exhibited widely in the United States and Canada. Though poised to be a major figure in the modern sculpture scene, in the early 2000s Rubinoff chose to concentrate on creating an extraordinary sculpture park on Hornby Island, British Columbia. The f ifty-hectare Jeffrey Rubinoff Sculpture Park grew into an outdoor art experience with more than one hundred sculptures arranged in nine series, each fully integrated into the landscape and natural beauty of the surroundings. Rubinoff spent countless hours touring visitors and scholars around the vast acreage of the park so that he could share his sculptures. The relative isolation of Hornby Island and Rubinoff ’s rejection of the art market – in the last two decades he refused to sell any of his work or to permit his sculptures to be shown outside the park – have, until recently, left the artist relatively removed from the public eye. The Art of Jeffrey Rubinoff is the first major account of his remarkable career.

The volume’s editor, James Fox, is an art historian and fellow of Gonville and Caius College, Cambridge. Having first visited the Jeffrey Rubinoff Sculpture Park in 2011, Fox subsequently brought twelve scholars from the United Kingdom, the United States, and Canada to Hornby Island to experience the sculptures and to contribute to the volume. Their twelve chapters are grouped into three interrelated sections. Section 1, “Making and Meaning” (Chapters 1-4), establishes the foundational principles of Rubinoff’s artistic thought, including his work methods (Barry Phipps); the implications of Rubinoff’s use of steel (James Purdon); how viewers should interpret his works (Alistair Rider); and the formative influence of David Smith on his early work (1983) (Joan Pachner). Section 2, “Space and Time” (Chapters 5-8), explores the sculptures that comprise Series 3 as an exercise in spatial articulation (James Fox); the influence of Rubinoff’s architectural work in the 1970s on his later sculptures (Mark E. Breeze); the notion of “progress” as a commitment that can be traced across Rubinoff’s work (Tom Stammers); and the opposing position, that the defining temporal implication in the park is one of “decline” (Alexander Massouras). The final section, “Nature and Culture” (Chapters 9‒12), examines Rubinoff’s relationship to his environment (David Lawless); to the broader art scene in postwar Canada (Maria Tippett); to his Jewish heritage (Aaron Rosen); and to his political and ethical thought (Peter Clarke).

All chapters draw heavily on primary sources, making available for the first time interviews and correspondence with Rubinoff, uncatalogued archives, and unpublished documents. With fifty colour images, the volume thoroughly documents the visual and textual context of Rubinoff’s life and work. The Art of Jeffrey Rubinoff is an engaging collection of chapters by scholars who have experienced Rubinoff’s sculptures firsthand at the sculpture park built and designed by the artist. Taken together, the twelve chapters offer a compelling portrait of Rubinoff, his sculptures, and their artistic, cultural, and philosophical foundations.