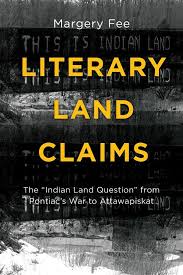 Amidst the celebrations for the 150th anniversary of Canada’s confederation this year, scholars and citizens alike are calling for national reflection on what this anniversary is meant to commemorate. To this end, Margery Fee’s Literary Land Claims is timely reading. Beginning with the question of how literature claims land, Fee draws our attention to the ways our stories support or trouble the settler claims to Indigenous territories that constituted the founding acts of the Canadian nation-state. By exploring a refreshing range of textual material, Fee also challenges what counts as ‘literature’ in the Canadian cannon and makes space for diverse voices. Alongside the more conventional fare of literary studies seen in John Richardson’s early Canadian fiction and Tekahionwake/E. Pauline Johnson’s poetry and dramatic works, Fee’s chapters focus on the transcripts of Louis Riel’s final court hearing, Archibald Belaney/Grey Owl’s conservationist writings, and Syilx elder Harry Robinson’s oral histories. Together with a conclusion that engages the public discourse around Idle No More, Attawapiskat, and the Truth and Reconciliation Commission on Residential Schools, Fee analyzes texts from 1796 to 2013. Importantly, she teases out the entangled ways in which “identity is connected to land rights” in this country, marshaling an impressive depth and breadth of knowledge relating to Canadian literary criticism and the history of Indigenous-settler relations (3).

The main chapters offer bold re-readings of well and lesser-known works by authors who possessed “varying relationships to Indigenousness and therefore to land” (2). Other than Robinson, her subjects are not easily located into the categories of Indigenous or Canadian, in their time or in ours. The question of identity here is critical to Fee’s broader concerns about the legitimacy of Canada’s claims to land. She thoughtfully unpacks the social and legal contexts that shaped how figures as diverse as Richardson, Riel, Johnson, Belaney, and Robinson lived, wrote, and spoke. She demonstrates how all five expressed “dissident positions” in their own time with respect to the prevailing narratives on what it meant to be Canadian or Indigenous, and how land rights accrued or were denied to people as a result of how successfully they could be slotted into one category or the other, or work them to their advantage.

Some of Fee’s subjects, however, are more easily apprehended as dissidents than others, which is the great strength of this fascinating book. Fee characterizes the current critical climate in Canada as one in which “[a]gonizing discussions about who is authentically Indigenous often overwhelm discussions about the content and quality of what people actually did, said, or wrote” (3). Her refusal to allow her own readings to be similarly overwhelmed produces sensitive interpretations that challenge her readers: it is the skillful analysis of figures as controversial as Belaney, for example, that makes this work so compelling. Throughout, Fee encourages us to understand her subjects for the complex positions they inhabit in relation to a set of stories about Canada, the land, and Indigeneity in distinct historical periods. She asks that we resist dismissing those whose biographies and behaviours confound easy categories, and at the same time offers accounts that are at once redemptive and acutely conscious of her subjects’ limitations.

The result is a rich and thoughtful book which will appeal to anyone writing or teaching in fields relating to settler-colonial, Canadian, and Indigenous studies. Historians in particular will find Fee’s chapters a valuable complement to the original texts she discusses.