Christy Clark: Behind the Smile 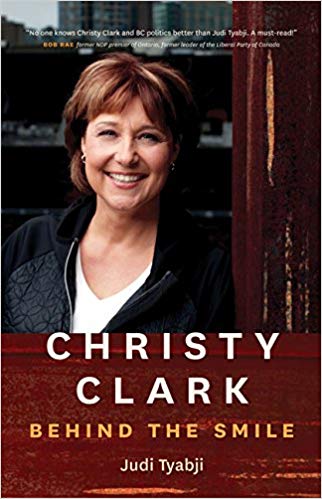 According to Judi Tyabji this is “not an authorized biography. In fact, it’s not really a biography at all because she’s still premier.” Rather, it is “a book about Premier Clark written by someone who has known her, through politics, since the mid-1980s” (1) when both were university students. Although it sometimes wanders from the subject of Clark, the book looks like a biography with even a seven-page long analysis by a psychologist of what Tyabji calls “The XX factor” in politics, the role of gender. The book includes a chapter on Clark’s childhood, complete with a baby picture; several comments on her father’s influence; references to her former husband and political operative Mark Marissen, and their son; accounts of her career as host of a talk show; and discussion of the role of her older brother, Bruce, in getting her nominated and elected in 1996, and in organizing her successful campaign for the Liberal leadership in 2011.

Tyabji, who says their relationship was as colleagues, not friends or buddies, is well-placed to write about Clark since she too served as a Liberal Member of the Legislative Assembly. Their terms, however, did not overlap. Tyabji broke with the party and was defeated in 1996, the year that Clark was elected. And Tyabji ended any relationship with Clark after Clark attacked Gordon Wilson (Tyabji’s husband) who was then an NDP cabinet minister. Tyabji also thought that Clark “sold out” by becoming Campbell’s deputy premier in 2001 (184). In 2013 Tyabji changed her mind after visiting the Okanagan and chatting with family members engaged in the wine industry. After Tyabji told Wilson that Clark was doing a good job as premier, he made a YouTube video endorsing Clark and, with Tyabji, insured that it was well publicized.

Tyabji rightly concedes that the book often says more about her and Wilson than about Clark (311). As for Wilson’s appointment in 2013 to the plum job of LNG (Liquefied Natural Gas) Buy BC Advocate, Tyabji quotes some negative press comments, but has Wilson explain that he endorsed Clark’s idea that the LNG project would generate wealth for the province and reduce pollution in such places as China.

Tyabji’s main sources of information are news reports, political columnists, and her own interviews with politicians, elected officials and party organizers both Liberal and NDP, several First Nations leaders, and others. She quotes extensively – often a page or more – from her informants. Apart from some First Nations leaders, only Guy Monty, a wildlife consultant, was willing to speak negatively of Clark on the record. Thus, he is quoted on many issues unrelated to his expertise. The quotations from opposition politicians such as Moe Sihota, a former NDP cabinet minister, are quite benign. The long extracts from newspaper columns or interviews are tedious and suggest hasty writing. Nevertheless, buried in some interviews are glimpses of divisions within the Liberal party.

In the longest chapter – forty-three pages – Tyabji declares that the greatest accomplishments and conflicts of Clark’s government have concerned the First Nations. Tyabji suggests that Clark’s relationships with the First Nations are influenced by the friendships she developed with aboriginal people during childhood summers on the Gulf Islands and the belated discovery of First Nations cousins, the descendants of a great-uncle. As Minister of Education, Clark instituted what Tyabji calls successful measures to increase the number of aboriginal high school graduates. Several First Nations leaders give opinions of Clark and her policies ranging from complaints of inaction on matters of rights and titles to an appreciation of her willingness to talk to them and respect their culture. Incidentally, they reveal divided opinions among the First Nations on other matters.

The book introduces some new information especially about the inner workings of the Liberal party, but leaves some subjects hanging. For example, it mentions the Nisga’a Treaty but does not explain why it was so unpopular or why Clark voted against it in 1999. Tyabji notes that Clark’s cabinet vetoed the appointment of George Abbott as chief commissioner of the BC Treaty Commission without indicating whether the decision was based on perceived problems with Abbott or with thoughts of disbanding the Commission.

Most chapters begin with an epigraph from the best-seller, The Road to Character by David Brooks, a conservative New York Times columnist. According to Tyabji, it is Clark’s favourite book and her copy is dog-eared and full of notes. The book was published in 2015.

Tyabji’s goal was to provide “a bit of context to understand the unique leadership of Premier Christy Clark” because she “felt the portrayal of her as a heartless, arrogant, corporate sellout did not match the truth about her or the work she was doing on our behalf” (10). Despite Tyabji’s disclaimer, the book falls into the genre of biography, specifically the sub-category of campaign biography, a fact underscored by references to the forthcoming 2017 election. Tyabji concludes that Clark’s political success rests on her ability to bounce back from reverses, her willingness to delegate power to cabinet ministers, her ability to engage with voters, and, of course, her smile.  Will the smile carry her through the 2017 election and the divisive issues that are likely to arise?