A Great Rural Sisterhood: Madge Robertson Watt and the ACWW 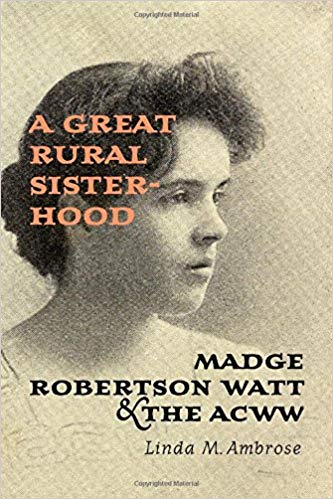 In A Great Rural Sisterhood, Linda Ambrose has taken on the challenging task of telling the life story of a woman who left behind no personal diaries or papers and only a fragmented paper trail. Through her impressive archival efforts, Ambrose has put together a rich and detailed portrait of Margaret “Madge” Robertson Watt that highlights her contributions to early twentieth-century rural and international women’s activism.

In part, this book is a straightforward biography – an achievement in itself given the many twists and turns along Watt’s life path. More interesting, though, is the way in which Ambrose uses Watt’s life as a launching point to explore several themes in early twentieth-century women’s history. The first two chapters outline Watt’s formative years, including her time at the University of Toronto and her subsequent position as editor of the popular Toronto-based Ladies Pictorial Weekly, a remarkable position for a 24-year-old woman. Ambrose uses this period of Watt’s life as a window into the complexities of the “New Woman.” In her articles about marriage, higher education for women, paid work, and motherhood, Ambrose suggests, Watt represented a “transitional” type of womanhood between Victorian social expectations and New Woman ideology. Historians interested in the entanglements of gender, class, and feminism in the early twentieth century will find much to ponder here.

The bulk of Ambrose’s study focuses on Watt’s career as an organizer and expert on rural women’s issues. She was a key figure in the Women’s Institutes (WI) movement, beginning in Metchosin, British Columbia, where she moved with her husband in 1893. After her husband’s death in 1913, she moved to England where she spent the wartime years establishing the first WIs in the UK. Ambrose positions Watt as a key figure in interwar transnational women’s activism, suggesting that she represented the strength of imperial feminism. Less convincing is Ambrose’s assertion that Watt undertook an act of “reverse colonialism” by transplanting ideas about rural women’s organizing from Canada to the mother country. Considered alongside the rich historiography of colonialism in Canada, calling Watt’s actions “reverse colonialism” seems to skirt the real and important issues of racial, class, and gender oppression at the heart of the colonial relationship between Canada and Britain. Ambrose’s analysis is stronger, though, in her discussion of the complex “sentimental ties” between Canada and the UK that shaped much of women’s activism at the time (98).

Eventually, Watt’s work with rural women around the globe culminated with her role as co-founder of the Associated Country Women of the World (ACWW) in 1933. It’s in Watt’s work with this important international organization that Ambrose is able to provide rare glimpses into her personality. Watt’s desire for self-promotion and recognition as an expert of international rural women’s issues often led her to clash with other members of the ACWW executive, especially those whose responsibility it was to rein in her spending on overly ambitious international speaking tours and conferences. In these sections, Ambrose reminds us that the formation of “great rural sisterhood” was also a story about cooperation and conflict between individuals. In doing so, Ambrose humanizes this sisterhood and offers a fascinating portrait of what it meant to build an international movement of women.