Aqueduct: Colonialism, Resources, and the Histories We Remember 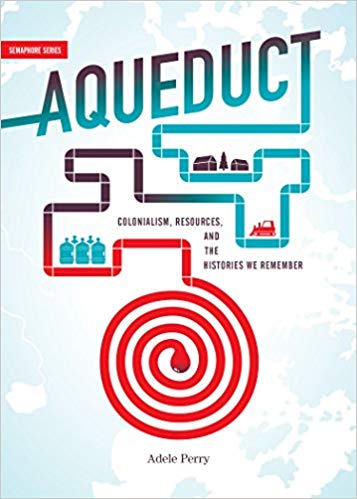 If, as Adele Perry suggests, history is cacophony, then the opening of Winnipeg’s Canadian Museum of Human Rights (CMHR) in September 2014 was bound to be discordant. Camped outside the CMHR, Anishinaabe from Shoal Lake 40 First Nation and Pimicikamak Okimawin greeted the public and visibly reminded them of one of the colonial ties that bind their respective communities together: the Greater Winnipeg Water District Aqueduct.

Stretching from Shoal Lake on the Manitoba-Ontario border to Winnipeg, the Aqueduct’s construction between 1914 and 1919 ensured citizens and industry alike a safe and reliable source of water. A different story prevailed at Shoal Lake. Civic officials, aided by the Crown, expropriated prime reservation lands without local consent; officials’ cost-saving decision to build a dyke to divert swampy water from the Aqueduct’s intake marooned the Indigenous community on an artificial island. Though Anishinaabe water courses through its exhibits, the CMHR remained oblivious to Shoal Lake’s struggle to survive its ongoing geographic, political, and economic isolation.

Aqueduct is a brief yet poignant exploration of these submerged histories. In this latest offering from ARP Books’ Semaphore Series, Perry pursues two objectives in arguing that the Winnipeg Aqueduct “is Canadian colonialism in scale model and technicolour” (15). First, Aqueduct continues Perry’s longtime assertion that transnational history is a viable framework for understanding the nature of Canada’s colonial project, while not losing sight of the localized experience of settler colonialism. While Chapter 2 details the violent emergence of the classed and racialized urban geographies of later nineteenth-century Winnipeg, it is in Chapter 3, “Water and City,” where Perry brings into focus the links between the local and the transnational. She shows that when local water supplies limited “capitalist profit and urban growth,” outside technological and engineering expertise proved crucial. Turning to American experts in 1897, 1905, and during the Aqueduct’s construction, civic leaders enmeshed themselves “within a continental, settler world and in doing so reframed the city’s ongoing location within the British Empire” (38).

Second, and I think more importantly, Aqueduct rewrites public pasts that erase Indigenous histories of the Aqueduct’s construction and thus sustain ongoing settler indifference to the plight of Shoal Lake 40. In Chapter 5, Perry takes persistent aim at this “language of Indigenous absence” by highlighting the few traces of Indigenous presence found within the “official” record of the Aqueduct’s construction. “In archival fragments likes these,” Perry observes, “the Indigenous history of the Aqueduct surfaces, awkwardly disrupting the settler celebration and Indigenous erasure that undergirds the planning and building of the Aqueduct” (55). Perry uses this juxtaposition to great effect in the final chapter. Contemporary Anishinaabe voices unsettle the official narratives of the Aqueduct’s past, propagated by commemorative plaques scattered across Winnipeg and in the halls of the CMHR – that “towering shrine to hypocrisy,” in the words of Indigenous community leaders (96).

Aqueduct is an accessible counter-hegemonic history, and makes an ideal primer for both the general reading public and undergraduate students to explore the colonial histories that shape the spaces they inhabit. Purchasing the book would also be an ethical choice: all royalties from Aqueduct go to Shoal Lake 40’s Freedom Road fund which sustains the community’s on-reserve Canadian Museum of Human Rights Violations. Aqueduct, then, allows readers to put their money where their mouth is and make a small contribution to the process of decolonization.