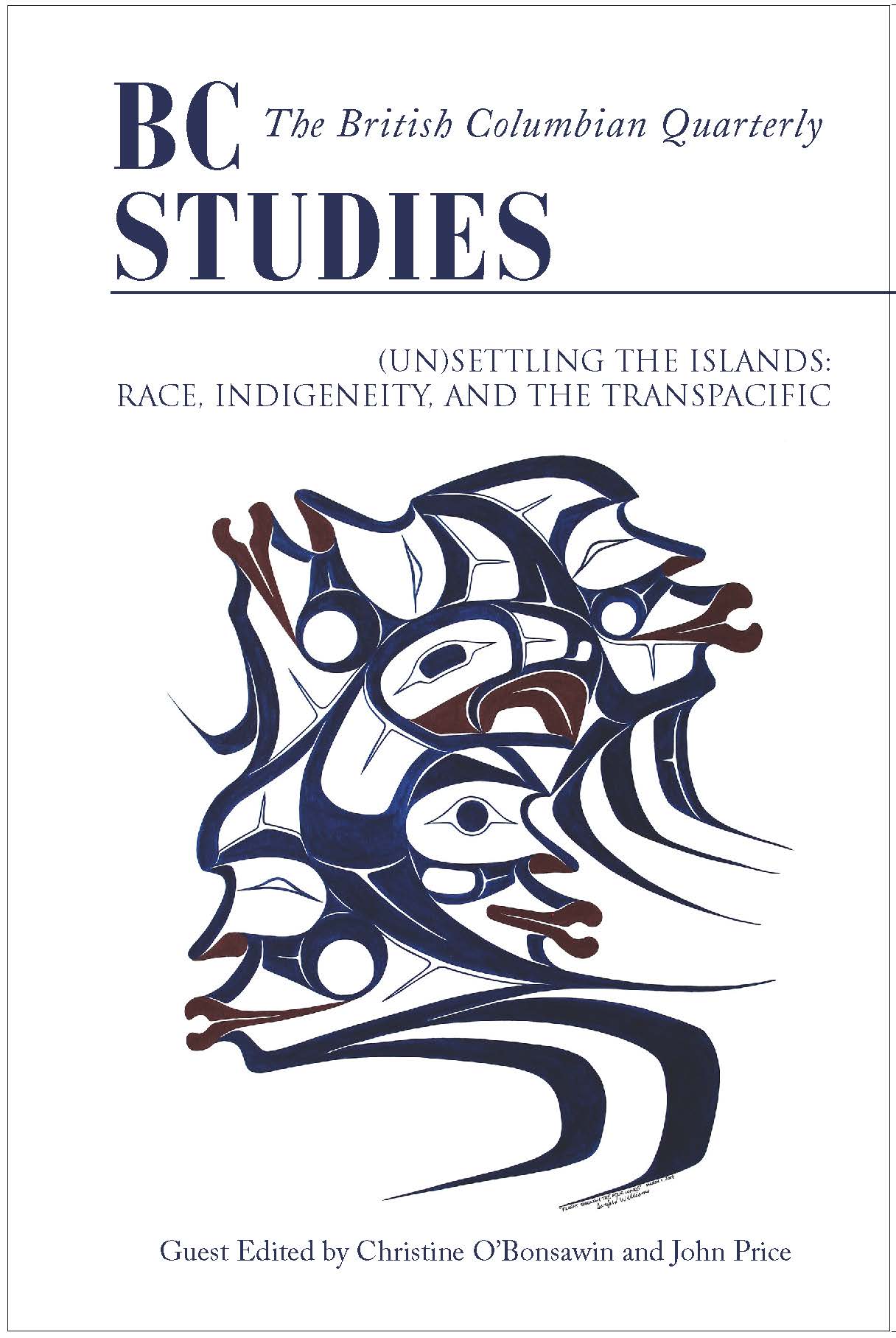 (Un)Settling the Islands: Race, Indigeneity and the Transpacific, co-edited by Christine O’Bonsawin and John Price, showcases a unique collection of articles that explore Indigenous and Asian Canadian histories from Vancouver Island and beyond.

Recommendations for Redressing Historical Wrongs against Japanese Canadians in BC (excerpt)

A Historic Day for BC First Nations. Now the Work Starts: UNDRIP starts us on a journey, but without work, co-operation and shared vision we will be lost

Commemorating John A. Macdonald: Collective Remembering and the Structure of Settler Colonialism in British Columbia

Whose Land Is It? Rethinking Sovereignty in British Columbia

The Murakami Women of Saltspring Island

The Soyokaze: A Gentle Wind That Weathered the Storm

Lifting the Veil on Nanaimo’s Nikkei Community: From Settlement to Return

Working Towards Equity examines the intersection of the contested nature of disability movements and activism and decision maker actions related to labour market activity in late 20thcentury Canada. Galer’s argument is that advances in labour...

Sarah Nickel’s Assembling Unity: Indigenous Politics, Gender and the Union of BC Indian Chiefs is a significant contribution, not only to the history of Indigenous affairs in British Columbia, but to Indigenous history as a...

State-sponsored impoundment and “improvement” of rivers is nothing new, and much ink has been spilled documenting the social, ecological, and fiscal impacts of dams. In spite of growing awareness of these costs and declarations from...

The foundation of Professor Jane Dickson’s book, By Law Or in Justice, is her work as a Commissioner for the Indian Specific Claims Commission, from 2002 to 2009. The Commission itself endured from 1991 to...

At Home in Nature: A Life of Unknown Mountains and Deep Wilderness

Many people dream of “getting away from it all” (where “it” is usually some version of congested urban life). Few of us realize this dream, of course, and only a handful write about the experience....

Shirley D. Stainton’s Children of the Kootenays: Memories of Mining Towns describes her own and her brother Ray’s childhoods in West Kootenay mining communities during the 1930s and 1940s. Stainton’s father, Lee Hall, was a cook...

Tamara Starblanket is a Nehiyaw (Cree) legal scholar from Ahthakakoop First Nation and is currently the Dean of Academics at the Native Education College in Vancouver, which is located on the traditional territories of the...

James Teit was an amazing community-based engaged anthropologist long before such labels were invented. Wendy Wickwire’s anthropological life story of Teit is a consummate account and indeed, as the top of page advertisement exhorts, it...

Dreamers and Designers: The Shaping of West Vancouver

On The Line is an account of BC trade unions by the BC Labour Heritage Centre (an offshoot of the BC Federation of Labour) written by retired Vancouver Sun labour reporter Rod Mickleburgh. In a well-illustrated...

Return of the Wolf: Conflict and Coexistence

In his famous study Of Wolves and Men (1978), Barry Lopez pertinently noted that ‘the wolf exerts a powerful influence on the human imagination. It takes your stare and turns it back on you.’  Paula...

With its over 250 prose and poetry narratives, biographies, and recipes, Rachel Rose has edited a timeless anthology,  Sustenance: Writers from BC and Beyond on the Subject of Food. Rose, named Vancouver’s poet laureate in 2014,...

Beth Boyce is the curator and education manager at the Museum at Campbell River. With a bachelor of arts in history from the University of Victoria and a master’s degree in art conservation from Queen’s University, she is every day inspired by the peoples of this coast, and grateful for the opportunity to preserve and share their stories.

Zhongping Chen is professor of Chinese history at the University of Victoria. He has research interests in environmental and socioeconomic history of China during the Little Ice Age (1400–1900), sociopolitical history of late Qing and early Republican China, and the history of the global Chinese diaspora. His publications include dozens of journal articles and four books in Chinese and English, especially the monograph Modern China’s Network Revolution: Chambers of Commerce and Sociopolitical Change in the Early Twentieth Century (Stanford, CA: Stanford University Press, 2011). He has been working on a book manuscript, “The Rise, Reform and Revolution of the Transpacific Chinese Diaspora, 1788–1918.”

Nick Claxton’s Indigenous name is XEMŦOLTW̱ and he was born and raised in Saanich (W̱ SÁNEĆ) Territory. He is from the STÁUTW̱ community of the W̱ SÁNEĆ Nation. Nick received his master’s in Indigenous Governance and his doctorate through the Faculty of Education at the University of Victoria. He is an assistant professor in the School of Child and Youth Care at the University of Victoria. His research interests are in the revitalization and resurgence of Indigenous land-based knowledge in Indigenous youth. He teaches through experiential and land-based learning, and likes to be out on the lands and waters of his territory.

Masako Fukawa is a retired school administrator and teacher, as well as a writer and editor specializing in the story of Japanese Canadians. Fukawa co-authored the award-winning Spirit of the Nikkei Fleet (Harbour Publishing, 2010), written with her husband Stanley Fukawa, and a book for young readers, Righting Canada’s Wrong: Japanese Canadian Interment in the Second World War (James Lorimer, 2011), written with Pamela Hickman. Fukawa is also the author and editor of collected materials, teacher resources, and websites on related topics, most recently contributing to Witness to Loss (McGill-Queen’s University Press, 2017), edited by Jordan Stanger-Ross and Pamela Sugiman. Masako Fukawa lives in Burnaby, BC.

Margarita James is a long-time resident of Tsaxana, near Gold River on Vancouver Island, BC. She enjoys family, food, and the history of the area.

Christine O’Bonsawin (Abenaki, Odanak Nation) is an associate professor of Indigenous studies and history at the University of Victoria. Her scholarship in Indigenous studies and sport history takes up questions regarding the appropriation and subjugation of Indigenous peoples, identities, and cultures in Olympic history. Christine’s recent scholarship has mainly focused on the legal and political rights of Indigenous peoples in settler colonial Canada, particularly in hosting the Olympic Games on treaty lands as well as unceded Indigenous territories. She is a co-editor and contributor for the Journal of Sport History Special Edition: Indigenous Resurgence, Regeneration, and Decolonization through Sport History (2019) and Intersections and Intersectionalities in Olympic and Paralympic Studies (2014).

John Price is professor emeritus at the University of Victoria where he taught Japanese, Asian Canadian, and Pacific history for twenty-one years. He is the director of the SSHRC-funded project “Asian Canadians on Vancouver Island: Race, Indigeneity and the Transpacific,” the author of Orienting Canada: Race, Indigeneity and the Transpacific (UBC Press, 2011), and A Woman in Between: Searching for Dr. Victoria Chung ((Chinese Canadian Historical Society of British Columbia, 2019), co-authored with Ningping Yu.

Brian Smallshaw is a historian specializing in Japanese Canadian history. He studied and lived for many years in Japan, editing a trade publication for the Japanese government and importing computer networking equipment. He has a master’s degree in history from the University of Victoria and a bachelor’s degree in sociology from the University of Regina and Sophia University in Tokyo. He lives on Saltspring Island, BC.

Timothy J. Stanley is professor emeritus in the Faculties of Education and Arts of the University of Ottawa. His award-winning historical research, including his 2011 book Contesting White Supremacy: School Segregation, Anti-Racism and the Making of Chinese Canadians (UBC Press), focuses on racism and Chinese Canadian experience, with a special emphasis on the City of Victoria. His current research examines links between historical remembering and contemporary racisms.