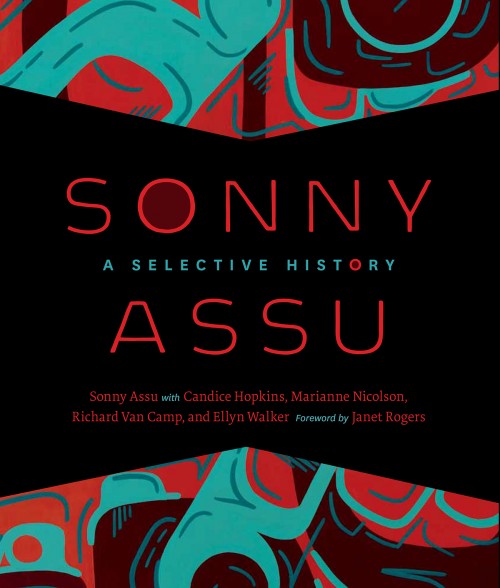 This comprehensive survey of Sonny Assu’s work is prefaced by four incisive essays by prominent indigenous scholars and curators. This beautifully designed and thoughtfully organized book covers significant phases in the Kwakwaka’ wakw artist’s career, punctuated by key quotations illuminating his artistic philosophy. Among the text’s the most poignant words are the artist’s own reflections on his personal history, beginning with his deep affection for his grandfather– a seine boat fisherman who early on recognized that his grandson would take a different path. Unknown to the senior Assu, who encouraged him to pursue a law career, Sonny’s activism on behalf of his people would emerge in the studio and not the courtroom.

The book traverses the significant works and series that make up the artist’s production over a period of roughly fifteen years, beginning in 2002. Included are early pop-culture infused works such as Coke-Salish (a theme to which he would later return), iterations on drums, and sculptures such as his rough-hewn solid cedar masks and his grandmother’s school desk.

In the Propaganda series the artist describes his explorations of indigenous iconography intermingled with typographical elements that critique racist colonial policies. Other series, such as The Longing and Artifacts of Authenticity, touch on the importance of cedar to the Kwakwaka’ wakw and how museological display affects the perceived value of art. In Billy and the Chiefsand Ellipsis, Assu’s vivid imagination is applied to honouring significant aspects of Kwakwaka’ wakw history: in this case, the recording of traditional songs for academic purposes that were simultaneously banned from performance by colonial laws.

In Interventions on the Imaginary, Assu inserts indigenous ovoids, u-shapes, and formline designs into scans of historical works by artists such as Emily Carr and others, disrupting their depictions of the unpeopled landscape as “terra nullius.” The artist conceives these interventions as “acts of resistance toward the colonial subjugation of the First People.” Throughout these works Assu’s critical awareness, his mastery of form, and fearless remixing of traditional and contemporary themes provides a wealth of opportunity for aesthetic and scholarly appreciation.

In addition to the essays, the book is liberally illustrated with full-page, full colour photographs of the artist’s works. There are multiple selections from each of his series. Sonny Assu: A Selective History is a necessary addition to an understanding of this artist’s work and contemporary indigenous art in Canada and beyond.