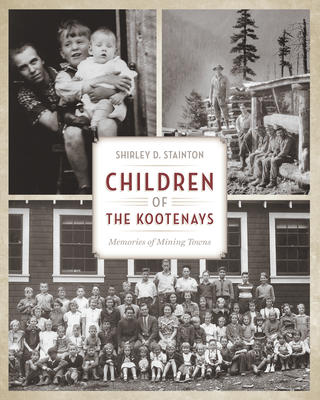 Shirley D. Stainton’s Children of the Kootenays: Memories of Mining Towns describes her own and her brother Ray’s childhoods in West Kootenay mining communities during the 1930s and 1940s. Stainton’s father, Lee Hall, was a cook who worked in camps and towns across the region as mines opened and closed. Hall’s working life reveals well the effects of capital’s intensive, transient development of the Kootenays’ mineral veins. His jobs rarely lasted for more than a few years, and he moved on with his family as working conditions deteriorated or companies abandoned operations and workers and their families dispersed. Among other communities, Hall worked in Sandon, Camborne in the remote Incomappleux valley, and in Sheep Creek south of Nelson – a place that reached a population of a thousand before the companies closed the town’s mines during the Second World War. Stainton deeply admired her father and her mother, Jennie, who worked hard, and, despite economic uncertainty, kept their family together and gave their children happy childhoods. Stainton notes that, “I never questioned our moving around; I just went with my brother and my parents wherever ‘that’ was. I have always been grateful that they never left me behind.” (72) In the 1940s, when the companies abandoned Sheep Creek, Stainton’s parents moved to Nelson where her father eventually found work for the Nelson Street Railway Company. By that time, Stainton was boarding in the city to attend Nelson High School. Ray had also left home and was planning to become a miner. In 1943, however, he was sent overseas with the Seaforth Highlanders and was killed in action in the Liri Valley in 1944.

Stainton’s memories of her growing up, assembled by her daughter and granddaughter, make a significant addition to West Kootenay social history. Writers about the region have emphasized the hard rock mining frontier’s “roaring days” of the 1880s and 1890s that saw capital develop mines, smelters and railway lines, the emergence of Nelson, Rossland, and Sandon as significant cities, and the creation of a working class of miners and their union. Stainton’s memories, on the other hand, portray life and work in West Kootenay communities as the hard rock mining era was coming to an end during the 1930s and 1940s. She recalls communities made up of families and single men of Canadian and northern European background, of close friendships with the children of neighbour families and with her brother, of houses with few pieces of furniture and with no indoor plumbing, siding or insulation, and of her enjoyment of her few toys, gifts, books, and the pieces of stylish clothing made for her by her mother. Stainton notes that her mother dreamed of a house with a bathtub, that the children of Sheep Creek played in a creek polluted with arsenic and cyanide by the mines, and that her father quit his job when the companies tried to reduce costs during the depression by providing inferior food to the miners.  At the same time, Stainton feels that her family’s regular moves led to her spirit of adventure and ability to throw herself into trips to the Slocan Valley, Nelson, and Manitoba to visit family, to schooling, sports and social activities, and to life as a high school student in wartime Nelson.  Stainton remembers a generally happy childhood in the Kootenays while also referring to her family’s grief at the loss of her brother and of the difficulties of growing up in any era.

Shirley Stainton’s memories return life to working class communities of the West Kootenay before the Second World War. Many family and community photographs illustrate her detailed descriptions.  Stainton’s memories also provide information for the book’s important town site sketches of the abandoned communities of Camborne and Sheep Creek. The town site sketches suggest the life of the communities where Stainton grew up. They also point to the precariousness of work in communities that companies abandoned because, as Stainton puts it, “the mine was no longer profitable enough…to keep…open.” (120). Children of the Kootenaysdescribes well what it was like to grow up in these communities; it also evokes the memories of a fun-loving brother and of hardworking parents.