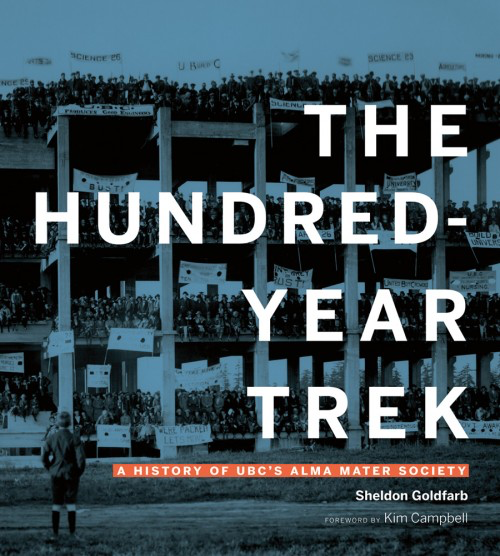 To borrow an old joke, institutional histories can often be the sofa beds of historical writing. Neither good as a sofa nor as a bed, institutional histories can often find themselves trapped between academic and local audiences, and can become the worst of both worlds. To the credit of Sheldon Goldfarb and the UBC student society (called the Alma Mater Society or AMS), The Hundred-Year Trek has avoided this trap by committing to be a popular history of the student association’s operations at UBC. The result is a very readable, beautifully illustrated coffee table book that offers an incredibly detailed account of the foibles of the student union at BC’s largest university. Although historians might be disappointed that the book does not contribute to the existing literature as much as it might have, former students of UBC will likely enjoy the invitation to wander the Main Mall again, as captured in hundreds of photos of UBC over its century of existence.

The book is formatted as a year-by-year account of the goings-on in the AMS. Goldfarb, who is the archivist for the AMS, is a lively writer who works in a good joke here and there, and the book moves quickly. The majority of the material is drawn from the pages of UBC’s student newspaper The Ubyssey, with a special focus on AMS politics. Goldfarb traces several themes through the years, including the ways in which UBC students drew on Indigenous symbolism, the student campaigns to develop the campus, and the changing culture of the AMS itself. The book’s perspective, which places students and their union at the centre of the story of UBC, is unique and valuable.

For readers who are more interested in the social history of BC, though, or especially who are interested in the history of higher education, The Hundred-Year Trekcan feel like a missed opportunity. For example, there is very little discussion of how and why UBC’s student population has changed over time. The arrival of women on the campus in the 1920s and 30s gets a few brief mentions but very little discussion (though there is a bit more attention in the post-WWII era); the expulsion of Japanese-Canadian students in 1942 receives one paragraph, half of which is about a 2012 apology (70); the veterans flooding onto the campus after WWII merits only two small paragraphs (80); the changing racial makeup of the campus is only discussed through the lens of AMS elections (96); the changing class position of UBC students after the War is noted only obliquely and in passing in a discussion of funding (112). Readers hoping to get a deeper sense of the history of higher education in BC will often find themselves wishing Goldfarb had offered more analysis of the events being described. Moreover, the emphasis on students’ perspective is at times underdeveloped. The book would have been improved by using its deep dive into student life to offer students’ perspectives on some of the issues in the existing higher education literature, or even to offer a new perspective on some of the most important events in UBC’s history.

In sum, this is a well-written, attractive book that will appeal to any UBC alumni looking to reminisce about the institution. But it perhaps misses the opportunity to use its source material to make larger arguments about the history of BC and UBC’s place in it.