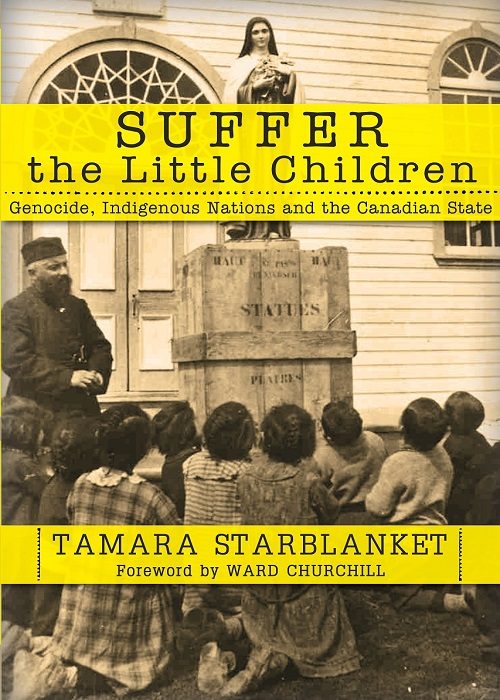 Tamara Starblanket is a Nehiyaw (Cree) legal scholar from Ahthakakoop First Nation and is currently the Dean of Academics at the Native Education College in Vancouver, which is located on the traditional territories of the Musqueam Nation, Squamish Nation, Tsawwassen Nation and the Tsleil-Waututh Nation. Suffer the Little Children: Genocide, Indigenous Nations and the Canadian State is an important addition to the ongoing discussion of genocide in Canada. For decades, many Indigenous peoples have been calling on the Canadian government to recognize residential schools as genocide. However, as stated in Stephen Harper’s 2008 Apology to residential schools Survivors, the Canadian government identifies residential schools as a policy of assimilation. In 2015, the Truth and Reconciliation Commission of Canada (TRC) Final Report concluded that the residential school system was cultural genocide, which is not recognized under international law. Starblanket refutes both the TRC’s and the federal government’s conclusions, arguing that residential schools were genocide.

Starblanket’s book is personal to her. In her introduction she explains that she is “product of this genocidal reality” (22). Her grandparents and parents, as well as their siblings went to residential schools and she is the only member of her birth family alive. She further explains that it is her obligation as a Nehiyaw is to tell the story: “To do so is an honouring, an expression of my love and respect not only for my family, but for the Nehiyaw, and for all Indigenous Peoples, our children, their children and for every coming generation” (23).

Starblanket convincingly argues that Canada committed genocide under the United Nations Convention on the Prevention and Punishment of the Crime of Genocide (UNGC) with the forcible transfer of Indigenous children into residential schools, in which forced indoctrination of western Christian ways caused serious bodily and mental harm and identity destruction. Starblanket draws on the work of Raphael Lemkin, who coined the term genocide and drafted the UNGC, to place her analysis with in his two-step process of genocide: “the destruction of the national pattern of the oppressed group; the other, the imposition of the national pattern of the oppressor” (41). She further contends that intergenerational trauma, including the loss of traditional parenting skills, continues to impact Indigenous people today, and that the genocidal process is still occurring with the continued removal of Indigenous children into the child welfare system.

Starblanket’s book is comprised of four body chapters. In Chapter One, “Naming the Crime: Defining Genocide in International Law,” Starblanket, utilizing testimony from the UNGC Travaux Préparatoir, international and national case law, and drawing on the work of Lemkin,explains that cultural genocide, despite protests from other countries, was removed as a form of genocide from the UNGC during the drafting process. Starblanket argues that Canada supported this removal because it is a settler colonial state and that the inclusion of cultural genocide, as Lemkin intended, would implicate the country in genocidal acts.

In Chapter Three, “Coming to Grips with Canada as a Colonizing State: The Creator Knows Their Lies and So Must We,” Starblanket, drawing on the cognitive legal theory of Steven Newcomb,evokes the metaphor of a brainwashing machine to further demonstrate how the residential school system dominated and dehumanized Indigenous children as part of colonialism and the genocidal process (196). Canada used doctrines of racial superiority, colonial legal frameworks, and policy to isolate and destroy Indigenous children through demonization, dehumanization, and forced indoctrination of the western perspective.

In Chapter Four, “Smoke and Mirrors: Canada’s Pretense of Compliance with the Genocide Convention,” Starblanket argues that Canada violated the Vienna Convention by adopting a limited definition of genocide in its Criminal Code, which she effectively concludes was on purpose for Canada to evade guilt and culpability in genocide (222). In addition, Starblanket points out that after the ratification of the UNGC in 1948 Canada continued to engage in genocidal acts with the forcible transfers of Indigenous child to residential schools and the child welfare system, and, as Ian Mosby uncovered in 2013, nutritional experiments on Indigenous people were conducted.

In her conclusion, Starblanket argues that Canada should be held accountable for its crimes of genocide and that the country needs to cease genocidal practices immediately. She sees self-determination as the way forward for Indigenous people: “The road home entails the right of self-determination as subjects in international law, which is a fundamental aspect of healing and recovering our way of life. In fact, it is the only solution for peace and for true justice” (280).

The book, although based on her Master of Laws thesis, is accessible to other disciplines. However, given the technical nature of the legal analysis, without a prior knowledge of the UNGC some readers may feel out of their depth. Starblanket relies heavily on block quotes throughout her book, which some might see as a drawback. However, the approach allows readers to reflect on the source material as it was provided. Despite these minor criticisms, Starblanket’s book is an important, thought-provoking, and timely interdisciplinary contribution to the field of law, history, and Indigenous Studies that will push readers to reconceptualize colonization and the characterization of residential schools as genocidal.