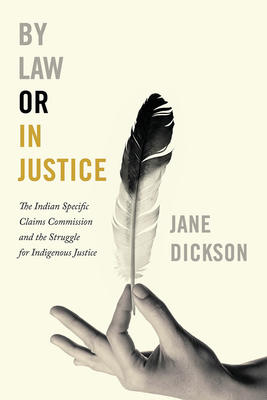 The foundation of Professor Jane Dickson’s book, By Law Or in Justice, is her work as a Commissioner for the Indian Specific Claims Commission, from 2002 to 2009. The Commission itself endured from 1991 to 2009, with the mandate to conduct inquires into numerous Indigenous grievances with respect to treaties, land settlements, and fiduciary obligations held by the Crown to look out for the best interests of Indigenous peoples.

The Commission itself could not make orders binding on the Crown, but could make factual conclusions based on its inquiries, and at least try to bring parties together into negotiated resolutions. Add in that the Commission itself was a creation of the federal government in Ottawa, and there is an obvious problem. Those two realities together already scream conflict of interest from the very start, but the problems hardly end there.

Dickson details numerous tactics employed by the Crown, including spurious delays designed to wear down the Indigenous participants (contrary to the ostensible policy being a timely resolution of claims), conveniently spinning legal arguments to the present benefit of the Crown where previously the prerequisites for the arguments were brought about by previous Crown misconduct, and Crown lawyers purporting to dictate to the Commissioners what the outcome was to be.

Dickson also weighs into other illuminating facets of the Commission’s work. For example, she relates how legal standards and protocol, although centered around procedural fairness and propriety, can sometimes amount to real encumbrances in very ironic ways. One example was when she made direct contact with a hired researcher in an effort to ascertain the answer to a question that had been on her mind. The end result was a great deal of hand wringing and stress as the proper protocol was to present the question to legal counsel for the Commission, who in turn would set the researcher to the task. And yet certainly the more direct approach seemed more practical and expeditious by comparison. Another example was Indigenous persons, Elders in particular, being treated with kid gloves as though they needed to be protected from the harshness of cross-examination in adversarial justice systems. Dickson felt that very often those Indigenous participants wanted more than anything an opportunity to tell their stories, even if accompanied by cross-examination.

Dickson ends the book with some final reflections on the Commission itself as it wound down, and on the relatively new Specific Claims Tribunal Act. She notes that the latter does not appear to have amounted to an improvement in practice, but holds out some hope that the Crown can reverse course and begin acting in a manner truly fitting the honour of the Crown and its fiduciary obligations with respect to Indigenous peoples.

The book is an excellent read, although I do have a few minor points of concern. One is that I would have appreciated some consideration of Indigenous rights litigation, particular with respect to treaty rights, as an alternative. The two selling points for going the litigation route is that a court can make decisions binding on the Crown, and the judiciary at least in theory is supposed to be impartial between the Crown and the Indigenous litigants, thereby removing the conflict of interest problem. At the same time, litigation itself requires enormous time and monetary resources. That in itself has been a driving force behind initiatives like the Commission, which was meant to provide a less expensive and more expeditious route for addressing the claims. Comparing and contrasting the two pathways would have given the reader a greater appreciation for the legal landscape, and how the Commission fitted into it.

Another minor issue is the aforementioned point about treating Indigenous witnesses with kid gloves. Dickson almost assumes that Indigenous witnesses are simply willing to shrug off the adversities of the system and are eager to tell their stories. Issues of cultural faux pas and the lack of legitimacy of adversarial systems for Indigenous peoples is a real issue, and the concerns can be felt acutely when it comes to Indigenous Elders. The topic has received treatment in other literature, particularly with reference to American tribal courts, and from well-known scholars such as John Borrows. I am not saying that Dickson is wrong in her assessment of what she observed firsthand, but a more complete treatment of a quite sensitive issue would have been appreciated.

Another concern is that, despite the best efforts to reach a layperson audience, I am not entirely convinced that it will succeed. Although, the author probably should not be faulted for that. The complexity of the field and its knowledge base make the use of jargon and specialist language unavoidable. I can nonetheless recommend it as a solid read for anyone interested in learning more about this particularly pressing subject matter.

By Law or In Justice: The Indian Specific Claims Commission and the Struggle for Indigenous Justice. Vancouver: UBC Press, 2018. 240 pp. $32.95, paperback.