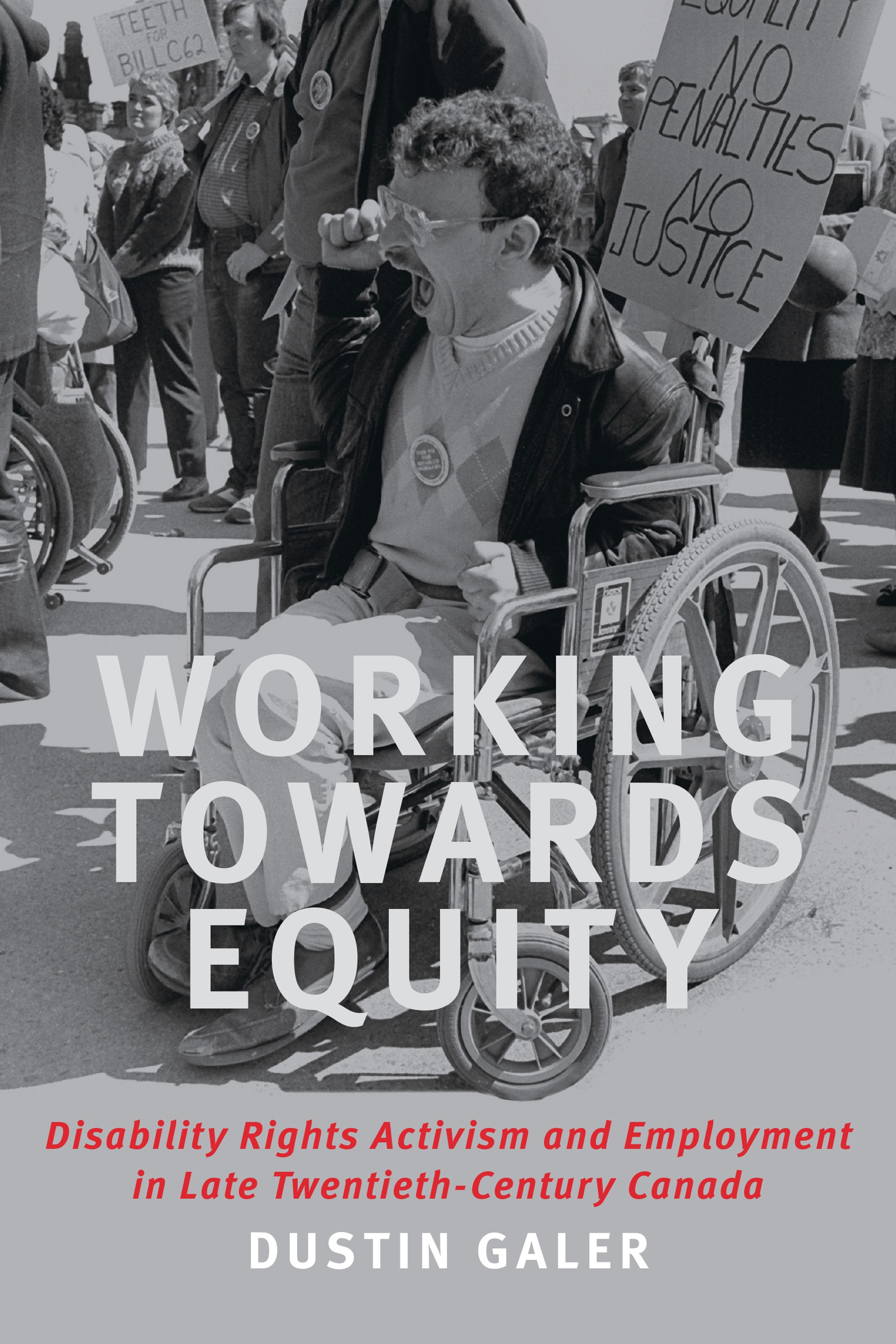 Working Towards Equity examines the intersection of the contested nature of disability movements and activism and decision maker actions related to labour market activity in late 20thcentury Canada.

Galer’s argument is that advances in labour market activity for disabled people was not the result of a series of progressive developments but rather due to a series of repeated waves of public and political awareness. In this process, an uncalibrated cacophony of disability voices interacted to construct and reconstruct efforts aimed at needed changes.

Three voices loom large in this ensemble: families and family advocates, the rehabilitation-industrial complex and disability activists. The central role of families and family advocates in the deinstitutionalization movement and the development of the voluntary sector is explored, illustrating the emerging (and new) discourse surrounding disability and work (ch. 2). This is largely at odds with the almost complete control the rehabilitation-industrial complex, deeply rooted in the medical model of disability, had over the sector and which was more concerned with maintaining its authority (ch. 3). As Galer details, disability activists challenged these approaches arguing for disability organizations to be led by disabled people and for independent living (ch. 4).

The interactions of these three often conflicting voices are traced through the role and evolution of sheltered workshops (ch. 5), the role played by employers in the economic integration of disabled people (ch. 6), and in the evolution and impact of disability rights on the structure and policies of the Canadian state, including the influence of political ideologies (ch. 7). Readers will find it both informative and shocking to learn about the efforts taken to build cooperative and collaborative working relationships among various state and non-state actors in the 1960s, 1970s and early-1980s only to have them disintegrate at the hands of the adoption of the neoliberal state by various governments, especially the Ontario Mike Harris Progressive Conservatives in the 1990s. The tenuous relationship between disability activism and the labour movement, highlighting how disability activism posed challenges for unions, bookends this volume (ch. 8).

The strength of Working Towards Equity is the rich narrative the author weaves. Detail surrounding the intricacies and complex relationships among the various disability voices is provided, ensuring that this volume will be well cited for years to come. Even better is the fact that the volume is grounded in the employment experiences of thirty disabled people over a period of forty years. It is the first chapter that draws the reader in to learn how these individuals characterized employment as a central element of their identities. To Galer’s credit, these experiences are further integrated into the various chapters to tease out meaning (with more information on these individuals provided in an appendix). Readers will also enjoy how Galer integrates various films and television shows into the narrative, such as The Disability Myth, Hurry Tomorrow, The Littlest Hobo, and the Best Years of Our Lives.

While there is much to like about Working Towards Equity, this reviewer is not convinced that the fragmented and contested nature of disability voices necessarily held progress back. Rather, disability crosscuts other movements (e.g., women’s movement, environmental) and, as such, time was required to build a base from which to act. Moving forward, the diversity of the disability movement and activism may be its greatest strength. This is an important consideration as British Columbia moves closer to the enactment of provincial accessibility legislation. For example, to what extent has this intersectionality influenced the province’s disability movement throughout this process?

Questions also surround Galer’s lament that the newer disabled generation has not picked up on disability activism as older disabled generations have phased out. Until newer disabled generations situate and find fault with their starting points, define their identities and whether or not they wish to engage in activism, they may remain content with progress made to date. Fault is also hard to find with families and family advocates who did not fully engage for a newer model of disability given their central role in the deinstitutionalization movement. No doubt many were simply tired and decided to leave that fight for others rather than continue to push for more changes. Still, newer generations may simply engage differently. Certainly, the election of Stephanie Cadieux, Sam Sullivan and Michelle Stilwell to provincial office (BC) suggest as much. So does the election of BC’s Carla Qualtrough, who has become a powerful minister in Justin Trudeau’s cabinet.

Working Towards Equity is an excellent volume and a welcome addition to the disability literature. It is a must read for its fresh perspective, especially for those interested in the disability movement and activism side of the employment equation.