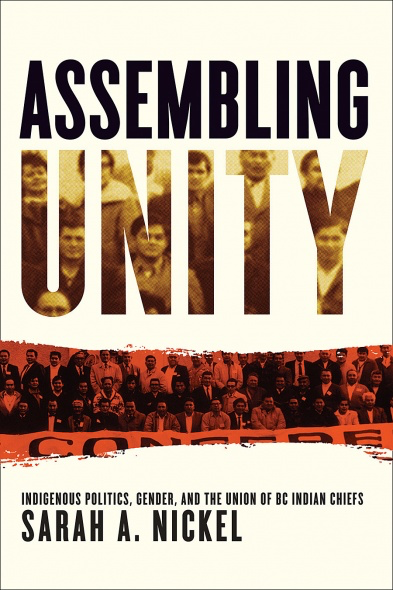 By Sarah A. Nickel

Sarah Nickel’s Assembling Unity: Indigenous Politics, Gender and the Union of BC Indian Chiefs is a significant contribution, not only to the history of Indigenous affairs in British Columbia, but to Indigenous history as a field overall. Focusing on a period of increased and widespread pan-Indigenous organizing between the 1960s and early-1980s, Nickel explores the history of the Union of BC Indian Chiefs (UBCIC), Indigenous women’s groups like the British Columbia Indian Homemakers’ Association (BCIHA) and the British Columbia Native Women’s Society (BCNWS), as well as other grassroots organizations and movements, to interrogate how the concept of unity was mobilized to achieve political goals for Indigenous nations in the province. Nickel’s analysis rests on a foundation of interviews with former members of these organizations, primary sources drawn in large numbers from the UBCIC archives, and Indigenous theoretical frameworks– specifically Glen Coulthard’s theory of recognition (Red Skin, White Masks: Rejecting the Colonial Politics of Recognition, 2014), Audra Simpson’s theory of refusal (Mohawk Interruptus: Political Life Across The Borders of Settler States, 2014), and more broadly, what Nickel calls “new Indigenous feminisms.” (11)  In particular, the Indigenous feminist approach allows her to take a decolonial and intersectional approach to analyzing the actions of the UBCIC and related organizations. Working with these frameworks as a base, and prioritizing Indigenous understandings of the past, she argues that achieving a kind of unity among British Columbia Indigenous nations in order to have their voices heard in settler colonial spaces, was a complex and often “fraught” (15) process of negotiation between Indigenous groups with unique needs and interests.

Nickel’s analysis is particularly important because it challenges the ways studies of Indigenous political organizing have traditionally been done in Canada. As Nickel explains, there have been community-based studies focused on specific nations’ and bands’ political strategies in individual battles against the Canadian settler state, such as The Same as Yesterday: The Lillooet Tribal People Chronicle the Takeover of their Territory by Joanne Drake-Terry (1989), but works such as these have not connected more local histories to national and even international trends that would have been influential at the time, like Nickel works to do in Assembling Unity. Conversely, works that focus specifically on pan-Indigenous movements and their relationship with the Canadian state like Laurie Meijer Drees’ The Indian Association of Alberta: A History of Political Action(2002), have neglected to capture the unique needs and identities of the nations that make up the organizations under study. Nickel’s focus on multi-faceted Indigenous organizing in BC specifically provides a great vantage point from which to connect provincial Indigenous politics to broader trends and movements like Red Power, as well as to highlight the complexities and internal debates that occurred as very diverse groups of Indigenous people worked together.

This study of the desire of the UBCIC to achieve unity as a tool to combat settler colonialism and assert Aboriginal rights tackles the “messiness” of Indigenous politics head-on, and does not try to smooth out the dissentions and disagreements within and between the UBCIC and other BC Indigenous organizations. Nickel argues that this challenges a “double standard” (169) applied to Indigenous politics, an assumption that imperfect alliances mean that Indigenous people are not able to participate in politics to the same calibre as settler-Canadians. In this book, Indigenous people are afforded the privilege of having their complex political structures and organizations recognized—this reflects a reality few works on late twentieth century Indigenous politics have portrayed thus far.

In another large departure from previously published studies on Indigenous organizing in Canada, Nickel studies the concerns and actions of the BCIHA and the BCNWS in the same context in which she studies the more male-dominated UBCIC. In doing so, Nickel is able to critically interrogate the heteropatriarchial, colonial structures imposed upon and in some cases, replicated by, some First Nations political organizations during this era. Nickel also uses this tactic to demonstrate the significant role these Indigenous women’s organizations played in negotiating how the UBCIC would represent First Nations within British Columbia. This, as Nickel so aptly describes, challenges the traditional “decontextualization” (11) of Indigenous women’s political organizing by acknowledging how much influence their work had on pan-Indigenous politics more broadly. Overall, Nickel’s work pushes studies of Indigenous politics in new and exciting directions, and importantly, provides an easily accessible historical narrative that challenges deep-seated colonial conceptions of what Indigenous politics looks like.