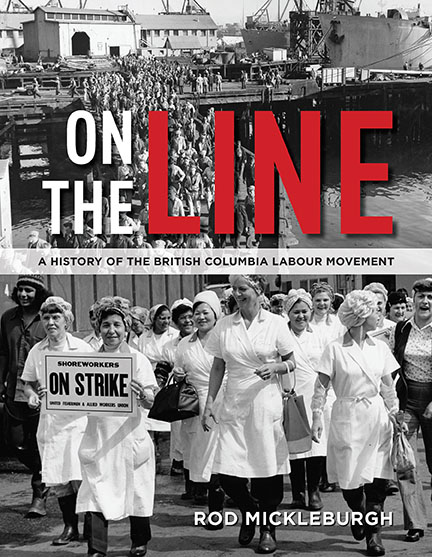 On The Line is an account of BC trade unions by the BC Labour Heritage Centre (an offshoot of the BC Federation of Labour) written by retired Vancouver Sun labour reporter Rod Mickleburgh. In a well-illustrated and lively manner, he tells the story of workers’ organizations and struggles, from Vancouver Island coal miners in the 1850s to teachers’ struggles today.

The author tells three stories in twenty four chapters: settler/aboriginal relations in the labour market; the rise of craft and industrial unions in the private sector – often divided by anti-Asian racism and the politics of reform or revolution; and the ascendency of public sector unionism since the 1970s, raising gender equity as more women entered unions.

Mickleburgh begins with John Lutz’s research on the inclusion of native workers at the beginning of European settlement in BC’s major resource industries and their exclusion with mass European settlement. Exclusion also characterizes Asian migrants, for Chinese, Japanese and South Asian resource workers. Only political groups like the IWW and the Communist Party’s Worker’s Unity League challenged this, though Canada removed these barriers after World War Two.

What strikes the reader immediately is how violent labour relations were as unions were established – as chapters on the Great Vancouver Island Coal Strike in 1912 or Ballantyne Pier in the 1930s illustrate – and continued court repression with ex parte injunctions (with jail sentences for union members) until the 1970s when the NDP government established the Labour Code and Board.

Legalization of unions, compulsory dues collection, collective bargaining, and labour standards have usually been established elsewhere in Canada and then reluctantly acknowledged in the province. This speaks volumes about the small business nature of provincial politics in dealing with dominant resource corporations.

What also stands out is how important socialist politics were to worker self organization. From the SPBC to the IWW to the Communist Party, to new leftists in the independent Canadian union movement of the 1970s, socialist militants risked serious, sometimes deadly, reprisals to establish unions and bargain contracts. Later, international unions and social democrats purged or expelled leftists as threats to union and state stability. But that hasn’t meant comfortable relations with NDP administrations in legally containing workplace conflict, with essential services and Social Accords that offered equity without investment (i.e., wage controls).

Another theme is how unionization of public sector workers clashed with Social Credit and Liberal governments’ commitment to the market through legislation that tried to de-unionize GEU and the BCTF and unilaterally altered agreements. In1983 Bill Bennett tried to end job security and destroy the social safety net in a package of 26 ‘restraint’ bills, then Gordon Campbell stripped job security and working conditions from health workers and teachers’ contracts in the early 2000s.

Ultimately, by 2016 the Supreme Court of Canada ruled union rights were protected rights under the Charter of Rights and Freedoms. Despite the decline of union density in the province, as Mickleburgh states, unions remain critical to the well being and rights of the waged majority.

In narrative terms, some gaps exist. Craft unions, other than the building trades under siege since the 1980s; the 1994 NDP Korbin report establishing sectoral bargaining to extinguish local certifications; and the general decline of private sector unions, are largely missing. And there could be better context with a few tables outlining the scale and composition of the workforce, union density, and strike patterns.

More importantly, when the author describes new pressures and tactics, the politics need to be discussed. In particular, why has the general strike arisen as an economic response to government interventions – from the 1965 BCFed mobilization for oil refinery workers, to Operation Solidarity, to the looming showdown with the Liberals in 2005 over contract stripping? How do unions develop fixed interests over time that lead to rank and file rebellions, up to and including independent movements like SORWUC for women bank workers in the 1970s, which the established trade union movement refused to support? What about the often-difficult relations between unions and movements like the Solidarity Coalition and the Environmental movement in 1993’s War in the Woods over Clayoquot Sound?

On The Line is a good introduction to BC organized workers’ struggles, but more needs to be debated. As a college faculty association President in 2005 and chair of the provincial college bargaining committee, I can assure the reader that such debates happened.