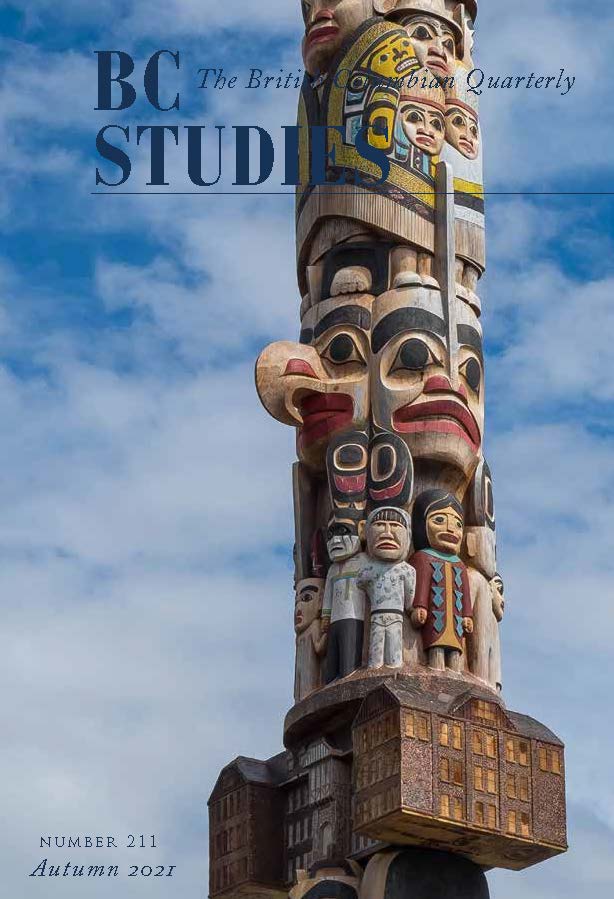 Or order a print copy today!

BC’s Five Years of Drug Failure, Visualized: The anniversary of the province’s overdose emergency declaration is nothing to celebrate

The drug war must end: The right to life, liberty and security of the person during the COVID-19 pandemic for people who use drugs

In Search for the Lost Chinese Canadian Story: A Review and Research Note for The Diary of Dukesang Wong

“Pioneering” Women: Tales of Female Settler Colonialism in BC

Cree and Métis director Loretta Todd’s Monkey Beach is a long-awaited adaptation of Haisla and Heitsulk writer Eden Robinson’s classic novel of the same name. And, in many ways, the film doesn’t disappoint. In Todd’s...

Celebrating the Indigenous-Filipino Community on Bainbridge Island and the Indigenous Women Who Brought it into Being: A Review of Honor Thy Mother

Altering the Landscape of Our Memories: A Review of Indigenous Cities (Vancouver)

I came to x̌ʷay̓x̌ʷəy̓ as a child, not knowing her name, but knowing she had the strength to hold out sharp city noises and the tenderness to hold onto the shy wood duck. To me,...

Sounds Japanese Canadian to Me

Sounds Japanese Canadian to Me is a monthly podcast on Japanese Canadian history and culture. Produced and hosted by Raymond Nakamura and staff of the Nikkei National Museum, the episodes are structured as a casual...

On the Cusp of Contact: Gender, Space and Race in the Colonization of British Columbia

Is it possible for two entirely different legal frameworks, built by ontologically diverse and frequently disparate parties, to coexist under one judicial system? This question would be difficult enough when considering two parties on equal...

The Theatre of Regret: Literature, Art, and the Politics of Reconciliation in Canada

In The Theatre of Regret: Literature, Art and the Politics of Reconciliation in Canada, David Gaertner, an academic author and settler-scholar, centres Indigenous literary and artistic works to contribute to critiques of reconciliation. The book is a...

Against the Current and Into the Light: Performing History and Land in Coast Salish Territories and Vancouver’s Stanley Park

Coast Salish Indigenous people never ceded their lands and resources to settlers and have always asserted their sovereignty. Over time, those assertions have taken various forms: petitions, protests, litigation. There have also been cultural assertions...

Searching for Pitt Lake Gold: Facts and Fantasy in the Legend of Slumach

Searching for Pitt Lake Gold: Facts and Fantasy in the Legend of Slumach, from local historian Fred Braches, deconstructs the myth of Slumach’s lost gold mine. Perpetuated by a handful of “creative” journalists and seized...

The early history of British Columbia is replete with enigmatic and unusual figures but few rival the man popularly known as Cataline. Anyone who has spent time exploring the history of the province will have...

Fishes of the Salish Sea

Having studied fish for more than 40 years, I have accumulated more than 50 “fishes of…” books, latitudinally arranged on my office shelf, and none of them can compare in the quality, quantity, and aesthetics...

BC Studies no. 211 Autumn 2021 | Bibliography of British Columbia

Zhongping Chen is professor of Chinese history at the University of Victoria. He has research interests in environmental and socioeconomic history of China during the Little Ice Age (1400–1900), sociopolitical history of late Qing and early Republican China, and the history of the global Chinese diaspora. His publications include dozens of journal articles and four books in Chinese and English, one of which is the monograph Modern China’s Network Revolution: Chambers of Commerce and Sociopolitical Change in the Early Twentieth Century (Stanford, CA: Stanford University Press, 2011). In addition to a forthcoming book, “From Reform to Revolution in the Transpacific Chinese Diaspora, 1898–1918,” he is working on a new book project, “The Rise and Reform of the Transpacific Chinese Diaspora, 1788–1898.” He has also started a five-year research project (2021–2026), “Human-Environment Interactions and Rural China’s Transition during the Little Ice Age, 1400–1900,” which is funded by the Social Sciences and Humanities Research Council of Canada.

Erin A. Hogg is a recent doctoral graduate from the department of archaeology at Simon Fraser University. Her doctoral dissertation examines the role of archaeological data as evidence in Aboriginal rights and title litigation in Canada.

Robert G. McCandless practised as a professional geoscientist until retirement in 2009, after twenty-eight years with Environment Canada in Whitehorse, Ottawa, and Vancouver. Previously he worked in oil and gas exploration and mining. While living in Yukon, he wrote Yukon Wildlife: A Social History (University of Alberta Press, 1985). With government he worked on pollution prevention in the mining sector, and also advised on Aboriginal affairs, including treaty negotiations. After retirement he published on natural resource and history topics, including BC offshore petroleum exploration (BC Studies no. 178, Summer 2013); and Britannia Mine pollution (BC Studies no. 188, Winter 2015/16). He lives in Delta, BC.

Bruce McIvor is a partner at First Peoples Law LLP. His work includes both litigation and negotiation on behalf of Indigenous Peoples. Bruce is recognized nationally and internationally as a leading practitioner of Aboriginal law in Canada. His collection of essays entitled Standoff: Why Reconciliation Fails Indigenous People and How to Fix It will be published in the fall of 2021 by Harbour Publishing. Bruce is a member of the Manitoba Métis Federation.

John R. Welch is a professor, jointly appointed in the Department of Archaeology and the School of Resource and Environmental Man-agement at Simon Fraser University. Welch also serves as an expert witness and directs Archaeology Southwest’s Landscape and Site Pro-tection Program. Welch maintains career commitments to collaborations with Indigenous nations on projects at the interface of Indigenous sov-ereignty – rights and responsibilities derived from authority over people and territory – and stewardship – sustainable and broadly beneficial uses of sociocultural and biophysical inheritances. John Welch is a founding member of the board for the Fort Apache Heritage Foundation. He publishes primarily on Apache history and applied archaeology.

Nicole Yakashiro is a PhD student in the Department of History at the University of British Columbia. Her research explores how non-Indigenous people of colour have been situated within the property and labour structures of settler colonialism in Canada during the twentieth century.