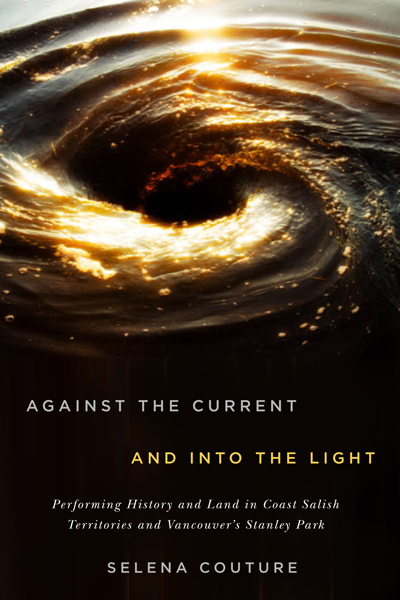 Against the Current and Into the Light: Performing History and Land in Coast Salish Territories and Vancouver’s Stanley Park

Coast Salish Indigenous people never ceded their lands and resources to settlers and have always asserted their sovereignty. Over time, those assertions have taken various forms: petitions, protests, litigation. There have also been cultural assertions of sovereignty, particularly the use of performance and dance. Between 1884 and 1951, the Canadian government outlawed the potlatch and other Indigenous ceremonies as part of its assimilationist Indian Act policy, an effort to eradicate Indigenous cultures. Despite the legal prohibition, dance, ceremony, and performance continued to be powerful tools of resistance to colonialism and expressions of sovereignty among Coast Salish nations. As Selena Couture shows in her new book, “the fact that performances were banned whereas visual arts were encouraged is an indication that performance had the power to unsettle colonialist operations” (144). This book draws attention to the historical significance of performance in Indigenous resistance to colonialism in British Columbia.

Against the Current and Into the Light is organized into four main chapters. The first lays out the conceptual frameworks that Couture uses to analyze Indigenous performance and its connections to land and place through language. The remaining chapters examine historical case studies of Indigenous and settler performances. Chapter 2 critically reassesses the dedication of Stanley Park and the re-enactment event held in 1943 as acts of creating white setter space in Vancouver. The third chapter focuses on the city’s Diamond Jubilee celebrations in 1946, including The Diamond Jubilee Show near χʷay̓χʷәy̓ in Stanley Park and The Indian and Village Show across English Bay at sәn̓ aʔqʷ/Sen’ákw (now Vanier Park). The final chapter considers a more recent example of Indigenous performance in Stanley Park at the short-lived Klahowya Village, an Indigenous cultural tourism site which operated at the former Children’s Farmyard and miniature train from 2010 to 2014.

Between each of the main chapters, Couture deviates from the historical analysis to examine early twenty-first century theatrical performances written by or performed by Indigenous women. This, she argues, is intended to link the past and the present “to avoid the still common colonial view of Indigenous peoples as being of the past and seek to rectify the absence of Indigenous women from the archival record” (11). The performances analyzed in these interventions include Quelemia Sparrow’s podplay Ashes on the Water (2011), Western Canada Theatre’s 2014 production of Michel Tremblay’s For the Pleasure of Seeing Her Again (1998), Marie Clements’s production of The Road Forward (2014), and Inuit throat singer Tanya Tagaq’s performance at the 2014 PuSh Festival.

This book successfully brings together theatre scholarship with historical analysis of Indigenous and settler performance, raising exciting possibilities for thinking about performance as a form of Indigenous historiography. This interdisciplinary approach adds much to our understanding of the ways in which Coast Salish people adapted performance to the changing contexts of settler-colonialism and the persistence of Indigenous sovereignty. Using Stanley Park and adjacent areas in Vancouver as sites of study, Couture shows examples of continued Coast Salish occupation of the land and assertion of Indigenous sovereignty expressed through performance in the twentieth and twenty-first centuries. The chronology is, unfortunately, limited to case studies from the 1940s and one example from the recent past. Broadening the geographic scope of the study might have yielded more chronological depth and evidence of the use of performance as an expression of sovereignty beyond Stanley Park and its nearby areas in Vancouver. Certainly casting a view to Vancouver’s suburbs on the North Shore, along the Fraser River, and into the Fraser River Valley might have shed light on what was likely a wider phenomenon. Still, this book offers a useful model for future research that integrates theatre scholarship with historical analysis.

Couture attempts to decolonize the archive in this study by deconstructing the creation of the Vancouver Archives by the founding city archivist, James Skitt Matthews. She makes a good case for rethinking how archives are created in the context of settler colonialism and the historical construction of whiteness. No doubt city leaders in Vancouver constructed Stanley Park as a white space, as Jean Barman and Renisa Mawani have previously argued. Couture’s examination of the dedication of Stanley Park and the re-enactment of this event in 1943 adds to these previous studies, reveals the apocryphal nature of the dedication, and ties it to broader efforts to construct white settler identity through commemorative acts and monuments.

While there are elements of Matthews’s work in Indigenous history that are problematic forms of salvage anthropology, his oral histories with early settlers and Indigenous people remain indispensable, if flawed, sources of knowledge of both precolonial and early settler-colonial histories of the Lower Mainland. They capture stories that are vital to understanding histories of dispossession that are the foundations upon which a settler-colonial society was established in BC’S Lower Mainland. They also provide knowledge and voices of Indigenous people in this history, however mediated through Matthews. Historians must, as Couture shows, be mindful of the context in which Matthews and his interviewees created such sources to understand their limits.

Where this book excels in applying novel interdisciplinary approaches to the study of historical performance, its structure can feel disjointed, particularly for readers mainly concerned with historical analysis. The interventions that move readers from past to present can be abrupt. The effort to bring past and present into conversation isn’t always successful as the selected contemporary performances are somewhat remotely connected to Coast Salish histories and instead take a pan-Indigenous perspective. What’s lost, it seems, is the specificity of the Coast Salish experience examined in the historical case studies of the main chapters.

Nevertheless, Against the Current and Into the Light has much to offer readers with interests in both historical scholarship and theatre/performance studies. The second chapter examining Matthews and the construction of the city archives alone is provocative and worth consideration for any historians who work in the collections that Matthews arranged so many years ago. The book also is an invitation for closer examination of Indigenous performance histories in other places and across time in Canada.