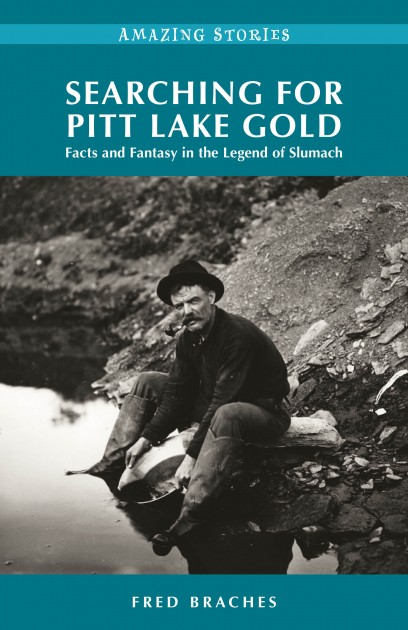 Searching for Pitt Lake Gold: Facts and Fantasy in the Legend of Slumach

Searching for Pitt Lake Gold: Facts and Fantasy in the Legend of Slumach, from local historian Fred Braches, deconstructs the myth of Slumach’s lost gold mine. Perpetuated by a handful of “creative” journalists and seized upon by scores of hopeful prospectors, the tale runs something like this: from as early as 1858, rumors of a rich placer deposit lured prospectors to Pitt Lake, though few hopefuls ever found it. A Katzie man named Slumach (sometimes spelled Slum.ook) was said to be the sole possessor of knowledge about the mineral-rich mine, but this knowledge went with him to the grave when he was tried and executed in 1891 after a deadly altercation with Louie Bee. In the years following his death, journalists transformed Slumach’s legacy, framing the elderly man as a young, hard-drinking serial murderer, epitomized by the creation of an alter ego that Braches calls Slumach’s “evil-twin,” “Slummock.” In time, the legend came to fixate on how Slumach’s ghost stood watch over the mine, condemning settlers greedy enough to seek it out, a myth in some ways bolstered by a series of failed attempts to find Pitt Lake’s gold.

As it turns out this legend, which has entranced prospectors and locals since it first gained currency in the press in 1915, has very little, if any, basis in the extant archival documents, but Braches traces the lives of those men who believed the stories. He has done well not only to recount their narratives but also to set the rumors against the realities, revealing the rift between what actually happened and what has been passed down. The idea that historians should disentangle the facts and fictions underpinning such legends is a central claim of the book. The first myth that Braches deconstructs is that surrounding Slumach himself. Surveying the documents associated with Slumach’s trial, Braches argues that the association of Slumach with gold came into being only well after his death, as virtually no evidence produced during his lifetime corroborates the claim that Slumach possessed special knowledge of the mine. He demonstrates how journalists and pulp writers distorted Slumach’s image in order to sell a sizzling story, before analyzing in successive chapters the principal figures who devoted their lives to finding gold at Pitt Lake, many of whom died or disappeared in the process. These ranged from Robert Allan Brown – known variously as “Doc” or “Volcanic” Brown — in the 1930s and Stu Brown in the 1970s to a failed expedition in the 1990s.

The book raises questions about what scholars are to do with such fine-grained, popular historical analyses. Without question, Braches has produced a well-researched and engaging book, but the granular level of detail so familiar to the local historian eschews any explicit analysis of how, in this case, journalistic flourishes came to take on a life of their own, often serving to perpetuate and reinforce stereotypes about Indigenous peoples. Braches has debunked the myth of the mine in a narrow sense, but his passion project has left in place another: the idea that gold rush stories can be understood without reference to broader structural change in British Columbia’s colonial history. The book will be of interest to those with a stake in the region’s history, though its limited scope makes it difficult to foresee a wider readership, a point which Braches, with good humour, points out in the acknowledgments. These criticisms aside, the narrowness of Braches’s book is heartening in some ways, for it is a reminder that it is often the small, local stories – both fact and fiction – that provide the texture of British Columbia’s history.