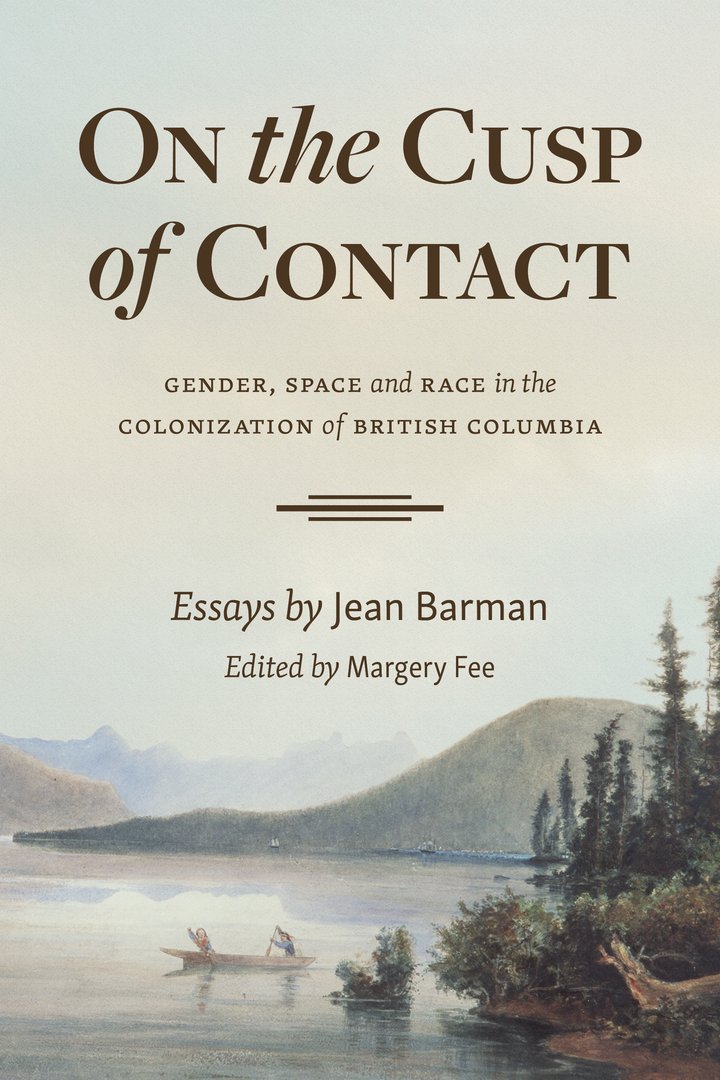 On the Cusp of Contact: Gender, Space and Race in the Colonization of British Columbia

No other historian has been able to capture the unique history and diversity of British Columbia as University of British Columbia professor emeritus Jean Barman, whose brilliant career is encapsulated in a select collection of essays entitled On the Cusp of Contact: Gender, Space and Race in the Colonization of British Columbia. Years before institutionalized redress, scholars such as Barman were delving into the untold stories of the colonization of her adopted home (since 1971) of BC. Her feminist and outsider perspective allowed her to move beyond the dominant and reiterated British and Canadian tropes of our history to reveal the multiple narratives of a colonial society where Indigenous people were forced to negotiate new social and economic realities, first within the British colonial administrations and then, following 1871, the Canadian state.

The sixteen essays, written between 1995 and 2014, capture the essence of Barman’s historical method, which is to consider the past on its own terms as opposed to what we might like, or think, it to be. Such a task requires attention to multiple sources and methods of analysis. Barman, who describes herself primarily as an archivist and librarian, not only plumbs obscure historical accounts and statistical records, but seeks out the descendants of historical figures to fill in the many gaps of our received history. She makes sense of people’s actions based, not on the written opinions of European males, but on the historical and social contexts in which they operated. Editor Margay Fee, who provides an excellent introduction and welcome overview of Barman’s work, notes Barman’s ability to cross the boundaries between history, life writing, sociology and, I would add, anthropology. This is particularly evident in her ethnographic collaboration with descendant communities and in her exploration of the interplay between individual agency and social structure which, as Fee observes, “is unusual for many historians” (xix).

As Barman observes in the preface, she was privileged to teach in the Department of Education where she was free of disciplinary restraints to see BC for what it was, or rather for what was missing in its story.  Barman’s 1991 breakthrough publication, The West Beyond the West, finally replaced Margaret Ormbsy’s thoroughly Eurocentric 1958 history of BC with a more inclusive history that more people could recognize as their place in the world.

The book is divided into four thematic parts that reflect the chronology and impact of colonization in BC. “Making White Space” compares the erasure of two Indigenous villages in British Columbia’s two major cities, Vancouver and Victoria, highlighting the similarities and differences peculiar to time and place.  “Indigenous Women” showcases Barman’s pioneering essays documenting 19th century Indigenous female agency in the face of colonization, racism and sexism. The narrative of the first white settler in the Okanagan and elsewhere is turned on its head in “Finding solace in Families,” which explores the lives and mixed-race communities in Fort Langley and on the Gulf Islands and documents the little-known unions of Chinese miners and Indigenous women throughout the province. The last section “Navigating Schooling” is very pertinent, enlightening and shocking, not in the sense of horror at the physical and sexual abuse, but the institutional neglect, the “federal parsimony and white prejudice,” that competed with and eliminated a local ideology of common schooling.

On the Cusp of Contact is particularly appropriate in this day of Truth and Reconciliation when there is so little understanding of the past in its complexity. According to the old adage, such neglect forces us to repeat our ignorance with each generation. Fortunately, with scholars such as Jean Barman as our guide, with knowledge of the past in front of us, we can better negotiate the uncertain future.

Barman, Jean. On the Cusp of Contact: Gender, Space and Race in the Colonization of British Columbia, edited by Margery Fee. Madeira Park, BC: Harbour Publishing, 2020. 496 pp. $34.95 paper.