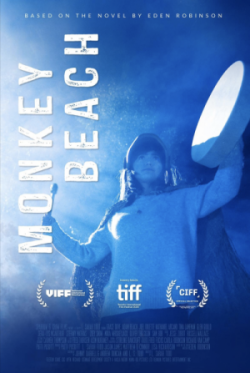 Cree and Métis director Loretta Todd’s Monkey Beach is a long-awaited adaptation of Haisla and Heitsulk writer Eden Robinson’s classic novel of the same name. And, in many ways, the film doesn’t disappoint. In Todd’s capable hands, Robinson’s novel is realized on the screen with both dedication to the sense and scope of the reference text while also imagining some of its own possibilities. Perhaps most notable in the first place is how well the film treats the setting of Kitamaat not as a canvas upon which the action happens but as a character itself. Viewers used to a more upbeat pace might find the long shots of the land and water to be boring but what they do for the film is important. At the outset, they establish Kitamaat as one of the characters with whom the main character, Lisa, has to navigate a shifting relationship. Having just moved back from Vancouver, Lisa’s relationship to place is complex and reflects bigger questions about the role of movements between urban and village spaces for young Indigenous people. Todd’s integration of the British Columbian coast ensures that its role is not only as a visual fabric, but is also an integral and dynamic part of Lisa’s navigation of the various worlds in which she lives.

And this navigation, much like in the novel, is what grounds the core themes of the film. Though often characterized as a navigation “between two worlds,” Todd follows Robinson in creating a more nuanced exploration of the relationships between the various worlds that live alongside, within, and between each other. Lisa’s relationship to the spirit world is connected in various ways to her relationships with others throughout the film, including her mother, brother, uncle, best friend, and grandmother—all of whom have differing relationships to that world themselves as well. There are times when the visual representation of this world pulls the viewer away from the overall feel of the film a bit, but overall Todd’s attempt to both integrate and differentiate between the different worlds at play works for the viewer, even those who might not be familiar with the source material. The same is true for the themes that Todd expertly draws out of belonging to place and community, the generational impact of both structural and interpersonal violence, and the myriad ways that the land and water inform peoples’ relationships to each other.

The only substantial shift that might be confusing to viewers who are familiar with and invested in the world that Robinson created in her novel is the pacing itself. Whereas the novel centers on Jimmy’s disappearance from the outset, making that the overarching tension that holds the rest of the thematic qualities, in the film this is left towards the end in order to act as the climatic shift. Though this may indeed be a thoughtful way to translate the scope of the novel onto the silver screen, it does change the tone of the film since Jimmy’s disappearance becomes about validating Lisa’s ongoing visions and subsequent fears not only to others but to herself as well. This adds tension and a sense of disconnect between the characters that leads to a necessary resolution, but those who are partial to the novel might find that this shift alters more than just the timeline of the story.

Overall, Todd’s film is exciting and beautiful to watch. It contains some moments of stellar performance, especially in Shuswap lead Grace Dove’s portrayal of Lisa and in scene-stealing Anishnaabe actor Adam Beach’s portrayal of Uncle Mick. The musical performances from the Snotty Nose Rez Kids are also exciting and add dimension. Fans of Robinson’s novel will no doubt be excited to see the cinematic story on the screen but may find the pacing and scope a bit different than they expected.