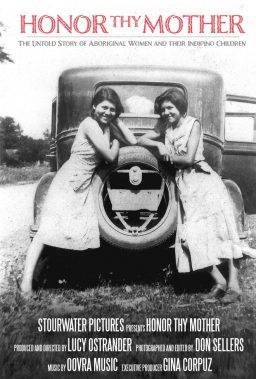 Celebrating the Indigenous-Filipino Community on Bainbridge Island and the Indigenous Women Who Brought it into Being: A Review of Honor Thy Mother

The field of Indigenous studies is being called on with urgency to listen to, center, and amplify the voices and experiences of multiracial, multiethnic Indigenous community members beyond whiteness, especially the important voices and experiences of Afro-Indigenous people. Relatedly, Filipino studies is being called on to stop harming and ignoring Black and Indigenous Filipinos, and to be accountable to Black and Indigenous communities. There are various books, films, and multimedia engagements that Afro-Indigenous, Black-Filipinx/a/o, and Indigenous Filipinx/a/o artists, organizers, scholars, and community members are developing and leading to share their important histories, experiences, identities, and voices.[1] The recent documentary Honor Thy Mother (2021) joins these necessary interventions, drawing attention to Indigenous-Asian experiences in the Pacific Northwest of colonially called North America.

Through oral histories, video clips, photographs, interviews, and first-hand accounts, Honor Thy Mother tells the story of the Indigenous-Filipino, or Indipino, community in the Suquamish territory colonially called Bainbridge Island, Washington State. This community came into being when Indigenous girls and women travelled to Bainbridge Island to work alongside Filipino migrant workers on berry farms during the Second World War. Many of these Indigenous girls and women were escaping the brutalities of residential and boarding schools, and came to the island from British Columbia, Alaska, and other parts of Washington State. While working together on these farms, Indigenous women and Filipino men fell in love, married, started families, and made homes on the island.

As a diasporic Filipina-British settler educator and community member, some of the key questions that I continuously ask in the work that I do are: how can settler Filipinx/a/os be better kin and relations to Indigenous lands and life? What are our responsibilities to these lands, and how can we work to live in these lands in a good way? How can we work towards justice and liberation for our community in ways that are deeply aligned with, and that support and work towards, Indigenous sovereignty and decolonization processes? I carry these questions with me as I witness Honor Thy Mother. The stories that the Indipino community shares in the film can help the settler Filipinx/a/o community to contend with, reflect on, discuss, and confront these questions.

While the documentary is a short thirty-one minutes, it is layered with complexities. The stories shared draw attention to the ongoing colonial violences enacted against Indigenous and diasporic Asian communities in so-called North America, including the genocidal residential and boarding school system, the violent supremacy of the English language, systemic forces that have led to the “model minority myth,” the widespread racism that both Indigenous and Filipinx/a/o communities have experienced in the so-called US, and the othering narrative of “yellow peril” that drove the internment of Japanese-Americans during the Second World War. Indigenous studies has historically discussed settler positioning through a largely white-Indigenous dichotomy that leaves out the unique, complicated histories and experiences of settlers of colour, which are distinctly different from white settlers.[2] These unique and complicated histories and experiences are often entangled in colonial violences that rage in our own homelands. For instance, American colonialism in the Philippines has made the archipelago unliveable for all too many Filipinx/a/os. This ongoing history has led to many Filipinx/a/os relocating to the so-called US. Into the current day, American colonialism has commodified the Philippines and its peoples into what Robyn Magalit Rodriguez (2010) has called a labour brokerage state — a global enterprise that requires and normalizes Filipinx/a/os leaving the homeland en masse to take up work and produce money for the country elsewhere, including, in large part, within the colonially called United States. Many Filipinx/a/os do not realize, upon coming to the United States, that they have relocated as settlers to stolen Indigenous lands.

The stories the Indipino community shares in Honor Thy Mother move beyond a white-washed framing of settler to unpack the experiences and power dynamics that shape settler of colour positionings in Indigenous lands. While the documentary importantly draws attention to the distinctive ways that colonialism enacts violence on both Indigenous and Asian communities, it does not shy away from the messiness of examining how diasporic Asians have also been complicit in colonial violences against Indigenous peoples — what Kãnaka Maoli scholar Haunani-Kay Trask (2000) and diasporic Asian scholars Candace Fujikane (Japanese-Filipina), Jonathan Okamura (Japanese), and Dean Saranillio (Japanese-Filipino) conceptualize and discuss as Asian settler colonialism.[3]

In a poem entitled “Settlers, Not Immigrants,” Trask writes, “Settlers, not immigrants,/from America, from Asia./Come to settle, to take./To take from the Native/that which is Native:/Land, water, women, sovereignty” (qtd by Fujikane and Okamura). While Trask was writing of her homelands of Hawaii, this poem is reflective of the Asian-owned and Asian-run berry farms in Bainbridge Island and the stories shared in the documentary too. As we learn in Honor Thy Mother, “by 1941, Bainbridge Island Japanese-American farmers owned over 500 acres of strawberry fields and controlled 80% of the agricultural industry,” an industry built on stolen Indigenous lands (Corpuz and Ostrander 10:52-11:04). Furthermore, throughout the film, Indipinos share how, growing up, they were encouraged to reject and be silent about their Indigeneity. As a result, Indipino children often grew up connected to Filipino cultures, but removed from their Indigenous cultures and nationhoods; indeed, some Indipinos discuss how they did not realize that they were both Indigenous and Filipino until later in their lives. The film opens with the genocidal atrocities of the residential and boarding school system, and connects these genocidal atrocities to the intergenerational experiences of shame and dismissal that Indipino children would face. In the film, Indipinos recognize that, even within the Filipinx/a/o community, it was commonly considered taboo to be Indigenous. In this way, the settler Filipinx/a/o community has extended genocidal harm against Indigenous peoples, nationhoods, and sovereignty.

But, as Anishinaabe scholar Niigaanwewidam James Sinclair importantly emphasizes, colonialism is only one branch of the tree of Indigenous experiences and territories[4] (305) — and survivance,[5] joy, love, and futurity beyond colonialism are at the heart of the stories shared in Honor Thy Mother. As the title of the documentary suggests, Honor Thy Mother is ultimately a film of honouring for the Indigenous women — the Indigenous mothers — who came to Bainbridge Island to build a future that was free, and who are so integral to the Indipino community. In one particularly powerful scene, shíshálh-Ilocano community member Yetaxwelwet (Anna Rinonos Hansen), daughter of Grace Augustine Rinonos, recalls the beauty of hearing her mother and her aunties speaking the Sechelt language — of the deep joy and happiness that they embodied and radiated when they spoke the language. And the film ends with deep joy and happiness too — by blending photographs of the Indigenous mothers smiling and laughing with video footage of the intergenerational Indipino community sharing and passing on their Indigenous cultures, traditions, and knowledges through drum-making, dancing, singing, and laughter. These closing images signify the strong, rich, liberated future of the Indipino community.

Despite being a Filipina who lived in the Pacific Northwest for the first twenty-five years of my life, prior to watching this film, I had no idea about the rich Indigenous-Filipino community that Indigenous women from colonially called British Columbia, Washington State, and Alaska helped to bring into being with such care, love, and dedication to a future that was free and joyful. I’m heartened to see the growing commitment that settler Filipinx/a/os are making to be better kin to Black and Indigenous communities in these lands: scholars and community organizers like Katherine Achacoso, Karla Villanueva Danan, Adrian De Leon, May Farrales, Jovie Galit, Kuttin Kandi, Josephine Ong, and Kaitlin Rizarri are asking difficult questions of our community, leading calls-to-action, and creating spaces for learning about what it means and would look like for our community to be better and more accountable relations. Honor Thy Mother is a necessary and urgent film that must become part of our advocacy and educational work; this documentary can help us further deepen our understandings of where we have failed as kin and of the power, strength, beauty, and futurity inherent to Indigenous and Filipino cultures, so that we can respectfully and responsibly support, deepen, and ensure the liberated future that the Indigenous mothers of the Indipino community helped bring into being.

Rodriguez, Robyn Magalit. Migrants for Export: How the Philippine State Brokers Labor to the World. University of Minnesota Press, 2010.

[1] As only a few examples: the 2015 documentary By Blood shares the stories and experiences of the Cherokee Freedmen. The Indigenous Filipinx/a/o educational initiative and community IKAT (Indigenous Knowledge, Art, and Truth) raises awareness to Indigenous issues in the context of the Philippines. And the social media movement #MagandangMorenx, started by Black and Indigenous Filipina artist Asia Jackson, confronts colourism and celebrates the Black-Filipinx/a/o community.

[2] In Settler Filipino Kinship Work: Being Better Relations within Turtle Island, I define the positioning of settler in the following way: “I understand settlers as those of us who are not Indigenous to these lands and who do not have ancestral histories of being kidnapped from and forcibly displaced from one’s homelands through the atrocious transatlantic slave trade that brought Black peoples by force to Turtle Island. Within [diasporic Filipinx/a/o] organizing spaces I have been part of, I have, at times, encountered the misconception that only white people are settlers, that settler is a synonym for colonizer. I write from the belief that one can simultaneously be a settler and an immigrant of colour, or a descendant of immigrants of colour, who came to these territories not with colonizing intentions but rather in hopes of a better life away from the ongoing colonial atrocities in our own homelands, and who now benefits from and often unknowingly buys into settler colonialism in Indigenous lands” (Morford 5).

[5] In his book Manifest Manners: Narratives on Postindian Survivance (1999), Anishinaabe scholar and writer Gerald Vizenor first claimed this concept for Indigenous peoples, defining it as “an active sense of [Indigenous] presence, the continuance of [N]ative stories […] Native survivance stories are renunciations of [colonial] dominance, [Indigenous] tragedy and victimry” (vii). Thus, joy, love, and futurity are inherent aspects of survivance.