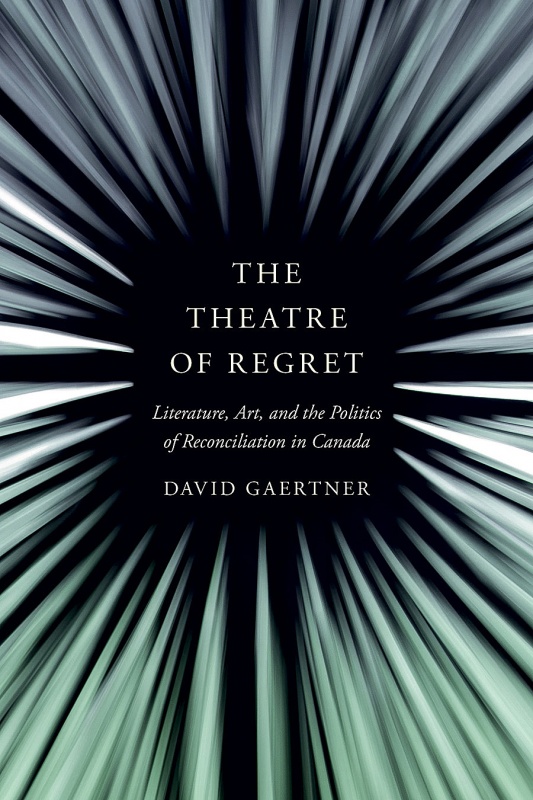 The Theatre of Regret: Literature, Art, and the Politics of Reconciliation in Canada

In The Theatre of Regret: Literature, Art and the Politics of Reconciliation in Canada, David Gaertner, an academic author and settler-scholar, centres Indigenous literary and artistic works to contribute to critiques of reconciliation. The book is a mobilization of Gaertner’s privilege to uplift the voices of Indigenous peoples, as a means to scratch at structural racism and white supremacy. The text aims to trouble Canada’s version of reconciliation by interfacing with critical Indigenous studies, Canadian studies, and Indigenous literature and highlights ways in which “the discourse of reconciliation enables resource extraction and protects settler fragility” (15).

In Chapter 2, Gaertner points out the idea of static as a kind of interference that can hinder settler understanding of the Truth and Reconciliation Commission of Canada (TRC). The TRC is the only commission internationally that has eliminated the identities of the potential perpetrators — blocking the names from even entering the record through survivor narratives and “maintaining their invisibility and anonymity all the way through the Commission’s activities” (76). The absence of perpetrator testimony places undue burdens on survivors to bear the weight of the testimony with real physical, emotional and ongoing consequences. Furthermore, the Canadian state plays the leading role in a theatre of regret, where survivors within this commission are positioned to give testimony and the state is acknowledged and distances itself from “historical” injustice while still maintaining power within an unchanged colonial system. The author cites Dallas Hunt who states, “state-sponsored reconciliation efforts tend to require that Indigenous Peoples ‘reconcile’ themselves to their continued colonization” (83).

Poetics become ceremony in the poems of Sky Dancer Louis Halfe. The poem entitled, “Crying for Voice” depicts the silencing effects of colonialism: “I must pull frog/ pry its webbed feet/ from snails in/ my throat” (91). The poem, “Der Poop” is a letter to the Pope speaking “rez English” that couches anger towards apologies with humour and makes clear the interference of the Catholic Church with Cree ways of knowing and being: “dese men, pope, don’t know what /tobacco mean, what suffer mean, / …I dired of all dis kimoti (Cree word for stealing), pope”  These lines allow the poet to speak truth in a distinct voice using the Cree language. The narrator clears her throat (an expulsion of colonialism) and makes space for Cree expression, while also critiquing what has been stolen and by whom. Readers of Halfe’s poems become witnesses to Cree poetics and the vitality of the Cree language through resisting colonial “whiteout” static through love and resurgence of life, land, and language. Indigenous women, trans and queer creatives expand the boundaries of recognition and representation outside a calcified context of the TRC.

The Theatre of Regret is a timely book that implores Canadian settlers to look at the uncomfortable truth of the narratives we tell ourselves: the truth of Residential Schools and the truth of ongoing settler colonialism and violence. Through reading and witnessing Indigenous artists, critics, and poets, we can hold space for land, language, culture, and community in order to make structural and systemic change that actualizes Indigenous sovereignty and self-determination and decenters the empty performances of reconciliation.

Gaertner, David. The Theatre of Regret: Literature, Art, and the Politics of Reconciliation in Canada. Vancouver: University of British Columbia Press, 2021. 320 pp. $34.95 Epub.