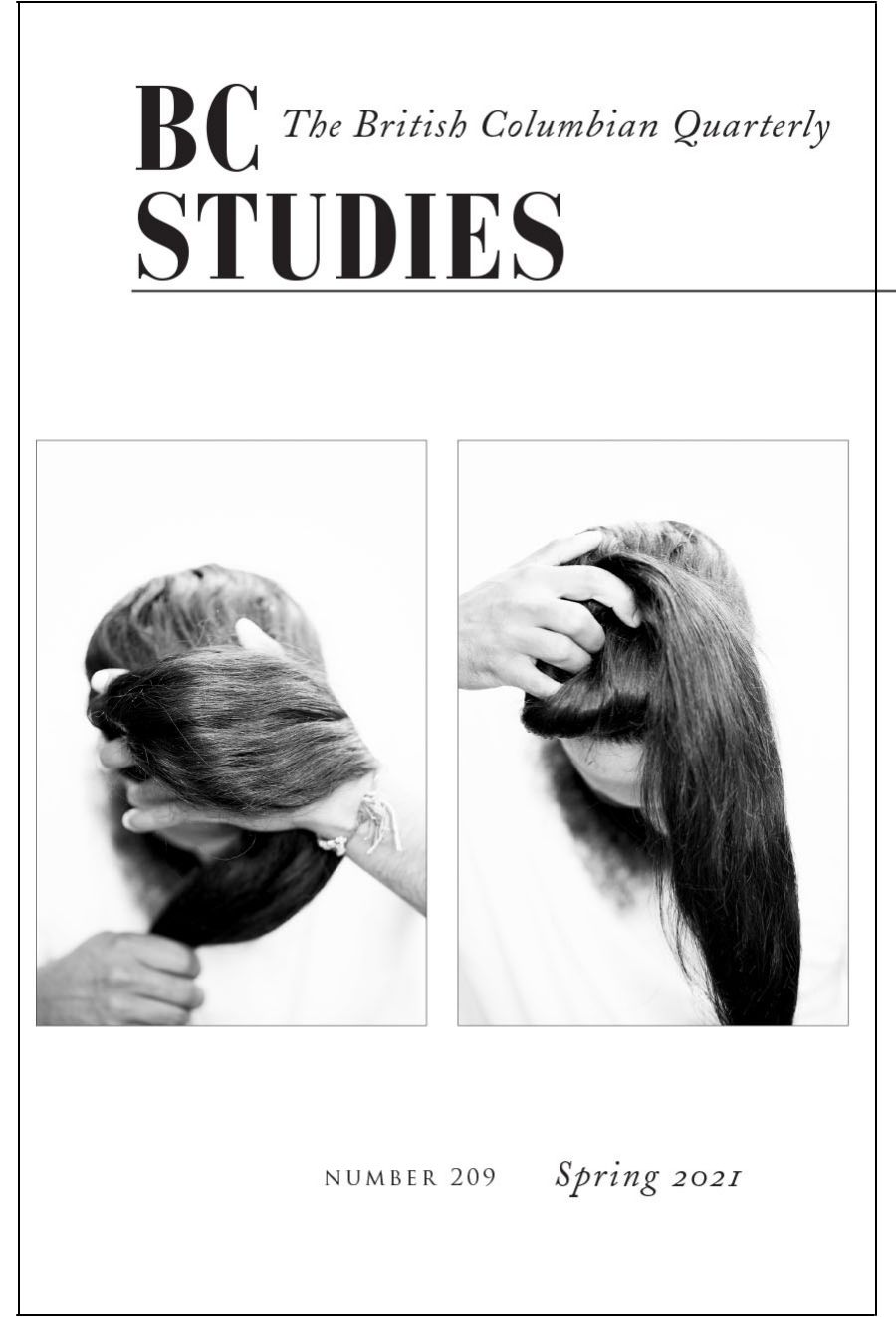 BC Studies no. 209 (Spring 2021) features the 2020 BC Studies Prize announcement, cover art from Suvi Bains, and a piece composed by Mary Ellen Turpel-Lafond (Aki-kwe) and Harmony Johnson (sɛƛakəs), authors of In Plain Sight: Addressing Indigenous-specific Racism and Discrimination in BC Health Care.

In Plain Sight: Addressing Indigenous-specific Racism and Discrimination in BC Health Care

Making Métis Places in British Columbia: The Edge of the Métis Nation Homeland

“Oh, Weldon Chan! Where Are You Hiding?”: Sanctuary and Fugitivity in Memory and Song, 1958 to the Present

A Misconception: The Relationship between the Chinese-English Daily Newspaper and the Chinese Times

Chief Supernatural Being with the Big Eyes (2021)

Not your usual science: a Future Ecologies Podcast Review

Future Ecologies is not your typical science podcast. Strongly reminiscent of Radiolab (2002–), the renowned WNYC series from the “golden age” of podcasting (Berry 2015), Future Ecologies investigates “the shape of our world,” or the...

Go Do Some Great Thing: The Black Pioneers of British Columbia

The revised third edition of Kilian Crawford’s ground-breaking book on BC’s Black pioneers is timely and essential reading. It is a critical corrective to omissions and erasure in both academic histories and in popular understandings,...

The text of Kamloopa: An Indigenous Matriarch Story extends well beyond its own parameters, both literal and figurative. Syilx, Tsilhqot’in, Ktunaxa, and Dakelh playwright Kim Senklip Harvey offers a thoughtful, funny, and compelling exploration of...

On 12 July 1776 Captain James Cook, Royal Navy, sailed from Plymouth, England, in the three-master collier, Resolution, in search of the fabled Northwest Passage. It was a voyage that swept Cook and the crews...

A Bounded Land: Reflections on Settler Colonialism in Canada

Historical geographer Cole Harris, professor emeritus at UBC, has in his latest book brought together a number of his articles, some previously published, to focus on the subject of settler colonialism in Canada. It is...

“There is no single historiography of internment” in Canada, write Rhonda L. Hinter and Jim Mochoruk in the introduction of this ambitious collection of essays (9-10). Siloed histories of particular internments, they suggest, convey episodic...

BC Studies no. 209 Spring 2021 | Bibliography of British Columbia

Caroline F. Butler is a cultural anthropologist whose academic research has focused on Indigenous fisheries, commercial fisheries and property rights, local ecological knowledge, and research processes and methods. She has worked with the Gitxaała Nation on academic and community-based research projects since 2001 and has worked for the Gitxaała Nation government since 2009. As manager of planning and community research, she coordinated community-based research, collaborative research, spatial planning, and community engagement processes in Gitxaała Territory. In her current position as cultural projects manager, she supports language revitalization, heritage research, and repatriation.

Gabrielle Legault is Métis from Southwest Saskatchewan (Lac Pelletier). She is an assistant professor in Indigenous studies in the Department of Community, Culture, and Global Studies at the University of British Columbia (Okanagan Campus), where she lives as a guest on unceded Syilx Territory.

Laura Madokoro is a historian and associate professor in the Department of History at Carleton University. Her research explores the history of migrants, refugees, humanitarians, and state authorities in shaping the possibilities and experiences of refuge. She is especially interested in questions of race and exclusion and is currently working on a monograph about the history of sanctuary in Montreal.

Charles R. Menzies is a member of the Gitxaała Nation. He is also a professor in the department of anthropology at UBC.

Kelsey Siemens, MA, is a registered clinical counsellor in Abbotsford, BC. She has published academic journal articles and book chapters on the topics of psychology, eating disorders, sexuality, and embodiment. During her undergraduate studies, Kelsey doubled majored in history and worked extensively as a research assistant in the history department. This is her first history publication.

Xueqing Xu, PhD, is an associate professor in the Department of Languages, Literatures and Linguistics at York University. Her research centres on Chinese Canadian diasporic literature and media, women’s studies, and modern Chinese literature. She has co-edited five books, and published, in both Chinese and English, more than forty articles and chapters on Chinese Canadian diasporic literature and media, modern Chinese literature, and women writers.