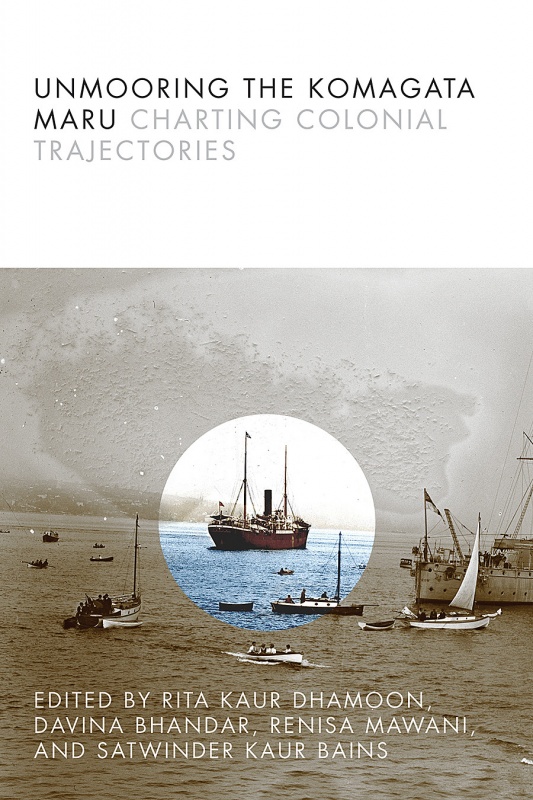 From food (Valenze, 2012) to crops (Ali 2020, Rappaport 2019) to commodities (Curry-Machado, 2013) to digital cultures (Punathambekar and Mohan, 2019) and to empires (Bayly, 2003; Hopkins, 2003) there has been a steady scholarly commitment to reimagining the relationship between the global/universal and the local, even “theorizing the local” (Wolf 2012). Unmooring The Komagata Maru. Charting Trajectories, edited by Rita Kaur Dhamoon, Davina Bhandar, Renisa Mawani and Satwinder Kaur Bains, offers an interdisciplinary lens with which to re-engage the “local” history of the Komagata Maru and emplace it within contemporary understanding of immigration and racial exclusion on a “global” scale. In joining a growing body of transnational texts, Unmooring The Komagata Maru enriches the field by its methodology of interrogating a singular event through time, space and a vast array of disciplinary frameworks.

SS Komagata Maru sailed to the western coast of the Dominion of Canada in 1914. Its 376 passengers were deemed illegal, detained and then 340 of them were forced to return to Calcutta.  While the incident created ripples at the time, it receded in popular memory. In the last few decades there has been fresh interest in locating the event within Canadian historiography. This book builds its intervention on the grounds that such approaches have erroneously restricted the history of the Komagata Maru within the parameters of a nation. As argued in the Introduction, these works have either seen the history of the Komagata Maru as signifying a “South Asian migration” story or as a “past racial exclusion” contrasting with “present multicultural inclusion” (8-12).  Unmooring The Komagata Maru decenters the event from its current and long-standing territorial moorings and argues that using a colonial analytic, in an additive rather than substitutive sense, is necessary to appreciate the true caliber of this event in history.

Following the introduction are four parts, the work of 19 contributors, and three appendices. Understanding the many layers of the Komagata Maru incident by placing it within the oscillating pressures of anti colonial resistance and a determined colonial biopower is the focus of Part 1. The chapter “The Politics of Anti Colonial Resistance in the Journey of the Komagata Maru” allows readers to appreciate the transnational legacy of this event. In it, Fletcher presents how the demand for imperial citizenship, often couched as a desire for “another world,” disrupted the tenuous relationship between white settler nations and Indigenous communities (52). Framing anti-colonial sentiments in aspirational terms contrasts sharply with the continued violation faced by Komagata Maru passengers even when they reached Calcutta. By looking at the afterlife of the incident in Calcutta, Chattopadhyay’s chapter traces the developments of individual memory into “class memory” and the associated development of radicalism, diaspora identity and labor movements (50). As Bains sums up for this section, immigration restrictions that were structured around the “inassimilability” of South Asians were a not a far cry from the 1890 Act that branded aboriginal people as “aliens” in their own lands (77).

Part 2, “Migration Regimes in Colonial Contexts” takes its cue from the global conversation that the return of the Komagata Maru sparked, especially given that the desire to migrate to Canada was not an audacious one. Together, the chapters by Mongia, Hasan et al and Bhandar explain the historical construction and continuous reproduction of power dynamics that white nation states resort to through the rejection but also conditional and at-will admission of non-white migrants. Mongia shows how the detention of Komagata Maru passengers became a key moment for the judiciary to establish the sovereignty of the Canadian Parliament and its power to distinguish between British subjects as it thought fit. There was no legal basis for turning Komagata Maru passengers away, and even more difficult was to emplace race, the real reason, within legal language. The usefulness of Mongia’s reiteration that the “eventfulness” of an event can be ensured only through continuous and critical conversation is well evidenced by the chapters that follow (115). Hasan et al’s analysis of the discourse on immigrants as model minorities and good migrants and Bhandar’s of border management both highlight the continuation of early 20th century racialized and colonized mindsets.

In Part 3, “Colonial Temporalities of Memory and Cultural Production,” Mizukami, Spector-Marks, and Hameed all meditate on the function of memory in history and find it to be contingent, refracted, changeable and an “event”  that may not always be a repository of historical truth-claims.  Mizukami shows how the Japanese crew on Komagata Maru recalled the incident as a problem of Indian colonial history and not Canadian immigration policy (175-176).  The San Francisco-based Ghadr and London- based India news papers engaged with the discourse on imperial citizenship, though essentially seeing the passengers only as British subjects. Spector-Marks demonstrates how abstracting the will and intention of passengers has come at the cost of this “global event” not translating into any transnational solidarity (191-192). Hameed describes memory as an “image witnessed from afar” and elucidates why such images may resonate with the present but may also remain disjointed (197).

Part 4, “Disrupting Colonial Formations of Nation” exposes the fragilities that lie at the heart of nation-formation and its construction. Dua shows that within Canada’s refusal of Komagata Maru passengers lay deep-seated fears centered on the body of the non-white woman. An “imagined crisis” that saw Sikh women as a threat to the Canadian family and the nation built around monogamy took roots. Kaur analyzes how the experience of Sikh ethno-sub nationalism rooted in historical experience in India manifests itself in the national space of Canada among Sikh Canadians, revealing their different subjectivities.  Somani shows how an intended nationalist project of constructing forgetting can trigger memories of exclusion of minorities and reveal racial hierarchies embedded within nationalist projects. Mawani questions the fundamental claim of the Dominion of Canada to deny entry into land that was not unanimously considered theirs (288).  Mawani articulates how the Komagata Maru event functions as “minor history” and is able to amplify its impact globally but also project back locally. Finally, Tariq Malik’s poems brood on history, longing and the denial that lies at the heart of immigration trajectories to the West.

Unmooring The Komagata Maru is an important transnational text that sheds light on the history of British Columbia and the Pacific Northwest, as well as its present. While the argument in favor of using a colonial analytic is well-evidenced, this reviewer found the implicit hint about the limitations of nationalist history in need of more clarification. Since the chapters of the book resonate so well with the central argument, a lofty goal for an edited volume, an epilogue would have made for a great addition and offered an opportunity for such clarification.

While Unmooring The Komagata Maru is a transnational volume that links the local with the global, its lateral engagement will be instructive for scholars and students of various persuasions. Unmooring The Komagata Maru dwells on the problems of subjects versus citizens, (Mamdani 2018), border fluidity (Mignolo 2012, Sorensen 2018), transnational public space where disparate groups can converse called “cosmopolitan thought zones,” (Manjapra and Bose 2010) and, finally, equality in nation-states with histories of “past racial exclusion” (Aulino et al, 2013). This edited volume is an important contribution to epistemology as well as methodology.

Hopkins, A. G. Global History: Interactions between the Universal and the Local. New York: Palgrave Macmillan, 2006.

Rappaport, Erika Diane. A Thirst for Empire: How Tea Shaped the Modern World, 2019.