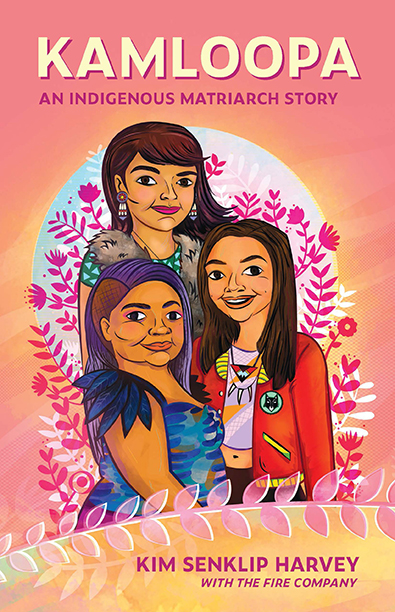 The text of Kamloopa: An Indigenous Matriarch Story extends well beyond its own parameters, both literal and figurative. Syilx, Tsilhqot’in, Ktunaxa, and Dakelh playwright Kim Senklip Harvey offers a thoughtful, funny, and compelling exploration of the complexities of Indigenous community making and knowledge reclamation by exploring the meeting of three different characters who also embody spirits and figures that guide the characters through their own individual and collective journeys. Focused on the textures of interpersonal relation, Kamloopa follows two sisters, Mikaya and Kilawna, who have a chance meeting with Edith (aka IFN1 – Indian Friend Number 1) that leads them on a journey to the Kamloopa Powwow as each of them explore what it means to be Indigenous in the contemporary moment.

In between hilarious moments of tweeting Anishnaabe actor Adam Beach while reciting lines from Smoke Signals or joking about winning money at the bingo hall, the three women also cover such in-depth topics as the complexities of feeling like one is constantly representing all Indigenous people, dealing with anti-Indigenous microaggressions in health care, not feeling truly Indigenous, and being disconnected from ancestral place and ceremony. All three are matriarchs in their own way, each taking on moments of care and wisdom over the other two. In this, the story is cyclical and the power dynamics are fluid. There are moments of joy, laughter, and hope that animate the page, balancing the moments of despair and violence so that the latter don’t become definitive of Indigeneity for either the characters or the reader. As Algonquin Anishinaabe dramaturg writes in the foreword, Kamloopa works to “counter the ongoing misrepresentations of Indigenous women in historical and contemporary media” (vii). The play lives up to this promise in spades, offering us a glimpse into the lives of three women whose experiences are both messy and beautiful, limiting and freeing.

Beyond the success of the play itself, what is especially notable is how the commitment to reciprocity that is explored in the text is evidenced in the literal material object of the play itself. Accompanying the play is a rich and informative foreword from Lachance as well as Kimi Clark’s ‘zine “study buddy” that outlines the production of the play itself, including the kinds of protocols and practices that are necessary to realize a production that is true to the commitments of Indigenous theatre. As Lachance writes in her foreword, this play and its production have been built through what she calls “Relational Indigenous Dramaturgies” which she describes as “self-affirming practices that encourage us, as Indigenous people, to look to our own laws, practices, governance systems, and world views to create alternative ways to make our art” (vi). This relationality is built into the text, with participants offering incredibly edifying secondary materials meant as both an act of reciprocity with the play itself as well as a guide for interacting with the piece in a reciprocal way. In this, it remains rooted in establishing a reciprocal relationship with the land and its people, much as the play itself is focused on following the sisters and their friend as they learn what it means to be in relation to their traditional territories around so-called British Columbia.

Overall, Kamloopa is a notable and exciting contribution to both Indigenous theatre and literatures. It’s focus on intra-Indigenous (rather than settler-Indigenous) relations marks it as a relatively unique text that would teach beautifully, given the supplementary materials.