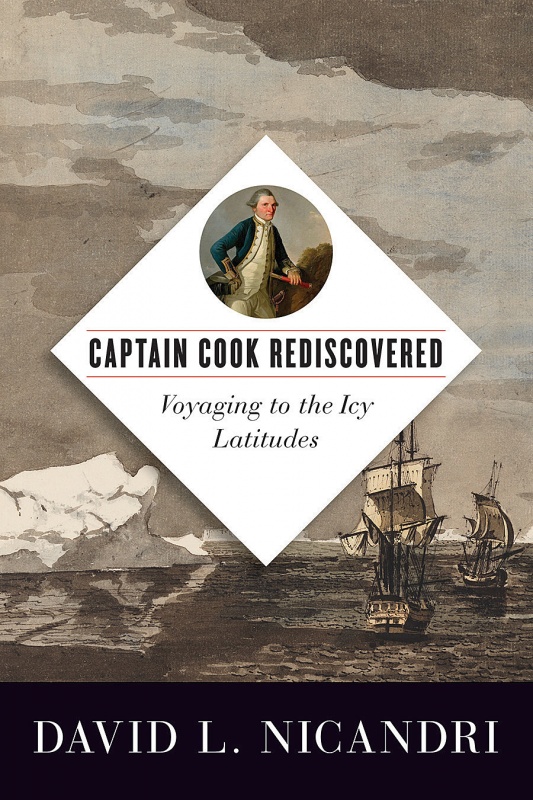 On 12 July 1776 Captain James Cook, Royal Navy, sailed from Plymouth, England, in the three-master collier, Resolution, in search of the fabled Northwest Passage. It was a voyage that swept Cook and the crews of the Resolution, and its tender, the Discovery, from the icy wasteland of the Arctic to the tropical waters of Hawai’i. It was a voyage that would change eighteenth-century understanding of science and geography – and of the limits of sailing in frozen waters. Cook might well have remained in England; however, he was unable to turn down the opportunity of this his third voyage to the Pacific – the first had been in 1768 to observe the transit of Venus at Tahiti. A second voyage had determined the existence of the Antarctic and was prodigiously important in the gathering of botanical information, ethnographic descriptions, and artistic observations. This was arguably the greatest of Cook’s trio of voyages. The third voyage was hardly less significant, but it went to high Arctic latitudes through Bering Strait and to the easternmost point of sail at Icy Cape, Alaska. And when Cook was killed on the shore of Kealakekua Bay, the Big Island, the world of exploration changed undeniably, for its greatest proponent and servant had been removed from the scene. David Nicandri calls it murder, and commentators on the events of St. Valentine’s Day 1779 will long continue to discuss and dispute motives, mistakes, and misunderstandings of that day. Certainly, soon thereafter harmony was restored, and Captain George Vancouver, mentored by Cook, had smooth sailing in dealings with Hawaiians. Concentration on the events of Cook’s death have deflected attention away from the challenges and achievements of these small ships bound on scientific discovery to determine the features of the world’s largest ocean, its littorals and islands, its hazards and its economic prospects. It was on this third voyage that Cook sailed his ships into King George’s Sound, as he called it, now Nootka Sound, and it was there for a month that observations were made of the Indigenous peoples. Illustrations and charts come from that visit: Cook had lifted the curtain on a world entirely unknown to the European mind.

David Nicandri has ransacked the archives and libraries in order to demonstrate, which he fully does, his view that although many have seen Cook as an explorer of the tropics it is in icy wastes and choked channels that Cook was at his best as a careful navigator and observer. Cartographers on board, Henry Roberts and William Bligh (of Bounty mutiny fame) added hydrographical details to the chart. Not long thereafter, mariners came to trade for sea otter pelts. The Pacific was becoming smaller, more finite, a place for exploitation. Speculation about a Northwest Passage did not diminish and went on for another century until the Navy solved the bugbear riddle that had commenced in Elizabethan times and Frobisher’s voyages that yielded “fool’s gold” and no sea lane. The author has used recent appreciations of fellow scholars to welcome effect, and the bibliography and index will help inquisitive researchers of the future to advance their own appreciations. His fine concluding chapter presents a program of requirements that future writers, scholarly and other, will want to examine or omit at their peril.