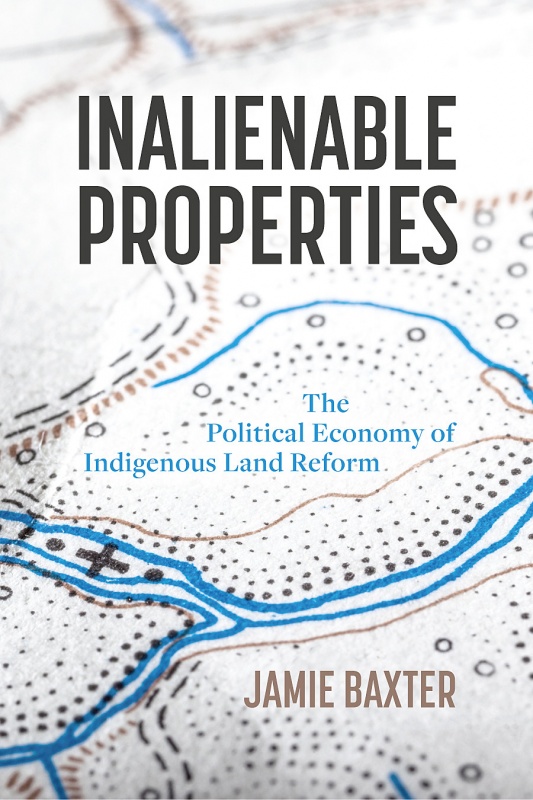 In Inalienable Properties: the political economy of Indigenous land reform (2020), Jamie Baxter presents his readers with a puzzle surrounding the inalienability of Indigenous land tenure systems. Baxter asks, ‘why does inalienable property persist in some settings and not others?” and further, “how are both formal and informal limits on the free alienability of land rights sustained by self-determining political communities over the long term?” (5). In working to solve this puzzle, Baxter employs tools from game theory and institutional analysis to develop and analyze a theory of change and bring greater focus on the role leadership has played in existing examples of Indigenous land tenure reform.

The book is organized into six chapters, beginning with Baxter mapping out the puzzle for us on the ground and in the literature. Taking a broad approach to the understanding of inalienability — which is a set of formal rules or informal norms that limit the range of market transactions for an entitlement— Baxter effectively refutes Harold Damsetz’s (1967) theory regarding the inevitable nature of alienable land transitions. Damsetz posits that property regimes evolve over time from systems of inalienable, communally held property to systems of privately held and alienable rights. Baxter illustrates that there is a greater complexity to collective decision-making that has driven a variety of inalienable regimes that persist in current examples of Indigenous land reform.

In the second chapter, Baxter frames the puzzle through a retelling of how current property regimes and institutions that govern these regimes came to be, discussing inalienability through colonial history and highlighting processes of assimilation for Indigenous land regimes. Baxter provides a useful summary of this history and the current state of these regimes — not an easy feat given such a complex history and diverse political geography. Going deeper here, Baxter should further interrogate the institutional power dynamics that exist due to the forced replacement of traditional governance systems by the federal government through the installation of Indian Act band councils, and how tensions within these institutions at a community level affect decisions regarding land reform. This would lead to another question of community consent in institutional decisions that are central to the development of communally held Indigenous lands — something that Baxter assumes but does not detail.

Building on the gaps Baxter has found within Damsetz’s theory, in the third chapter he adopts an organizational lens to bring a new perspective to the central puzzle, suggesting that land reform in Indigenous communities resembles the dynamics and challenges of organizational teamwork. In this vein, he introduces a formal model that considers team production of institutional change and illustrates how cooperative team production should work through the prisoner’s dilemma. Baxter’s approach is unique and interesting, as he places an important emphasis on exploring the role of leadership as well as the relationship between leaders and the community that they are making decisions for.

Baxter tests this model over the next two chapters, through four comparative case studies. First, he explores land reform in urban/semi-urban locations of the Membertou and the Westbank First Nations. He then revises the model and applies it in more rural cases, exploring the property regimes created by the Nisga’a Final Agreement and the James Bay and Northern Quebec Agreement with the James Bay Cree. Baxter convincingly argues that leaders who prioritized the preservation of community lands have played a significant role in shaping land reform that sustains inalienable rules while helping to shape political institutions that can maintain these rules beyond the leader’s tenure.

I find that Baxter’s exploration is missing a fundamental piece of the puzzle by not considering Indigenous perspectives on how land influences conceptions of identity, and how these conceptions inform land reform decision-making. The marketability of land appears to be a key focus of Baxter’s understanding as to why free alienability should be pursued but he doesn’t seem to provide an understanding as to why Indigenous communities may prefer to maintain inalienable property regimes and forego potential economic efficiencies. While Baxter mentions that a leaders’ cultural commitments may be a factor in the type of land reform objectives they present to their community, relationality to land may play a significantly larger role in the type and level of inalienability of the tenure system a leader attempts to establish and a community might support. This missing piece would round out Baxter’s poignant insight on the form of political institutions leaders employ for community decision-making based on the type (material vs. non-material) of rent they seek.

By applying the model to these four diverse case studies, Baxter draws some very useful insights that are particularly relevant to an increasing number of First Nations policy analysts, land managers, and community leaders in British Columbia that are imagining what a self-governed land code for their own people might look like within a Canadian framework. Overall, Baxter leaves us with many valuable considerations from these cases and builds upon our understanding of land regime transitions in Indigenous communities. Further, he directs us towards new questions and veins of thought on the future of inalienable property as we continue to put this puzzle together.