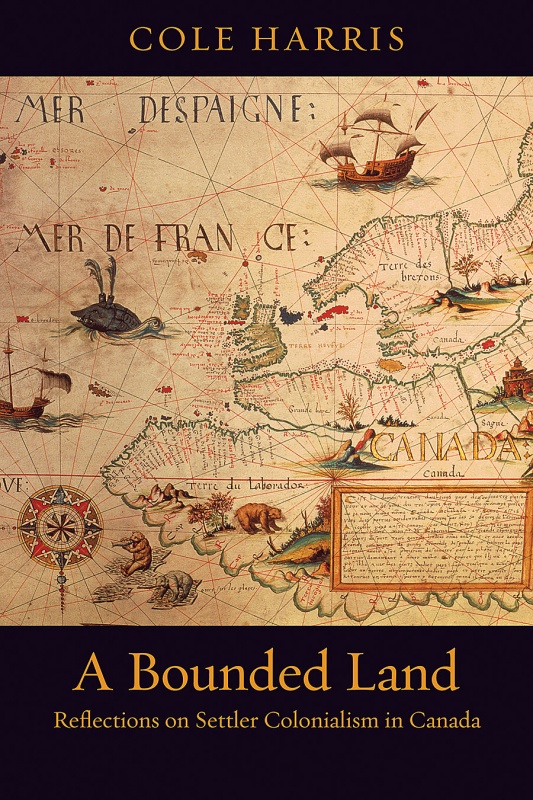 A Bounded Land: Reflections on Settler Colonialism in Canada

Historical geographer Cole Harris, professor emeritus at UBC, has in his latest book brought together a number of his articles, some previously published, to focus on the subject of settler colonialism in Canada. It is of interest primarily to an academic, Canada-wide audience.

A Bounded Land, Reflections on Settler Colonialism in Canada (2020), is the culmination of fifty years of study by Harris of the settlement of the country and the dispossession of Indigenous peoples. The historical geography spans five centuries and demonstrates the relationship of people with each other and with the land.

Not a new concept, “settler colonialism” has in the last two decades since the late Patrick Wolfe’s ground-breaking work gained credence as a subject of enquiry, as Indigenous topics have evolved. In the book’s introduction, Harris provides a simple definition of the subject… “I mean simply that form of colonialism associated with immigrants who became the dominant population in the territories they occupied, and, in doing so displaced the Indigenous peoples who previously had lived there” (3). Harris introduces his own settler background and developing interest in this subject.

Harris has stitched his previous work into a coherent whole in this book. The result is a series of essays organized into five Parts of three chapters each, beginning with his brief (1997) look at the Fraser Canyon from two perspectives – the explorer and the Indigenous inhabitants of that space. Part 1 continues with an overview (2008) of early explorations to Canada’s eastern shores and the map-making that went along with them, followed by a chapter on the smallpox epidemic around the Strait of Georgia (1994). Part 2 is a look at Acadia and the marshland settlements around the Bay of Fundy (2008); the seigneurie of Petite-Nation west of Montreal is Harris’ earliest (1971) essay in this collection; and the settlement of Mono Township (1975) dwells on the migration of Ulster farmers to Ontario’s Niagara Escarpment. The themes of Part 3, European beginnings in the Northwest Atlantic (1984) and related essays on how Europe was simplified in the New World (1977) and how place was constructed in early Canada (2015), introduce theoretical and comparative ideas. Part 4 begins with a short piece on the configuration of the BC’s Lower Mainland in 1881 (1992) followed by “The Struggle with Distance” (1997), a classic thesis on the impact of transportation and communication on settlement; and “Indigenous Space” (2002), focussing on reserves in BC.

Part 5, “Theorizing Settler Colonialism,” is the culmination of Harris’ thinking from the previous works, and in his own words states, “what are probably my most intricate writings on British Columbia” (17). “Making an Immigrant Society” (1997) demonstrates how societies change in different settings; “How Does Colonialism Dispossess?” (2004) asks “How was colonial power deployed to achieve this geographical effect” (236), that is, the dispossession of Indigenous land? Harris draws on Edward Said, Michel Foucault, David Harvey, and other thinkers for answers.

The last essay, called “Postscript: The Boundaries of Settler Colonialism,” sums up the collection and compares settled and unsettled spaces from the late 19th century to the late 20th. The view moves to the North where Indigenous lives were transformed but where they remain the greatest population, and to the present where Indigenous voices are growing stronger and their numbers are increasing.

The concept of settler-colonialism is not touched on explicitly in all the essays – they were written before the term gained purchase. However, each chapter is preceded by an introduction that is newly minted and essentially provides an encapsulation of Harris’ current views. For example, “In my view, migration recontextualized people…”; “wherever… people without means tried to farm where farming was hardly possible, the results were much the same” (68); “In a different place, lives were working themselves out in different ways” (52); “…disease and depopulation would transform the terms of the settler-colonial engagement with Indigenous peoples and their lands” (36).

Harris has demonstrated how “settler colonialism in Canada has been a bounded enterprise.” I only understood the import of “bounds” by the end of the book. “Settlers could not use most of the land” [bounded by their own imagination and history], and Indigenous peoples could and did [use the land] but were themselves bounded by reserves and treaties, by government rules and laws, and by the prejudice and growth of the settler population.  But Canada’s geography itself formed boundaries – the US border to the south, tundra and ice to the north, and the Canadian Shield and Cordillera which constrained European settlement until technology and modernization eroded some of the natural barriers. Harris touches on the latest form of colonialism in Canada’s North without labelling it – extractivism. Historian Allan Greer expands on this topic.

As a series of essays, old and new, there is a degree of repetitiveness in Harris’ book.  His analysis is here and there dense and requires attentiveness. He states the same thing in different ways which is perhaps more helpful to the reader in understanding his thesis.

The illustrations are important to explain the text, including reproductions of historical maps and new ones by UBC cartographer Eric Leinberger. Some more images would have made the book more attractive. I am thinking of the drawings of Captain George Vancouver’s 1792 voyage, showing an Indigenous settlement on the Northwest Coast and, if they exist, images of the Petite-Nation, Mono Township, and Acadia.

The Notes and Readings are informative in tracing Harris’ thinking, followed by a concise Index.

In A Bounded Land, Cole Harris has produced an eloquent compilation on the subject of settler colonialism in Canada. As a work of historical geography, it is a critical perspective into this field of inquiry in the footsteps of Patrick Wolfe, Allan Greer, and others.

Foucault, Michel. 1979. Discipline and Punish: The Birth of the Prison. New York: Vintage.

Wolfe, Patrick. 2006. “Settler colonialism and the elimination of the native.” Journal of Genocide Research, 8(4).

Wolfe, Patrick. 1999. Settler Colonialism and the Transformation of Anthropology: The politics and poetics of an ethnographic event. London; New York: Cassell.