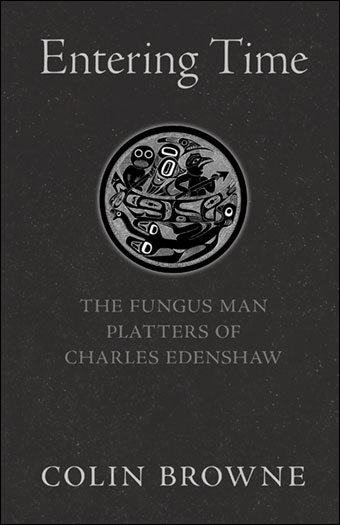 In 2013 the Vancouver Art Gallery’s Charles Edenshaw exhibition brought together three argillite platters made in the late 1880s by Da.a. xiigang, Charles Edenshaw – one from the Field Museum in Chicago, one from the Seattle Art Museum, and one from the National Museum of Ireland’s Ethnographic Collection in Dublin – that depict an episode in the epic Haida narrative Xuuya Kaagang.ngas (known in English as Raven Travelling, or Raven Kept Walking) as told by Sgaay, John Sky to anthropologist John Swanton and his interpreter Henry Moody at Skidegate in 1900. In this dense, small, and eloquent book, Colin Browne, an acclaimed poet and documentary filmmaker who has written about the Surrealists’ fascination with the Indigenous art of the Northwest Coast,[i] articulates the many profound meanings and wide-ranging interpretations that he discovered in the platters’ evocative but somewhat mysterious imagery. “I’ve asked myself,” he writes, “if it is possible to apply the aesthetic criteria to a nineteenth-century argillite carving that I am in the habit of applying to a work of Western classical or contemporary art” (21). This is an important question. Non-indigenous writing about Northwest Coast styles, attributions, artists, iconography, and symbolic meanings is rarely explicit about the conventions of European art history upon which it is based, and the art historical critique of Indigenous art in general has tended to be a separate, self-enclosed discourse. Browne’s study of the three argillite platters demonstrates that yes, it is indeed possible to apply the same aesthetic criteria, as well as interpretive methodology, to both nineteenth-century argillite carving and Western art. Weaving together a Haida oral history transcribed and published by an American anthropologist, contemporary Haida understandings of the continuing relevance of that history, symbolic analysis that could be applied to the art of the Surrealists and other European art movements, and accounts of those Surrealists and his own settler family’s history, Browne has given us a new perspective on an art form, and possibly on our own histories.

For the book is imbued with a sense of place as well as time. Browne begins with an evocative account of his own colonial family’s physical and intellectual isolation in a Vancouver Island village, obviously Cowichan Bay, where his mother excelled on the second-oldest grass tennis court in the world (which is still there) and where the neighbouring Qu’wut’sen people (who are still there, too) lived in a different, parallel world. He writes poetically of faded family albums, of relatives who seemed like “startled characters who left the stage at intermission and who were later discovered in another country, heading west” (5). It’s a nostalgic story of dislocations, as is the story of a young Surrealist from Paris, Wolfgang Paalen, who would have passed by Cowichan Bay in 1939 on his way to Victoria. The son of a European Jew, Paalen had travelled to the Northwest Coast in search of “an idealized, still enchanted world where the border between the conscious and the unconscious mind was permeable” (13), where Indigenous culture retained the values that his own had lost. Paalen collected Northwest Coast art, but not argillite carvings. (Because argillite carvings were made for sale or trade rather than for Indigenous use, he considered them representative of “only the decadent stage at which great art lost its raison d’etre and degenerates to trifles” [18].) Paalen was critical of Canada’s colonial policies. Browne’s mother was as well, but her family’s lives were shaped by colonial culture. Edenshaw’s life within this context is a theme at the heart of the book. Browne shows Edenshaw as the contemporary man he was, successfully navigating the colonial forces that almost destroyed and still threatened his world. Paradoxically and without nostalgia, Edenshaw “kept old ideas alive by embracing the new” (20).

The three argillite platters portray the same episode in the creation of the Haida world. They illustrate a Haida story of Raven giving women their genitalia. Raven, half-human and carrying a spear, and his steersman, a bracket fungus, travel in a canoe toward a rock offshore to capture the tsaw (female genitalia) that lie upon it. Should Raven be successful in his endeavor, the power of tsaw will be released and the Haida Nation will be created. Raven had tried to capture the tsaw before, first with a Junco and then a Stellar’s Jay as his helmsman, but each time Raven and the birds were overcome with the power of the tsaw, that is, succumbed to violent orgasms and were unable to continue. Raven then animated a bracket fungus by drawing or painting a design on it, and Fungus Man was able to steady the canoe. Raven’s quest would then be successful and time – the progression of the generations – would begin.

Browne’s account is based on the version of the story, and the explanation of what is happening in it, by gid7ahl-gudsllay, lalaxaaygans, Terri-Lynn Williams-Davidson in the VAG’s Charles Edenshaw catalogue.[ii] Browne’s elaboration of the narrative draws out its complexity and many levels of meaning. His interpretations draw on many additional sources – quotations from William Blake and Jacques Derrida at the beginning of the book testify to Browne’s wide-ranging intellectual arsenal – but primacy is given to teachings from contemporary Haida that emphasize the continuing importance that the Xuuya Kaagang.ngas narrative holds in Haida thought. For Williams-Davidson, for example, there is an instructional purpose to the story: it “teaches respectful conduct of men to female sexuality” (85).

Along with interpretations of the platters’ iconography and symbolism, Browne manages with apparent effortlessness to include a review of relevant literature, original research, a critique of colonialism and the government’s assimilationist mechanisms (“a system of legally entrenched inequality and racism” [60]), a brief history of argillite carving, meditations on the nature of Raven and interconnections between the natural and supernatural worlds, an overview of Edenshaw’s life and times, details about the Indigenous art market, iconographical and formal analysis, other works by Edenshaw, and other methodologies that are no doubt applications of the aesthetic criteria that Browne usually applies to works of Western art. We learn about Edenshaw’s interaction with anthropologists and collectors; his Christianity; how he spent time at the canneries where his wife, Qwii.aang, Isabella, an accomplished weaver, did seasonal work; and, the death of many of their children and the relationship of those losses to the platters’ theme of human reproduction. We are encouraged to examine the form and meaning of Raven’s Killer Whale crest hat. We see that the figure under Raven’s canoe may represent Konankada, the Chief of the Undersea World. It is pointed out that the platters’ triangular compositions suggest the axis mundi connecting the realms of ocean, earth, and sky. Browne mulls the sequence of the platters: whether the move is toward naturalism, in which case the Chicago platter would be the last of the series, or toward complexity and character development, which would make the Dublin platter the most recent. All is based on a variety of sources including Emily Carr’s account of her 1912 trip to Haida Gwaii, Alan Hoover’s study of the three argillite platters in American Indian Art magazine, Robin Wright’s work on argillite carving and Haida carvers, Karen Duffek and Bill McLennan’s insightful publications on style, and the biography of Edenshaw’s daughter, Florence Davidson, as published by Margaret Blackman. The voices of contemporary Haida artists such as Edenshaw’s great-grandson guud san glans, Robert Davidson and Chief 7Idansuu, James Hart have equal weight throughout.

Because Browne is intrigued by the role and character of Fungus Man in the tableaux depicted on the platters, there is information about fungi in the book. In the forests of Haida Gwaii, Browne goes in search of the type of fungus that Raven turned into Fungus Man. On a forest walk a shift in perception reveals that while the bottom of the bracket fungus Ganoderma applanatum is white and smooth, the top is ribbed like a clam shell. This connects Fungus Man with another of the Raven creation stories: Raven discovering mankind in a clam shell, or cockle shell (as the linguistic basis for the English translation of the shell that held the nascent humans is considered) that is depicted on an argillite chest by Edenshaw in the Royal BC Museum and is the subject of Bill Reid’s Raven and the First Man in the UBC Museum of Anthropology. For Browne, these connections go beyond similarities of form and content. They indicate a way of understanding the world: “The ability to identify the ways in which one thing is analogous to another, or to its contrary, is at the heart of being – and all poetry and art – and will be critical to our survival” (112).

Browne is a documentary filmmaker and his reading of the argillite platters is cinematic. He notes that Raven and Fungus Man break the fourth wall, looking out at us and implicating us in their journey. What is depicted on the platters is not simply an engraved design. It is a drama that takes place in its own mythic time, which becomes our time. The book’s title, Entering Time, refers to the Haida story, but also to Browne’s own intellectual journey. By his passionate engagement and beautiful writing, he carries the reader along with him on that expedition – what Karen Duffek describes (on the back cover), as “an enthralling journey into time and history . . . across the realms of epic poem, oral narrative, science, art, and detective story.”

Much of the information and many of the interpretations in the book come from other sources. But Browne’s masterful drawing-together of those sources, his astute observations, creative speculations, and poetic writing combine to give a new perspective on three masterpieces of Haida art. There are informative notes and references and an extensive bibliography. All in a beautifully designed 21.5 x 12.5 cm book of less than 200 pages.

[i] Browne, Colin. Scavengers of Paradise, in Dawn Ades, ed., The Colour of My Dreams: The Surrealist Revolution in Art. (Vancouver: Vancouver Art Gallery and Douglas & McIntyre, 2011). Exhibition Catalogue.