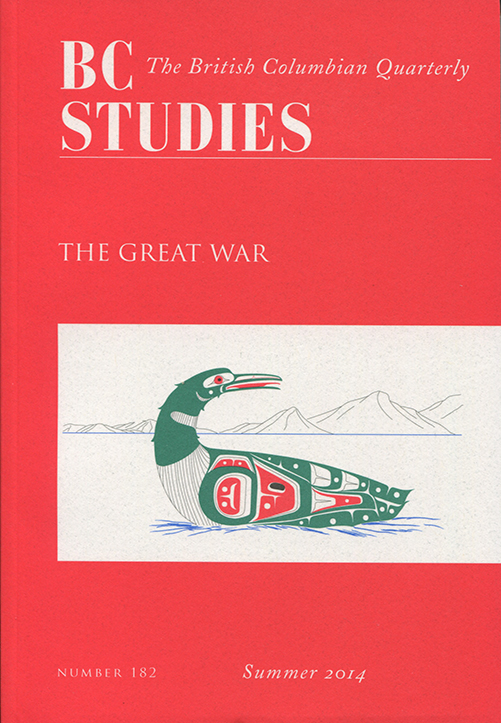 As we mark the 100th anniversary of the outbreak of the First World War, this issue of BC Studies examines the conflict’s impact on Canada’s “Pacific Province.” Though far removed from the fighting, British Columbia was forever changed by its experiences of the war of 1914-18. In this issue, readers will rediscover the First World War and its effect on British Columbia’s people, both soliders and civilians, as well as its politics, industries, poetry, and memory.

Uncovering the Enemy Within: British Columbians and the German Menace

A Militia History of the Occupation of the Vancouver Island Coalfields, August 1913 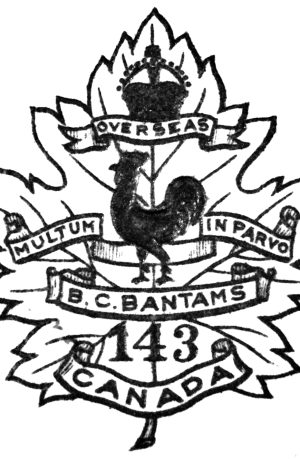 “Do Your Little Bit”: The 143rd Battalion Canadian Expeditionary Force, “BC Bantams”

BC Narratives of the Great War: Home, Home Away, Loss, and Hope

By James A. Wood

Raymond Collishaw and the Black Flight

Raymond Collishaw (1893-1976), a native of Nanaimo, began his career in uniform as a teenager with the Canadian Fisheries Protection Service. In 1915 Collishaw volunteered for the Royal Naval Air Service (RNAS). He qualified as...

Death or Deliverance: Canadian Courts Martial in the Great War

In the summer of 1919, newspapers in several communities in British Columbia printed special victory editions with honour rolls of soldiers and airmen who died or returned wounded from serving on the Western Front during...

Neta Gordon’s Catching the Torch: Contemporary Canadian Literary Responses to World War I is a firmly contemporary study of the notion of the Great War in modern memory: that is, the First World War’s imaginative...

Robert Ratcliffe Taylor’s study of the soldier-poets of the First World War is useful for scholarship and is approachable by a casual reader. Although the tone of this review must be critical, the utility and...

For King and Country: 150 Years of the Royal Westminster Regiment

The setting sun of the British Columbia flag provides a fitting background for the regimental colours of the Royal Westminster Regiment. Authorized in 1863 by Governor James Douglas as the New Westminster Volunteer Rifles, in...

The Artist in the Cloister: The Life and Works of Father Dunstan Massey

Art and Roman Catholicism have, for most of the church’s long history, gone hand in hand. And Roman Catholic churches, schools, and abbeys in British Columbia are no exception. During the first decades of the...

In the Shadow of the Great War: The Milligan and Hart Explorations of Northeastern British Columbia, 1913-14

Jay Sherwood has given us another chapter in the story of how the talented surveyors of the early twentieth century put vast areas of northern British Columbia on the map. The places visited by E.B....

By Robin and Jillian Ridington

The Second World War is fading from living memory, and military veterans of that conflict are now rare. Their average age is 87. Given this situation, the author and Danny Brown, a Campbell River Museum...

Secret Service: Political Policing in Canada From the Fenians to Fortress America

Secret Service is the first full-length narrative on security intelligence in Canada since Stan Horrall and Carl Betke’s 1978 official RCMP history, Canada’s Security Service: An Historical Outline, 1864-1966. This is a significant achievement for...

Kamala Elizabeth Nayar’s groundbreaking work, The Punjabis in British Columbia, represents a significant addition to a number of fields. At a basic level, it focuses on the important but sorely understudied community of Punjabis who...

Marjorie Too Afraid To Cry: A Home Child Experience

The Prince of Wales Fairbridge Farm School was located near Duncan, British Columbia. Between 1935 and 1950 it accommodated over three hundred underprivileged British children. Marjorie Arnison was one of them. She arrived at the...

For King and Kanata: Canadian Indians and the First World War

Exploring the participation of Canadian First Nations in the First World War, Timothy Winegard takes aim at two historiographical problems: the tendency to simply insert Aboriginal military contributions where they have been otherwise ignored, and...

One should always be skeptical of books when the title proclaims them to be the “true story” on any aspect of history. For truth, like beauty, is in the eye of the beholder. Tom Swanky’s...

Fishing the River of Time

Here is an entertaining addition to the shelf of books about Vancouver Island. Depending upon the reader’s own experiences in life, and the breadth of his interests, he may be amused by Taylor’s rambling memories...

Rewriting Marpole: The Path to Cultural Complexity in the Gulf of Georgia Region

Rewriting Marpole is the published version of Clark’s PhD dissertation (Clark, 2010) and an outgrowth of his MA thesis (Clark, 2000). The goal of his research “is to determine the spatial...

Finding Japan: Early Canadian Encounters with Asia depicts stories of Canadians who went to Japan, or whose lives, dreams, achievements, and failures were intimately connected to Japan. In contrast to the far more familiar experiences...

Landscapes and Social Transformations on the Northwest Coast: Colonial Encounters in the Fraser Valley

Landscapes and Social Transformations on the Northwest Coast is a significant addition to our understanding of colonialism, settler-Indigenous relations, and human-land relations in British Columbia. Jeff Oliver’s work is part of a growing trend that...

This book is part of the Canadian Government’s “Community Historical Recognition Program” (CHRP), a five-year effort to revisit uncomfortable moments in its past. It re-examines the experiences of so-called Italian enemy aliens during the Second...

The story of Greek mariner Juan de Fuca’s report to English merchant Michael Lok, in Venice in 1592, of the entrance to a waterway on the northwest coast of North America around the parallel 48ËšN...

This major interdisciplinary study shatters the illusion that only Europeans contributed to modern legal debate about the legitimacy of empire and nature of imperial sovereignty and colonial possession. The basic – twofold — premise of...

Where Happiness Dwells: A History of the Dane-zaa First Nations

“He expects the listener to be familiar with that part of the story, in the same way that Homer expected ancient Greeks to know about the Trojan horse and didn’t include it in The Iliad”...

David Stouck has written a remarkable history. More than a biography, it is an encompassing account of a remarkable figure in later modern Canadian and international cultural history. Stouck recovers the spirit and material record...

Historical redress is a touchy subject and should be handled with care. At root, it is a question about what to address. InJustice Served is funded by the vaguely termed “Community Historical Recognition Program” (CHRP),...

Cartographies of Violence: Japanese Canadian Women, Memory, and the Subjects of the Internment

In the second chapter of her powerful book, Mona Oikawa indicts the critical reception of well-known Japanese-Canadian representations of Internment. Readings of Muriel Kitagawa’s This is My Own, for example, have tended to “exceptionalize” it...

BC Studies no. 182 Summer 2014 | Bibliography of British Columbia

Chris Madsen is a Professor in the Department of Defence Studies at the Canadian Forces College and Royal Military College of Canada in Toronto, where he teaches senior and mid-rank military officers in the area of military operations and planning. During sabbatical leave 2014-2015, he is a visiting scholar in the Urban Studies Program at Simon Fraser University, contributing to a SSHRC community partnership project involving the City of New Westminster and the International Longshore and Warehouse Union Local 502. His research interests are naval procurement and logistics, shipbuilding, military law, and port activity on the Fraser River.

Peter Moogk is a Professor Emeritus of the UBC Department of History and is best known for his publications on the social history of early French Canada. His other interests encompass the history of currency, American Loyalists, and Canadian military history. He is currently the curator-archivist of the 15th Field Artillery Regiment, RCA, Museum in Vancouver and is working on an anthology of the lives of Loyalist descendants in British Columbia.

Wayne Norton is a British Columbian historian and author with a master’s degree in Canadian history from UBC (1988). He has written extensively on the history of Kamloops and Fernie. His most recent books are Kamloops History: Fictions, Facts and Fragments (Plateau Press, 2006) and Women on Ice: The Early Years of Women’s Hockey in Western Canada (Ronsdale Press, 2009). He is also author of an article on the neglected history of the World War One internment camp at Fernie /Morrissey. See “Communities Divided” in The Forgotten Side of the Border (Plateau Press, 1998). Wayne lives in Victoria.

Sandi (Sauer) Ratch received her master’s degree in Archaeology from Simon Fraser University in 1995. She currently lives in Wetaskiwin, Alberta, about 45 minutes south of Edmonton. Her part-time work includes research, writing, and graphics from her home office doing both heritage and archaeological consulting for various clients. “Do Your Little Bit” was the result of research spurred by a collection of historic postcards collected and kept by family. http://sandiratch.blogspot.ca/p/ historic-research-g.html.

Megan Robertson is a doctoral candidate in the School of Communication at Simon Fraser University. She completed her master’s degree at UBC in English Literature where her thesis focused on representations of the Great War in contemporary Canadian literature. Her current research interests include cultural memory, vernacular photography, and digital heritage.

Daniel Schade has earned undergraduate degrees in both history and political science at the University of Victoria and is currently a regular force officer in the Royal Canadian Air Force.

Jim Wood has taught at several post-secondary institutions, including Trent University, the Royal Military College of Canada, UBC Okanagan, and the University of Victoria. In addition to articles published in Canadian Military History, The Journal of Military History, The American Review of Canadian Studies, and BC Studies his book publications include We Move Only Forward: Canada, the United States, and the First Special Service Force, 1942-44 (2006) and Militia Myths: Ideas of the Canadian Citizen Soldier, 1896-1921 (UBC Press, 2010). He currently teaches history at Kwantlen Polytechnic University and Okanagan College.