Landscapes and Social Transformations on the Northwest Coast: Colonial Encounters in the Fraser Valley 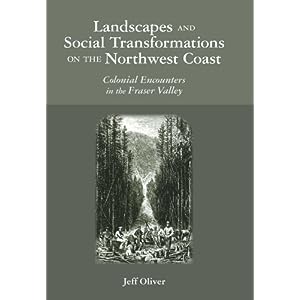 Landscapes and Social Transformations on the Northwest Coast is a significant addition to our understanding of colonialism, settler-Indigenous relations, and human-land relations in British Columbia. Jeff Oliver’s work is part of a growing trend that grants primacy to place in this historical process, and privileges the local over the broader brush strokes of the grand narrative. Oliver employs this sharp local focus to articulate “a view of the landscape that engages the social experiences of people living in the past, individuals as well as social groups,” and a perspective presenting “a more ambiguous and messy picture, exposing a canvas of false starts, interruptions, and uncertainty” (5). After setting the scene, the book begins in the immediate pre-contact era with a reconstruction of Indigenous relationships in the landscape of the Fraser Valley, and then Oliver tracks these relationships and settler conceptions of the land through to the early twentieth century. He examines much of this historical and geographical terrain through the lens of encounter while eschewing or unsettling the field’s common binaries: colonizer vs. colonised, core vs. periphery, hunter-gatherer vs. agriculturalist, amongst others.

Landscapes and Social Transformations is a highly intelligent and important monograph deserving of much praise. Oliver possesses the rare gifts of eloquence and economy of words, which enable him to produce, for all its conceptual complexity and temporal coverage, a book of just over 200 pages of text. More impressive, however, is the thoughtful and deft manner with which he takes the familiar tropes and more recent revisionist nuances of colonial history and complicates them with his ground level engagement with the Fraser Valley. It is not that Oliver rejects the value of the broader conceptual framework but, as he puts it, “attempting to read the permutations of place through such broad frames of reference can result in rather predictable plotlines, histories that homogenize patterns across time and space and reduce complex issues to black-and-white caricatures” (202). This insight is evident in his exploration of pre-contact Stó:lÅ interfaces with the landscapes of the Valley, which reveal a more complex and interventionist relationship that was “not as ecologically passive as perceived” (161). Significantly, Oliver provides the same thorough and sophisticated exploration of settler interrelationships with the land, a side of the exchange too often simplified within the broader linear trajectory of the grand narrative. Instead, Oliver finds a colonising population with diverse, and sometimes conflicting, values and relationships with the landscape they came to settle and transform. At the very local level, he notes, “where individuals went about the routine tasks of homesteading, concepts of progress and visions of a better future were sometimes difficult to grasp” (162). Even the landscape itself is problematised, with the usually unidirectional colonial transformation from wilderness to bucolic landscape unsettled when a wilderness re-colonised previously cleared spaces abandoned by failed or disillusioned newcomers.

Only in the last substantive chapter, which explores settler identity into the early twentieth century, is the evidence a little thin and the argument less persuasive, but this does not detract from a thoughtful and excellent work of scholarship.