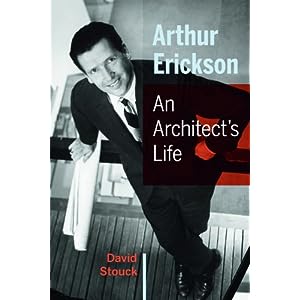 David Stouck has written a remarkable history. More than a biography, it is an encompassing account of a remarkable figure in later modern Canadian and international cultural history. Stouck recovers the spirit and material record of someone remarkable for qualities of personality and creativity as well as their ambivalence. Arthur Erickson became “Canada’s Greatest Architect,” in the words of another scholar of his life in design, Nicholas Olsberg, but also a veritable local urban myth in Canada’s Terminal City, Vancouver.

That Erickson mythology has tended to cast him as uniquely distinctive, overlooking both the broader burgeoning architectural culture of the West/Coast and the variability in his design growth and attainment. Setting aside deficiencies in structural detailing, Erickson did not exhibit his marked perception for the architectonic, particularly of site, until the latter part of his first decade in practice. Nor was Erickson so much an innovator of formal or aesthetic solution as an extraordinarily imaginative re-interpreter of historical and contemporary idiom and motif. Witness the brilliant alchemy of ancient Classical, Asian, and Aboriginal trabeation — the interplay of powerful vertical with horizontal structural members — for the Museum of Anthropology at the University of British Columbia. Similarly, the articulation of the Filberg House in Comox, the Robson Square Complex in Vancouver, and the Canadian Chancery in Washington D.C. derives from a wide genealogy of design but results in buildings that are original and distinctive for their variously appropriate lyricism, practical and symbolic functionalism, and material and intellectual substance. Erickson was thoroughly imbued with the ideals of the Modern Movement in architecture (not really the superficial Philip Johnson /Henry Hitchcock tag, the “International Style” [the early Modernists detested stylism]). Yet, in company with Le Corbusier and Mies van der Rohe, he was equally imbued with the “great game” of design, but not just the Classical tradition Sir Edwin Lutyens invoked by that phrase. Erickson learned modes of architectonic thinking rather than specific iconography from historical practice, and most especially with respect to formulation of architecture from environmental and cultural conditions. One entrancing example, entrancing because of its punning and unexpectedness, is the entirely Modernist yet completely Baroque staircase leading from the roadway entrance up to the main mall level at Simon Fraser University. This commission, won with Geoffrey Massey, established Erickson’s repute beyond the province and nation. Four photographs of that reconfiguring of the physical and pedagogical fabric of European and North American university education atop the unlikely acropolis of Burnaby Mountain appear in the photo insert that accompanies the book.

At first, the absence of illustrations in the text itself seems unfortunate. However, it facilitates a more intriguing elision of life-to-design time: we can look over the judicious selection of family and, more extensive, architectural photographs — several superb, by Simon Scott — as we traverse Erickson’s life experience. If the excellence of the architectural photographs creates a greater consistency of design quality, they also lend vivid force to the quality of Erickson’s finest work, ending with the Museum of Glass at Tacoma. A fitting climax, because it recalls Erickson’s poetic response to natural light and the aesthetic potentiality of glass; and to his related comprehension of the nature of natural wood but also of concrete. Rightly omitted are the rather less persuasive essays on Arabian architecture in the many un-built schemes for Iraq and Saudi Arabia and the several commissions where his participation was more nominal.

Stouck narrates those episodes with the same diligent but lively attention, thereby maintaining a balance between what can best be termed occurrence and achievement. The subtle sophistication of his recovery of the life of the architect is evident from early on. Take just two quotations from Part I: “He [Erickson] loved the attention and praise” (27) and, quoting his Japanese teacher, Mrs. Griffiths “He is a genius and a good man” (37). Stouck’s attention to detail within the record of memory and document manages never to be turgid. Instead, it allows the reader, preferably armed with the photo insert, to arrive at independent insight and understanding. Moreover, the many facets of the person and designer emerge with greater potency. By an alchemy of words, fitting to Erickson’s own alchemy of form and motif, we have a visceral sense of his elegant, perceptive, intelligently intellectual, and most engaging presence.

Thus Stouck has constructed a highly readable yet revealing recollection of life experience and lived achievement. He joins company with such commendable bio-historians of architects and artists as Robert Twombly and Jack Lindsay. And Stouck’s description of the documented and remembered goods and chattels of growing up and coming into full maturity parallel the animated yet probing teaching and lecturing of Erickson himself. The importance of these lesser-studied activities, together with the complexities of his private life, receive due attention. These form part of the interweaving of the ordinary with the distinctive, the intimate with contextual, the anecdotal with the significant, and, increasingly through the book, the experiential with the executive dimensions of creative practice. Stouck is particularly adept at balancing the plethora of incident with important flows in situation and accomplishment. Fundamental is his empathetic and eloquent evocation of the profoundly lyrical yet sensual weft and warp of Erickson’s individual and artistic being. That weaves through much of the twenty chapters and four sections of the book, parsed according to major phases or commissions. The process of sexual self-discovery coincided with the travel experience that alike moulded his architectural sensibility. In this manner, Stouck re-animates Erickson’s evolving personal nature in tandem with the development of his design thinking and practice. In so doing he does not neglect the sticky presence of financial reality or the politics of professional activity. An Architect’s Life will be a worthy companion to the already published and soon-to-be-published architectural monographs by, respectively, Olsberg and Castro, and Michelangelo Sabatino.

A reviewer has a duty to offer some matters for consideration. These will be few but bear upon the charting of Erickson’s place in temporal and critical space. His early career occurred in a more broadly creative environment than is acknowledged, even in this judicious bio-history. The quite rich vein of ideal and pragmatic Modernism being mined in post-Second War Vancouver was examined by this reviewer in The New Spirit: Modern Architecture in Vancouver 1938-1963 (Canadian Centre for Architecture, Douglas & McIntyre and M.I.T. Press, 1997). A markedly astute assessment of Erickson’s design genealogy and ability appears in Christopher Thomas, “Reconciling the Universal and the Particular: Arthur Erickson in the 1940s and 1950s,” Bulletin of the Society for the Study of Architecture in Canada 21 (June 1996), while Nicholas Olsberg composed a most discerning analysis of Erickson’s work in “Canada’s Greatest Architect,” published in Architecture and the Canadian Fabric (edited by R.W. Liscombe, UBC Press, 2011).

Stouck reminds us with discerning grace that history arises from lives that are affected by multiple occurrence, agency, and interest. He carries the reader beyond the somewhat tawdry controversy attending Erickson’s final years, beyond the diametrically opposed readings Stouck weaves into his Epilogue — Erickson the snobbish sybarite versus Erickson the ascetic aesthete — to the enduring, delightful, and deeply talented Living Architect.