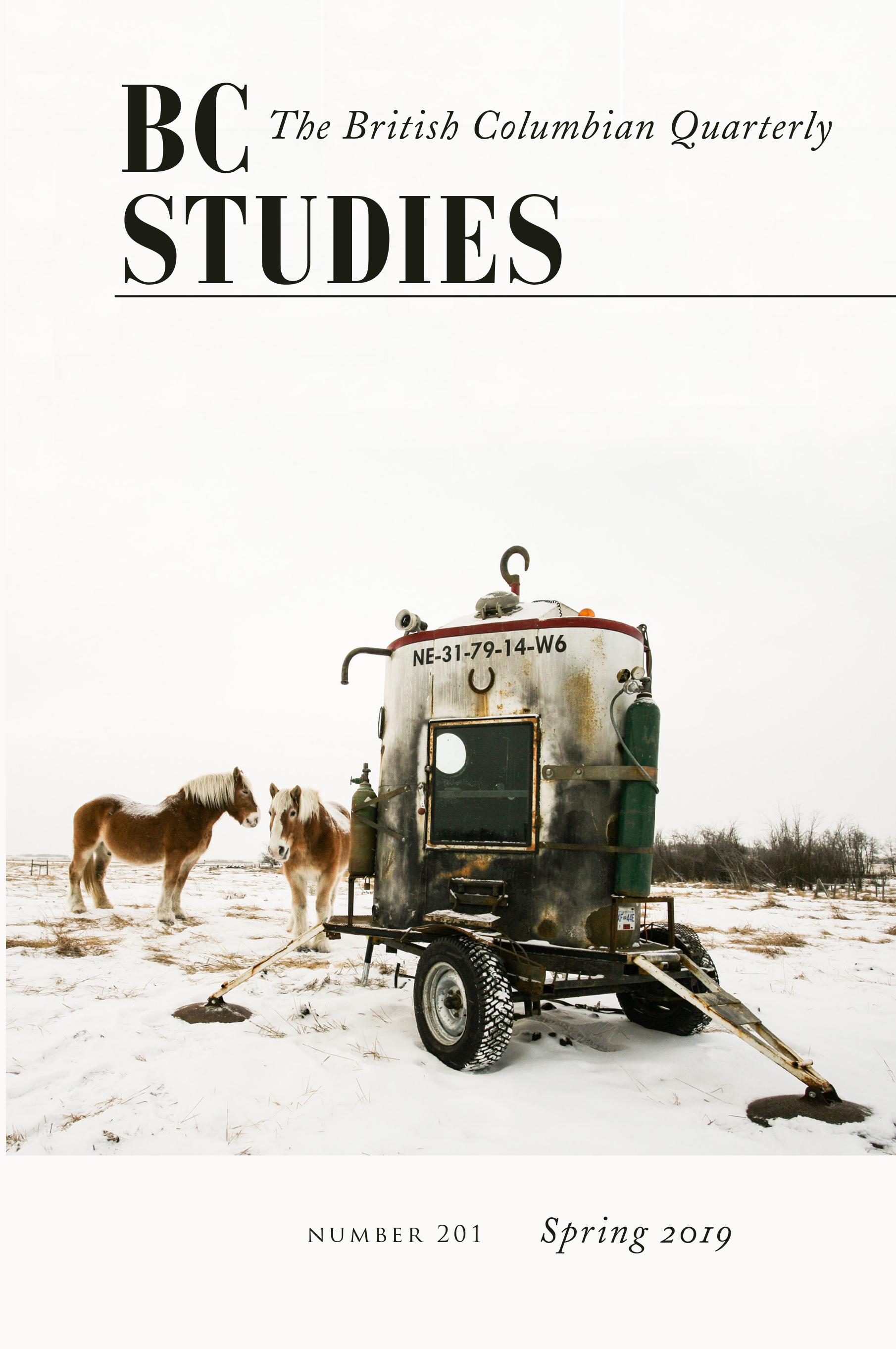 To read the full issue online, visit our OJS site

Economic Development of Interior British Columbia: A Case Study of Wages in the Okanagan, 1911-21

By Roger Sugden and Keith Sugden

“Many Families of Unseen Indians”: Trapline Registration and Understandings of Aboriginal Title in the BC-Yukon Borderlands

The Present of California May Prove … the Future of British Columbia

Fleecing the Lambs? The Founding and Early Years of the Vancouver Stock Exchange

A Canadian Jew in Berlin

A portion of an 1897 letter from Franz Boas to Kwagu’ł Chiefs, reproduced in English and Kwak’wala, opens The Story Box: Franz Boas, George Hunt and the Making of Anthropology, an exhibition on view...

What stays with you after watching Charles Wilkinson’s new documentary, Vancouver: No Fixed Address, is its beautiful cinematography. Vancouver’s ideal location at the intersection of the ocean, the mountains, and the sky is captured brilliantly: every shot...

Where it Hurts, by Sarah De Leeuw, is a collection of essays within the genre of creative non-fiction. The vivid essays express loss, trauma and humor. De Leeuw uses complex imagery that takes the reader...

Spying on Canadians: The Royal Canadian Mounted Police Security Service and the Origins of the Long Cold War

Spying on Canadians opens with the goal of adding “to the political demands for a new commitment for a transparency in national security appropriate to our purportedly democratic society.” (9) It is a principled point. Describing...

This collection of essays is an integral part of American-modelled activism to establish a collective scholarly field for Asian Canadians beyond national boundaries. Such trials, as the editors argue, have already been initiated, for example,...

Over the past two decades, community forestry has been adopted with growing frequency across Canada. Localities have sought to balance multiple values – economic, social, environmental – within systems of decentralized forest management. Contributors to Growing...

The 40th anniversary reprint of the original, classic study, Indian Fishing,has arrived. Its author is the multi-talented graphic artist, photographer, archeological fieldworker/ethnographer, and museum exhibit curator, the late Hilary Stewart. For only one of these many skills...

The name “Salish Sea” acknowledges the cultural and ecological connections between the Puget Sound, Strait of Georgia, and Strait of Juan de Fuca. The sea spans the US/Canada border and includes the homelands and homewaters...

Wayne Norton provides a fascinating story of a British Columbia resource town navigating its way through the tribulations of the Great War.  In so doing, he adds to the small but growing body of works that...

Aboriginal Peoples and the Law: A Critical Introduction

Jim Reynolds, a highly experienced Aboriginal rights lawyer, pursues two ambitious aims with his new book, Aboriginal Peoples and the Law: A Critical Introduction. One is to provide a succinct yet comprehensive overview of Canadian law...

The Miracle Mile: Stories of the 1954 British Empire and Commonwealth Games

The Miracle Mile written by Jason Beck, the curator at the BC Sports Hall of Fame and Museum, is a masterfully constructed narrative of the first truly international event in British Columbia sport history. The 1954...

Witness to Loss is a multi-authored study of wartime Japanese Canadian confinement that draws from the memoirs of Kishizo Kimura, a Japanese-born man who immigrated to Canada in 1911. Kimura had an important impact on the...

From Left to Right: Maternalism and Women’s Political Activism in Postwar Canada

In popular imagining, as World War II ended Canadian women were ushered back into their domestic, homemaking lives and their political voices were silenced until second-wave feminism emerged in the sixties. In the book, From Left...

Maker of Monsters: The Extraordinary Life of Beau Dick

The recent passing of Beau Dick makes this documentary film both a testament and an affirmation of an extraordinary life. More than a recitation of the chronology of his life, the filmmakers have created a...

At Sea with the Marine Birds of the Raincoast

Caroline Fox presents in the guise of an account of her experiences as a field biologist a wonderful memoir of coastal British Columbia.  Onboard the sailboat Achiever, her job was to survey birds from Vancouver Island to...

In the spring of 2018, hundreds of people gathered between city hall and the public library in downtown Bellingham, Washington, to witness the dedication of a 10-ton granite “Arch of Reconciliation,” a monument to and...

BC Studies no. 201 Spring 2019 | Bibliography of British Columbia

Christopher Green is a PhD candidate in art history at the Graduate Center, CUNY. His research focuses on modern and contemporary Native American art, the representation and display of Indigenous culture, and primitivisms of the historic and neo-avant-garde. His scholarly and critical writing can be found in Art in America, frieze, The Brooklyn Rail, ARTMargins, Winterthur Portfolio, and ab- Original, among others, and he co-edited issue 11 of SHIFT: Graduate Journal of Visual and Material Culture, “Blood and Earth and Soil.” He is a 2018–2019 Smithsonian Institution Predoctoral Fellow at the Smithsonian American Art Museum and National Museum of the American Indian, where he is conducting dissertation research on the interrelation of Euro-American modernism and Northwest Coast Native art.

Glenn Iceton is a PhD candidate in history at the University of Saskatchewan. His dissertation more broadly examines historical representations of Indigenous land use and how these representations shaped later debates surrounding Aboriginal title in the BC-Yukon borderlands.

Karl Mattson is a self-taught, multimedia artist. He was raised on the banks of a creek, as a fifth-generation farmer, and lives in South Peace Country. Mattson’s life has been fuelled by his compulsion to create and speak through art, which has always played a central role ifor him. Mattson’s current explorations include large metal sculpture, and in particular, scavenging scraps and materials that surround his farm and community, an area currently being enveloped by oil and gas industry. Through the creative process, Mattson has been able to use his artistic talent to protest against the environmental issues that plague his farm, his community, and his personal psyche.

Courteney Morin is nehiyaw from Treaty 6, Métis, and fourth-generation Dutch and Ukrainian. She grew up between amiskwaciy and her mama and papa’s ranch. Her work as a multidisciplinary artist focuses on representations of land and language through live visual performances, videography, animation, and computer programming. Morin is a member of the band nêhiyawak and studies virtual and augmented realities with Indigenous Matriarch 4. She is currently a First Nations and Indigenous Studies Undergraduate Student at UBC and aspires to continue her studies with a master’s degree concentrated in prison abolitionism. You can listen to her on CFWE-FM’s Conversational Cree.

Jay M. Perry is a graduate of the University of Evansville, Indiana University (Indianapolis), and Bowling Green State University. He currently serves as assistant vice-president for academic affairs and interim chief academic officer for the South Dakota Board of Regents.

Geoffrey Poitras is a professor of finance in the Beedie School of Business at Simon Fraser University. In addition to numerous journal articles on a wide range of subjects from financial history, applied econometrics, security analysis, and the use of derivative securities in financial risk management to business ethics and the opioid crisis, he is also the author of ten books, the most recent being Equity Capital: From Ancient Partnerships to Modern Exchange Traded Funds and Taxing the Wealthy: Globalization, Inequality and Capital Income. After completing a PhD (Economics) at Columbia University, he completed a four-year stint as a securities analyst with the Bank of Canada in Ottawa, where he served as Government of Canada treasury bill and bond auction manager, prior to joining SFU in 1989.

Keith Sugden (PhD History, MSc Applied Chemistry) is an affiliated researcher at the Cambridge Group for the History of Population and Social Structure, University of Cambridge, England. After a career in research and development in a worldwide consumer goods company, he changed tack to study economic history, particularly as it relates to occupations. He is interested in what people did, why they did it, and what were the outcomes. His main concerns are two-fold: to throw light on the English textile industry during the Industrial Revolution, circa 1500–1851, and to understand the economic development of the Okanagan, British Columbia, 1881–present day.

Roger Sugden is professor and dean at UBC’s Faculty of Management, and director of the Regional Socio-Economic Development Institute of Canada. He previously worked in the UK at the universities of Birmingham, Edinburgh, and Stirling, and in Germany at the Wissenschaftszentrum, Berlin. He has also been visiting professor at the Università degli Studi di Ferrara, Italy, and visiting scholar at the University of Cambridge, UK. His research is on economic organization, the interests of publics, and regional socio-economic development. He is currently working on the recent history of occupational structure and economic strategy in peripheral regions; the organization of knowledge and wine territory development; and the organization of contemporary university management education.