Maker of Monsters: The Extraordinary Life of Beau Dick

By LaTiesha Fazakas and Natalie Boll 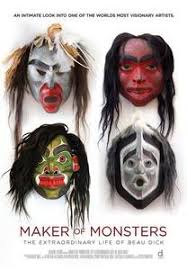 The recent passing of Beau Dick makes this documentary film both a testament and an affirmation of an extraordinary life. More than a recitation of the chronology of his life, the filmmakers have created a documentary that generously explores a “complicated individual.” Maker of Monsters: The Extraordinary Life of Beau Dickprovides the viewer with a very rare and intimate look into the life and relationships of a man who felt passionately about his art, his family, and his cultural and academic communities.

Dick was born in 1955 in the Kwakwaka’wakw community of Village Island on Kingcome Inlet. The interviews with fellow carvers, critics, curators, and collectors of contemporary art trace the meteoric trajectory of a talented artist. It was a career that coincided with the revitalization of Northwest art forms and the ceremonies for which they were produced.

The film begins with Dick relating the story of a how of a piece of wood came into his possession. The deep baritone and rhythmic cadence of his voice reveal a very adept and compelling storyteller. The tale he weaves provides the viewer with a small glimpse into the complexity of the artist, whose words are playful, manner is mischievous, and thoughts are profound. His laid back and easy manner is deceptive, and, like those interviewed, we are not sure if he is a “shaman, a con man, or an artist.”  Perhaps a trickster is a more appropriate description.

To use a phrase coined by Dana Claxton, artist and UBC colleague of Dick’s, this film is ultimately about the “ethics of care” and the impact one person and his art have had on those whose lives intersected with his. Every interview in the film reveals Dick’s generosity. The candor of Dick’s own reflections on his life provides a balance and prevents the film from becoming merely a celebratory portrayal of an iconic demigod. What becomes clear in this film is that Dick lived his life on his own terms. His passion for the environment was the same passion found in all aspects of his life. He is perhaps most well remembered for how he combined art and activism, which we witness when he broke coppers on the steps of British Columbia’s legislature and on Parliament Hill in Ottawa. These acts revitalized a Kwakwaka’wakw cultural practice of publicly shaming someone [another] into corrective and restorative behavior.  In this instance, it was a call for both [the provincial and federal] governments to reexamine their troubled relationships and responsibilities to Canada’s first people and those other-than-human beings [like the salmon] who are threatened by government policy and in/action.

Noticeably absent in this film is an acknowledgment of Dick’s most recent work, Under Sea Kingdom,created for Documenta 14. This body of work is perhaps one of Dick’s greatest legacies. While his artwork clearly expresses the culture [of place and origin] from where it originated, this series, showcased on the world stage, is indicative of Dick’s oeuvre: deeply grounded in Kwakwaka’wakw culture but reflecting a playfulness that also acknowledges we are living in dangerous times.