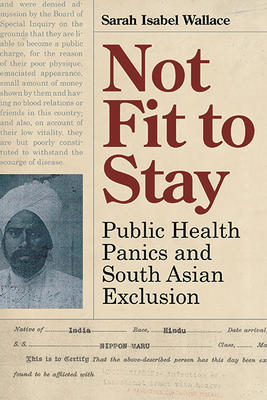 In the spring of 2018, hundreds of people gathered between city hall and the public library in downtown Bellingham, Washington, to witness the dedication of a 10-ton granite “Arch of Reconciliation,” a monument to and acknowledgment of three key moments of racial exclusion in 19thand 20thcentury northwestern Washington. The new arch groups together riots and organized expulsions of Chinese workers in 1885 and South Asian workers in 1907 with the incarceration of Japanese Americans in 1942. Sarah Isabel Wallace’s Not Fit to Stay also begins with the 1907 Bellingham expulsion and its reverberations in British Columbia. Like the new arch in Bellingham, this book wants to make the history of South Asian exclusion and expulsion part of the broader and perhaps still better-known history of anti-Asian discrimination, exclusion, and expulsion in the Canadian and American wests. Wallace tracks how South Asians “became medical scapegoats in Pacific coast communities” in the first two decades of the twentieth century, arguing that Americans and Canadians both used popular and expert perceptions of “Hindus” as inherently diseased to make exclusion a reality. (3)

The book examines an array of panics in newspapers, at medical inspection stations, and in parliamentary and congressional committees over the health problems supposedly posed by South Asians in North America, from plague to tuberculosis to hookworm. Wallace makes it abundantly clear that South Asians, like Chinese and Japanese immigrants, suffered specifically from the power of racialized medicine and coercive public health on the Pacific Coast as well as from general discrimination. She also argues that public and professional claims about the threats posed by diseased, unclean, and degenerate South Asians worked even better politically than similar arguments made about Chinese and Japanese immigrants, and were the key to legal exclusion by the 1920s. Many Americans and Canadians saw South Asians as marked by fundamental bodily difference and inferiority, like other Asians, but also as a distinct kind of health threat, one defined by “discourse on the new immigrants at the intersection of medicalized nativism, colonial theory, and orientalism.” (184) Wallace’s argument about both the distinctiveness and the special force of these public health panics is unconvincing, in part because the book, while referring to key works on immigration, race, and public health on the Pacific Coast, does not attempt a full-fledged comparison to the discourses on health surrounding other Asian immigrants. Wallace’s own meticulous research also shows how arguments for South Asians’ poor health or vulnerability to disease, while nearly omnipresent, often fell apart under any scrutiny; were abandoned in favor of arguments about labor market competition or generalized inability to assimilate; or simply served as potential backup when other arguments for exclusion might have failed.

In six compact and detailed chapters, Wallace manages to show how Canadians and Americans shared similar views on South Asian threats to public health and used overlapping strategies to limit and then end South Asian immigration to the West Coast. Wallace’s transnational and international approach is a strength of the book, as is her careful tracking of how medical experts, politicians, and labor leaders used and shaped evolving ideas of racial difference to push against both South Asian immigration, and, in the final chapter, South Asian claims to citizenship on both sides of the border. Not Fit to Stay ends by recounting stories of reconciliation and public apology for South Asian exclusion, but also with a timely reminder of the difficulties Sri Lankans have faced entering Canada in recent years.