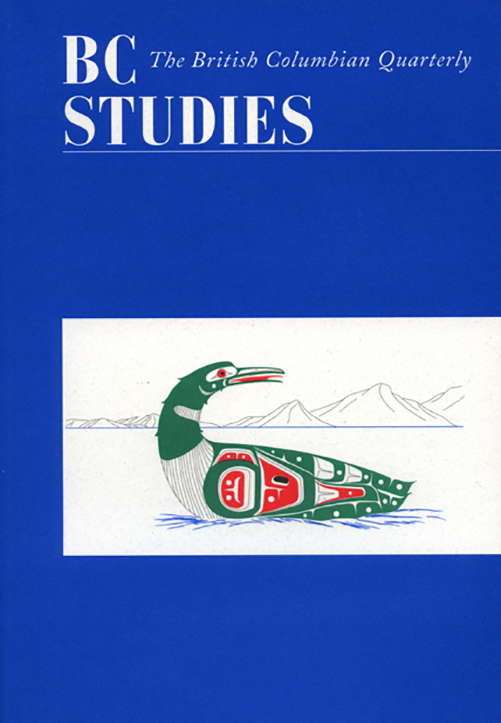 The articles in this issue touch down variously in Creston Flats in the East Kootenay; in the Treaty 8 Territory of the Fort Nelson First Nation; in Vancouver, Victoria, and Prince George; and in the aptly named False Creek near the heart of the provincial metropolis. Compounding the variety and emphasizing the diversity of this vast province, our review essay features books set in South Langley in the Fraser Valley, Boswell on the east shore of Kootenay Lake, and Ginty Creek south of Anahim Lake in the West Chilcotin. We have the province covered from its northeastern to its southern corners, east and west; from the boreal forest to the temperate south coast; from the Peace River to the Kootenay River; and institutionally from the Northern Rockies Regional Municipality to the False Creek Residents Association. Our authors also represent a tangle of disciplines, from history, through environmental studies, Indigenous governance, law, and business to psychiatry, psychology, and public health.

Regional patterns of substance use in the homeless in British Columbia

Dikes, Ducks, and Dams: Environmental Change and the Politics of Reclamation at Creston Flats, 1882-2014

The Long Question of Food and Land

Lives Lived West of the Divide: A Biographical Dictionary of Fur Traders Working West of the Rockies, 1793-1858 Volumes 1-3

Contours of a People: Metis Family, Mobility, and History

Frontier Cowboys and the Great Divide: Early Ranching in BC and Alberta

The Canadian Rangers: A Living History

Echoes Across Seymour: A History of North Vancouver’s Eastern Communities Including Dollarton and Deep Cove

The Left in British Columbia: A History of Struggle

Chinookan Peoples of the Lower Columbia

The Oil Man and the Sea: Navigating the Northern Gateway

Anne Dance is a History Postdoctoral Fellow at Memorial University of Newfoundland where she is currently researching the remediation of northern mines in Canada. She is also completing a comparative history of the Athabasca oil sands and the Sydney tar ponds.

Kate Garvie completed her master’s degree at the School of Environmental Studies at the University of Victoria in 2013. Her research on shale gas development in British Columbia was conducted in collaboration with the Fort Nelson First Nation. She is currently an organic farmer in Ontario.

Kerry Jang was elected to Vancouver City Council in 2008 and re- elected in 2011. Councillor Jang is a Professor of Psychiatry at UBC, where he teaches and conducts research on the causes of mental illness. Over the past three years he spearheaded the development of the city’s first-ever mental health addictions plan, a strategy for helping survival of sex-trade workers, and the use of modular affordable housing to help people who are homeless. Councillor Jang recently completed his term with the Mental Health Commission of Canada, where he was appointed to the Mental Health and Law Advisory Committee.

Michael Krausz is a Professor of Psychiatry, Epidemiology and Public Health at the University of British Columbia and the LEEF Chair in Addiction Research. Dr. Krausz is also a senior scientist at the Centre for Health Evaluation and Outcome Sciences. Dr. Krausz’s research focuses on the comorbidity of severe mental illness and addiction, and more recently, e-Mental Health. Isabelle A. Linden completed her Master of Public Health at the University of Sheffield, and has previously published on the topic of substance use, trauma, and homelessness.

Lana Lowe had been the Director of the Fort Nelson First Nation Lands Department since 2009 and holds an undergraduate degree in Geography and a master’s degree in Indigenous Governance from the University of Victoria. Lana has worked with Indigenous organizations in North and Central America, including the Union of BC Indian Chiefs and the Nahual Foundation in Guatemala. Lana is a proud member of the Fort Nelson First Nation.

Marissa Mar received her BA in Honours Psychology at the University of British Columbia and is currently completing her Master of Health Administration. Her main interests are in health care quality improvement and program evaluation.

Sarah McCalla is a recent graduate of UBC’s Faculty of Law. She is currently clerking with the BC Supreme Court and will be articling with Bull, Housser & Tupper LLP
.
James Murton teaches history at Nipissing University, North Bay, Ontario. His current research is on the development of food systems in Canada prior to the Second World War focusing on the development of apples as a global commodity and the role of subsistence production and local markets in the Annapolis Valley, Okanagan, and Niagara regions. He is the author of “John Bull and Sons: The Empire Marketing Board and the Creation of an Imperial Food System,” in Franca Iacovetta et al., Edible Histories: Towards a Canadian Food History (Toronto: University of Toronto Press, 2012).

Christian Schutz is an Associate Professor at the University of British Columbia and a practicing psychiatrist, psychotherapist, addiction physician, and medical manager at the Burnaby Centre for Mental Health and Addiction, a 100 bed tertiary inpatient centre focused on treating individuals with severe complex concurrent disorders. He is also Section Chair in Addictions Psychiatry for the Canadian Psychiatric Association. His focus is on treatment development and on understanding mechanisms of relapse and impulsive decision making in addiction and concurrent disorders.

Karena Shaw is Associate Professor and Director of the School of Environmental Studies at the University of Victoria. Although her roots are in political theory – Indigeneity and Political Theory (Routledge, 2008) – her recent research has focused on the political ecology of energy system transformation under conditions of climate change.

Greg Werker is a lecturer at the Sauder School of Business at the University of British Columbia and a scientist at the Centre for Health Evaluation and Outcome Sciences. His research includes analytical models of systems within health care with a focus on populations with complex concurrent disorders.