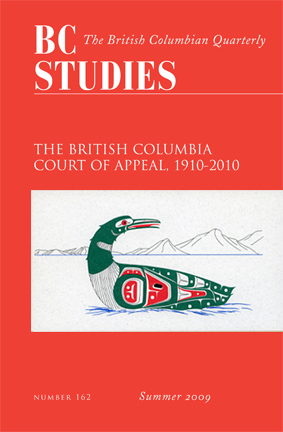 OUT OF STOCK Guest edited by John McLaren, Hamar Foster, and Wes Pue, this issue looks at the BC Court of Appeal, which turns 100 in 2010. The Court is a central institution in the history, constitution, and public life of the province and the centenary provides an opportunity for critically engaged scholarly assessments of its role and that of the judiciary overall.  These are matters of profound importance to British Columbia, if only because so many themes in British Columbia Studies (colonialism, aboriginality, labour, race, immigration, gender, environment, etc.) have found their way to the court and been refracted through the Courts’ lenses.’

“Everybody knows what a picket line means”: Picketing before the British Columbia Court of Appeal

A Court Between: Aboriginal and Treaty Rights in the British Columbia Court of Appeal

The BC Court of Appeal and Civil Liberties

“Everybody knows what a picket line means”: Picketing before the British Columbia Court of Appeal

Wrestling with Punishment: The Role of the BC Court of Appeal in the Law of Sentencing

For the Better Administration of Justice:The Court of Appeal for British Columbia, 1910-2010

For much of his life, Richard Wagamese has searched for a sense of belonging and struggled to find his identity as an indigenous person living in Canada. In One Native Life, Wagamese shares an intimate...

Writing the West Coast: In Love with Place

In the two generations since the first postmodern attempts to create a pan-cultural literature of place on the Pacific Coast, the context of landscape writing in British Columbia has been radically transformed. The environmental movement...

Race and the City approaches racism, politics, and space through a comparative case study of two umbrella ethno-cultural community organizations, one in Toronto and one in Los Angeles. Drawing from interviews with key individuals employed...

In 1998, Patricia E. Roy reviewed several books in which Chinese- and Japanese-Canadians combined archival projects and oral history to tell “their own history.” She praised these “active voices” but called for more research on...

The Ker Family of Victoria, 1859- 1976: Pioneer Industrialists in Western Canada

Approached by David Nation Ker to document the history of his family in British Columbia since Robert Ker’s arrival in 1859, John Adams has produced an engaging narrative, principally focused on the lives and careers...

Prostitution is a complex and politically charged issue that defies simple analysis. Daniel Francis’s new book documents attempts to regulate the sex industry in Vancouver, a city where the subject has occupied a central place...

In August 2003, the Okanagan Mountain Park fire southeast of Kelowna destroyed or damaged the Myra Canyon trestles, eighteen railroad structures, and the roadbed between them. This 5.5-mile (8.9-km) elevated path around a mountainous amphitheatre...

Spirit in the Grass: The Cariboo Chilcotin’s Forgotten Landscape

It is said that, in the old days, you could hear the commotion at Becher’s place as soon as your horse crested the rim of the Prairie. The old stopping house and saloon are gone...

Evergreen Playland is the dvd version of the movie of the same name that was part of the exhibition “Free Spirits: Stories of You, Me and BC,” held at the Royal British Columbia Museum (RBCM) in...

The audience for The Politics of Voting is likely an informed public that is grappling with the arguments for and against electoral reform in Canada. In this book, Dennis Pilon has two goals, each of...

Me Sexy: An Exploration of Native Sex and Sexuality

Is Cree a sexy language? Do indigenous people have less pubic hair than settler people? How are love, sex, and decolonization intimately related? These questions, and many more, are examined by the wide selection of...

Benjamin L. Berger is an Associate Professor of Law at the University of Victoria. His principal areas of teaching and research are criminal and constitutional law and theory, law and religion, and the law of evidence. A member of the editorial board of the Canadian Journal of Law and Society, he is co-editor of The Grand Experiment: Law and Legal Culture in British Settler Societies (UBC Press, 2008) and his recent publications include “A Due Measure of Fear in Criminal Judgment” Supreme Court Law Review 41 (2008) (2d) 161-192, and “The Cultural Limits of Legal Tolerance” Canadian Journal of Law and Jurisprudence 21:2 (2008) 245-277.

Gerry Ferguson, University of Victoria Distinguished Professor, Faculty of Law, is a specialist in criminal law and sentencing. He is a member of the Editorial Board of the Canadian Criminal Law Review, author of “Control of the Insane in British Columbia, 1849-1878: Care, Cure or Confinement?” in Regulating Lives: Historical Essays on the State, Society, the Individual, and the Law, eds. J. McLaren, R. Menzies, and D. Chunn (UBC Press, 2002), and co-author of Annual Review of Criminal Law and Canadian Criminal Jury Instructions.

Hamar Foster is a Professor of Law at the University of Victoria. He currently teaches Property Law, the Law of Evidence, Legal History and Aboriginal Law. His primary research interest is the legal history of Aboriginal/non-Aboriginal relations in British Columbia.
Judy Fudge is Professor and Lansdowne Chair in Law at the University of Victoria Faculty of Law. She has written extensively about the history of labour law in Canada, and specifically about the legal regulation of women’s work. Together with Eric Tucker she published Labour Before the Law: The Legal Regulation of Workers’ Collective Action 1900 to 1948.

Douglas C. Harris is an Associate Professor and Associate Dean Graduate Studies and Research in the Faculty of Law at the University of British Columbia. He is the author of two books on the fisheries – Fish, Law, and Colonialism: The Legal Capture of Salmon in British Columbia (2001) and Landing Native Fisheries: Indian Reserves and Fishing Rights in British Columbia, 1849-1925 (2008) – and is currently working on a study that uses Vancouver’s False Creek and the neighbourhoods around it to explore the role of property law in the construction of the city.

Ross Lambertson teaches Political Science at Camosun College in Victoria. He has written several articles about the history of human rights and civil liberties in Canada, and is also the author of Repression and Resistance: Canadian Human Rights Activists, 1930-1960 (Toronto: University of Toronto Press, 2005).

John McLaren is Professor Emeritus of Law at the University of Victoria. He researches in the areas of Canadian and comparative colonial legal history. He is currently working on a book on judicial tenure and accountability in the nineteenth century British Empire through the stories of colonial judges who were removed or threatened with removal from office.

W. Wesley Pue is Professor of Law at the University of British Columbia. His research interests are in the fields of policing, security and the rule of law and the history of the legal profession in Britain, Canada, and in comparative colonial perspective.

Janis Sarra is Professor of Law, University of British Columbia Faculty of Law, and Director of the National Centre for Business Law. She researches and writes in the areas of corporate law and corporate finance, securities law and commercial insolvency law.

Eric Tucker is a professor at Osgoode Hall Law School, York University. His research primarily focuses on the history and current development of labour and employment law. He is the author of Administering Danger in the Workplace (1990) and co-author of Labour before the Law (2001, with Judy Fudge) and Self-Employed Workers Organize (2005, with Cynthia Cranford, Judy Fudge and Leah Vosko). He is also the editorof Working Disasters: The Politics of Recognition and Response (2006).