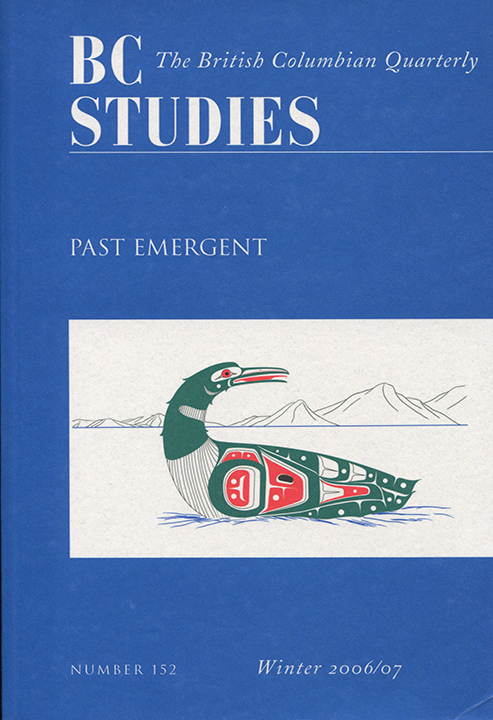 This issue brings together articles that consider how we understand and represent the past in the present and the significant consequences for Native communities and Native-settler relations.

“Who Were These Mysterious People?”: ‘cesna:m, the Marpole Midden, and the Dispossession of Aboriginal Lands in British Columbia

Collaborations on the Periphery: The Wolcott-Sewid Potlatch Controversy

The Enigma of Emily Carr

T’ekilakw and Wuxwuthin: Or, How We Got the Northwest Coast’s “Wilderness” So Wrong

In this book, Jean Barman and Bruce Watson tell a remarkable and little-known story – that of the many hundreds of Hawaiian Islanders who, for more than a century, came to work in the Pacific...

In the last half of the nineteenth century and the first half of the twentieth century, intimate relationships between indigenous women and settler men were freighted with a complicated and at times conflicting set of...

This is a book about why something did not happen. It is not quite counter-factual history, but it is an approach that works to remind us that nothing is inevitable. In the postwar Northwest, nothing,...

Jennifer Kramer’s book describes some recent negotiations of public representation and the incipient construction of national identity through the disposition of works of art by the Nuxalk people of Bella Coola, British Columbia. This book...

Maps of Experience: The Anchoring of Land to Story in Secwepemc Discourse

Presented as a discourse-centred approach to understanding landstory relations in Secwepemc experience, Maps of Experience provides candid and powerful insights into contemporary First Nations experiences. The book establishes a place for itself in the remarkable...

Keeping it Living: Traditions of Plant Use and Cultivation in the Northwest Coast of North America

This book is a product of the first Family History Writing Workshop sponsored by the Chinese Canadian Historical Society of British Columbia to encourage and facilitate the tracing of Chinese Canadian collective history, which has...

No postwar Canadian architect is as widely known as is Arthur Erickson. Some commentators refer to him as an architectural star and a Canadian icon. Still others argue that, while many in this country revere...

This edited volume, which consists of sixteen chapters plus two fore words, a preface, and a conclusion, has twenty-nine contributors. Its focus is the Parks Canada Gwaii Haanas Archaeology and Paleoecology project, which reports primarily...

The Many Faces of Edward Sherriff Curtis: Portraits and Stories from Native North America

I must declare an “interest” in this book. Its pictorial dimension consists of reproductions of superb sepia prints made from original glass negatives sold to the Capital Group Foundation by James Graybill, grandson of their...

Melissa Meyer, from the Tsimshian Nation, Lax Kw’alaams/Port Simpson, BC, is a University of British Columbia graduate in Fine Arts, a traditional weaver, and a Psychology of Vision trainer. She was still weaving Chilkat and raven’s tail, and doing all the traditional dying herself, when she assisted Susan Neylan with interviews at Lax Kw’alaams/Port Simpson in 2003.

Susan Neylan, a specialist in vernacular Christianity among the Tsimshian of northern British Columbia, is an Associate Professor of History at Wilfrid Laurier University. She holds a doctoral degree in history from the University of British Columbia. Dr. Neylan has published papers in Histoire sociale/Social History, Journal of the Canadian Historical Association, and Historical Papers of the Canadian Society of Church History, and is author of “The Heavens are Changing”: Nineteenth-Century Protestant Missions and Tsimshian Christianity(McGill-Queen’s University Press, 2003).

Dianne Newell is a Professor of History and Director of the Peter Wall Institute for Advanced Studies at the University of British Columbia. A specialist in the socio-econmic history of technology, she has published extensively on Canada’s Pacific coast fisheries, including: Tangled Webs of History: Indians and the Law in Canada’s Pacific Coast Fisheries (U. of Toronto Press, 1993). She has published one other collaborative essay with Dorothee Schreiber, “Why Spend a Lot of Time Dwelling on the Past?: Understanding Resistance to Contemporary Salmon Farming in Kwakwaka’wakw Territory,” in Arif Dirlik, ed., Pedagogies of the Global: Knowledge in the Human Interest.

Dorothee Schreiber is a post-doctoral fellow in the Department of Anthropology at McGill University. Her current research deals with Native-settler conflicts over natural resources, and the colonial administration of Native fisheries.