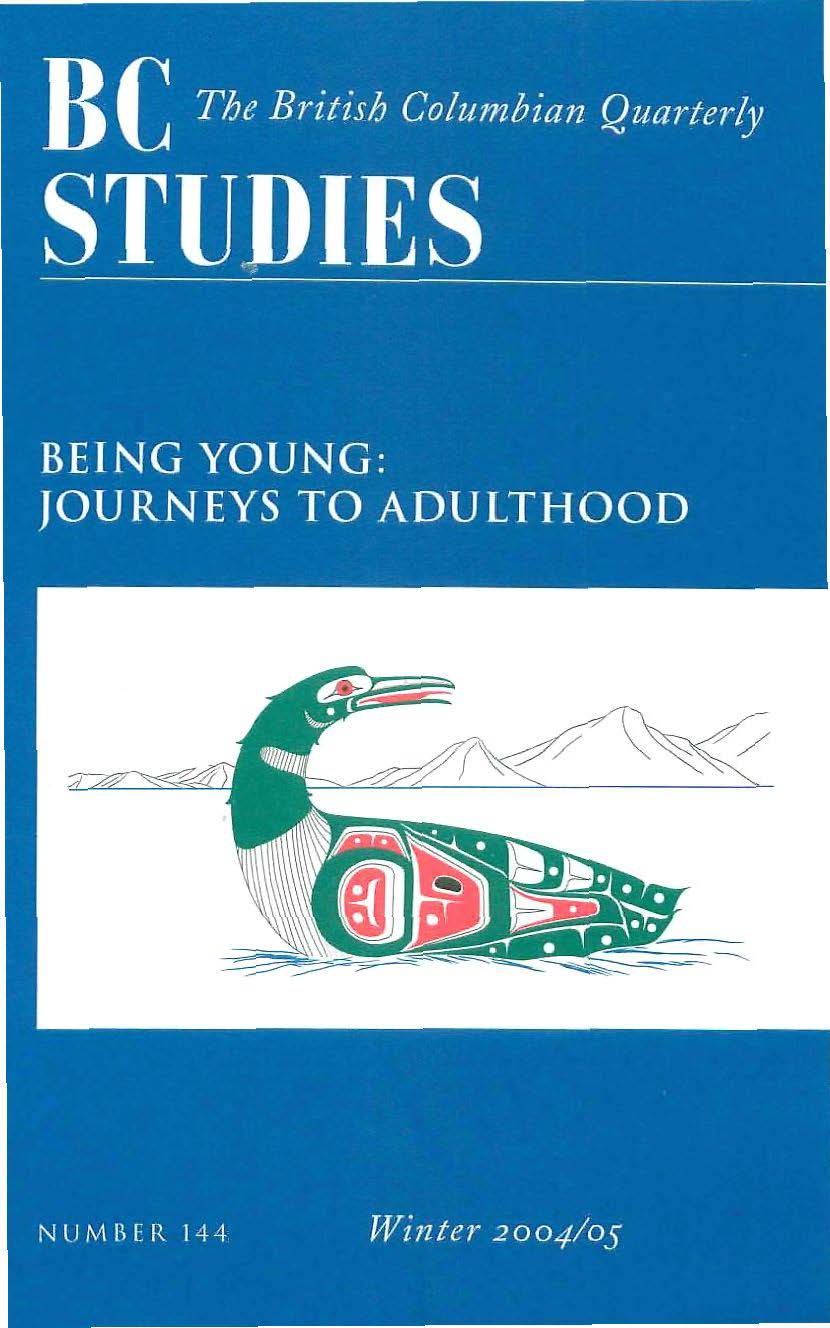 Being Young: Journeys to Adulthood

The Winter 2004/05 issue features articles on children and education in nineteenth- and twentieth-century British Columbia.

Educating the Eye, Hand and Heart at St. Ann’s Academy : A Case Study of Art Education for Girls in Nineteenth-Century Victoria

“It Was Two Different Times of the Day, But in the Same Place” : Coast Salish High School Experience in the 1970s

Interrupted Relations: The Adoption of Children in Twentieth-Century British Columbia

Breaking the ‘Silence’: A Review of Tong: The Story of Tong Louie, Vancouver’s Quiet Titan

THIS BOOK is a biography of Tong Louie, a second-generation Chinese Canadian businessman whose name, for several decades, has been tied to two of the most well known retail chains in western Canada — IGA...

Paddling Her Own Canoe: The Times and Texts of Pauline Johnson (Tekahionwake)

POET, WRITER, storyteller, spokesperson, performer, actress, performance artist. Pauline Johnson is certainly the most public and popular writer that nineteenth-century Canada produced, and perhaps even the most public Canadian writer of the last century. Such...

Academic Freedom and the Inclusive University

THIS BOOK SUCCEEDS in exemplifying what it fails to define. It contains seventeen chapters written by academics from the United States and Canada – academics who occupy a variety of positions: college teacher, university administrator,...

IN HER RECENTLY published ethnographic case study of the Cariboo-Chilcotin area, anthropologist Elizabeth Furniss describes what she calls the “frontier cultural complex” or the Canadian version of Frederick Turner Jackson’s American “frontier thesis.”1 The ideology...

IN 1858 TENS OF thousands of non-Native goldseekers rushed to the Fraser River in search of gold, a substantial number of them being American citizens who paid little heed to British sovereignty in the region....

Edenbank: The Story of a Canadian Pioneer Farm

ALLEN WELLS, who came west from Upper Canada for the gold rush, stayed to farm, establishing Edenbank, one of the earliest and largest farms in the Chilliwack Valley. As new settlers arrived, he encouraged “the...

YOU WON’T FIND many kids like Don Morgan these days. The plucky protagonist of this reissued children’s novel is a sixteen-year-old who hunts avidly, builds a waterwheel-driven pump to supply the farmhouse with water, and dreams of...

NANAIMO is A blue-collar community, but lately it’s been wearing a tie. Traditionally a tough-guy town, Nanaimo is projecting a kinder image to the world. The erstwhile Hub City (so-called because of the radial pattern...

A Voyage to the North West Side of America: The Journals of James Colnett, 1786-89

JAMES COLNETT will always remain a name of notoriety in world history for it is he who responded to Commandant Esteban Martinez’s demands and formalities at Nootka Sound in 1789 and started, so it is...

Reserve Memories: The Power of the Past in a Chilcotin Community

THE CURRENT POLITICAL climate in British Columbia is one that seeks to resolve Aboriginal legal entitlements and treaty rights through verification of precolonial practices and residency. Since 2000, when the so-called modern-day treaty process was...

Building Community in an Instant Town: A Social Geography of Mackenzie and Tumbler Ridge, British Columbia

BRITISH COLUMBIA’S single-industry communities that lie outside the province’s heartland of the Lower Mainland and southern Vancouver Island have experienced a dreadful pummelling over the last quarter century. Because of technological change, alterations in labour...

OUR KNOWLEDGE of the history of architecture in British Columbia has taken a quantum leap forward with the publication of Building the West. This remarkable reference work is a collaborative effort involving no fewer than...

When Coal Was King: Ladysmith in the Coal-Mining Industry on Vancouver Island

WHEN COAL WAS KING, Ladysmith was a small, undistinguished pit-town, one of thousands around the industrializingworld. On the eve of the Great War, Ladysmith’s population barely passed 3,200. Compared with Nanaimo or Cumberland, let alone...

Invisible Indigenes: The Politics of Non-recognition

A TEXT THAT PURPORTS to examine the experiences of indigenous peoples on a global scale is by definition ambitious and, thus, open to a variety of critiques. These works tend to sacrifice detailed analysis in favour...

Emerging from the Mist: Studies in Northwest Coast Culture History

LAND OF PROMISE is a compilation of of the letters of Robert Burnaby to his family in England. These letters were written between 1858 (the first year of the Fraser River gold rush) and 1863, while...

IN THEIR INTRODUCTION to this collection of poetry and prose by E. Pauline Johnson, the editors, Carole Gerson and Veronica Strong-Boag, reference their previous biography Paddling Her Own Canoe: The Times and Texts of E....

Interrupted Relations: The Adoption of Children in Twentieth-Century British Columbia

F. Graeme Chalmers is a professor in the Department of Curriculum Studies at the University of British Columbia. He is the author of three books and numerous articles on various aspects of art education.

Nic Clarke is a doctoral student of history at the University of Ottawa. He would like to thank Robert McDonald, Chad Gaffield (and other research group members at the University of Ottawa), Leslie Paris, Veronica Strong-Boag, and the readers for their advice and assistance with earlier drafts of this paper. Nic would also like to extend special thanks to his wife, Marcia George.

Michael Marker is an associate professor in the Department of Educational Studies and the Director of Ts”kel First Nations Graduate Studies. His recent publications include articles on Indigenous voice and transformation in Qualitative Studies in Education and the Canadian Journal of Native Education and a chapter in Student Affairs: Experiencing Higher Education (2004).

Veronica Stong-Boag is a professor in the Department of Educational Studies and the Women’s Studies Programs at the University of British Columbia where she teaches courses on the history of women, children, and childhood. She is presently working on two books, one on the history of adoption in Canada and the other on the history of Canadian children. She has written about the Mohawk-English Canadian writer and performer, E. Pauline Johnson (Tekahionwake), the suffragist Nellie L. McClung, Canadian women in the 1920 and 1930s, women’s paid and unpaid labour, and early Canadian women doctors.