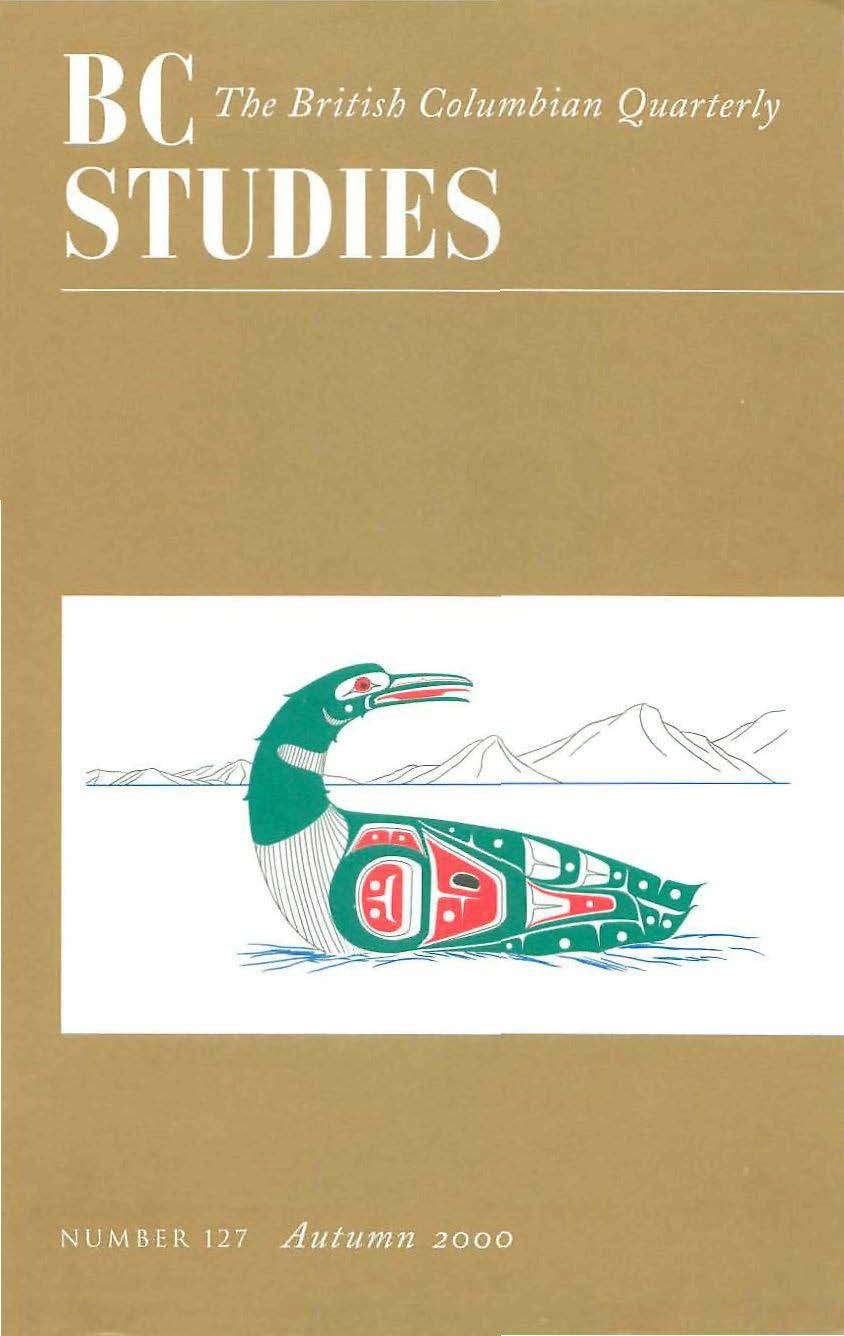 Excavating the Future in Cascadia: Geoeconomics and the Imagined Geographies of a Cross-Border Region

A Sense of Place: The Local in British Columbia History

The Silent Debate: Asian Immigration and Racism in Canada

A Young Man’s Benefit: The Independent Order of Odd Fellows and Sickness Insurance in the United States and Canada, 1860-1929

Smelter Smoke in North America: The Politics of Transborder Pollution

The Forgotten Side of the Border: British Columbia’s Elk Valley and Crowsnest Pass

Companions of the Peace: Diaries and Letters of Monica Storrs, 1931-1939

Passage to Juneau: A Sea and Its Meanings

Homeplace: The Making of the Canadian Dwelling over Three Centuries

BC Studies no. 127 Autumn 2000 | Bibliography of British Columbia

Stephanie Bolster’s second poetry collection, Two Bowls of Milk (McClelland and Stewart, 1999) won the Archibald Lampman Award. Her first, White Stone: The Alice Poems (Signal, 1998) received the Governor General’s Award. A native of Vancouver and a graduate of the MFA program in Creative Writing at UBC, she is now assistant professor in the Department of English at Concordia University.

Matthew Evenden is an assistant professor in the Department of Geography at the University of British Columbia. His recently completed PhD thesis is entitled, “Fish vs. Power: Remaking Salmon, Science, and Society on the Fraser River, 1900-1960” (York University, 2000).

Robert Irwin is assistant professor of history and the Assistant Director of Northern Studies at the University of Alaska Fairbanks.

Arthur J. Ray, a professor in the Department of History at the University of British Columbia, teaches and does research in the area of First Nations economic history and has been involved as an expert witness in numerous Aboriginal and treaty rights cases across Canada. He is the author of I Have Lived Here Since the World Began: An Illustrated History of Canada’s Native People (Toronto: Key Porter & Lester, 1996).

Chad Reimer is a member of the History Department at the Univesity College of the Fraser Valley. Recent and forthcoming publications include contributions to the Encyclopedia of Historians and Historical Writings, Dictionary of Canadian Biogaphy, and the anthology On Brotherly Terms: Canadian-American Relations West of the Rockies.

Laisha Rosnau writes in and around Vancouver, BC. Her work has appeared (or is forthcoming) in Canadian Literature, Event, Ontario Review, Stand Magazine, and The Greenboathouse Reader: An Anthology of Okanagan Writing. She is currently the executive editor of prism international.

Matthew Sparke is an assistant professor in Geography and the Jackson School of International Studies at the University of Washington. His book, Negotiating Nation-States: North American Geographies of Culture and Capitalism, is forthcoming from the University of Minnesota Press. He can be contacted at sparke@u.washington.edu.

George McWhirter is currently completing Eyes to See Otherwise: The Selected Poems of Homero Aridjis for Carcanet, Manchester; he is the principal translator and co-editor with Betty Ferber. A book of his own poetry, The Book of Contradictions, will be published by Oolichan Press next year.

David Zeiroth’s fifth book of poetry, How I Joined Humanity at Last, Harbour 1998, won the Dorothy Livesay Prize at the BC Book Prizes. His Crows do not have Retirement is forthcoming next year.