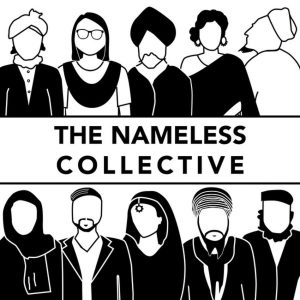 Season one of the Nameless Collective, which is produced by Manjot Bains of JugniStyle and hosted by intrepid researchers, historians and archival explorers Naveen Girn, Milan Singh and Paneet Singh, evokes past South Asian Canadian history with the care and attention it deserves. This history, as they so rightly suggest, is “untold,” and they have researched, recorded, shared and beautifully curated it as a podcast and then further as an online exhibit https://jugnistyle.com/thenameless/.

Meticulously and painstakingly researched, analyzed, and speculated about (since the archive is filled with gaps and holes), the podcast takes the listener on an intriguing journey that entertains, informs, and fascinates.  Obvious in the work of the threesome is the excitement of archival discovery, surprises of nuggets they find and happily share, the exploration of times and circumstances in past historical records, and thoughtful speculations of what might have been and what might have transpired. All this provided in an easily accessible and wonderfully enlightening hook to the listener as the podcast brings forward and looks backward at the poignant and often untold history of South Asian Canadian migration to Canada in the early 1900’s. The time was rich and replete with legal intrigue, personally challenging transnational travels, gendered experiences, political strife and much discrimination against newly arriving South Asian immigrants in a newly colonized nation. The podcasts seek to uncover and unravel those histories that Stanley (2006) in Whose Public? Whose Memory? Racisms, Grand Narratives and Canadian History suggests are shaped by systemic practices of exclusion and taken-for-granted systems of representation.

In season one, the podcast aims to name as much as possible the nameless people, the nameless stories, the nameless street addresses and the nameless events that unfolded at the turn of the last century. In that naming, the Nameless Collective challenges the scattered and disjoined South Asian Canadian record and reaffirms Somani’s (2018) point that although “fragments might appear to be insignificant when read in isolation from one another, collectively they can be understood as a sign that the once obscured stories of South Asian Canadians and their exclusions are increasingly emerging in the public sphere and national consciousness” (p.291).

This podcast and archival exhibit in the public sphere is presented with eager joy and much bantering between the researchers, making the online experience enjoyable, memorable, and easily accessible. The exuberant and joyfully responsible narration of the history unfolds as one chain link to the past, allowing the listener to stay engaged and make connections with the history as it unfolded at the time.  The richness of the exploration by the three researchers is a much-needed thirst-quencher for South Asian Canadians who have long sought an accurate and well-detailed account of Canadian history that is inclusive of all its people.

By highlighting the lived experiences of those South Asian men and women who have remained nameless in the Canadian record, the podcast will significantly impact future work on such inclusive histories. The Nameless Collective’s work has fueled the curiosity of those who seek to pass history down to future generations in a way that humanizes the lived experiences of early settlers who fought against much adversity to make Canada their home, too. The engagement of young scholars in this work is both heartening and encouraging, as history comes alive in their voices and their excitement at unearthing a record or finally linking a story to one that happened in the past episode. The series of episodes are historically linked and take the listener on a journey that they might have only heard about in hushed tones at home, but never in the public sphere. This is the beauty of the Nameless Collective podcast and archive.