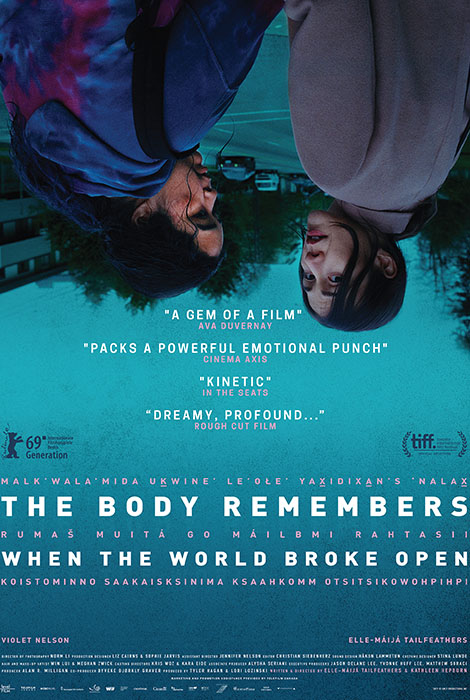 The Body Remembers When the World Broke Open

Though many will recognize Elle-Máijá Tailfeathers for her remarkable body of short and documentary films (Bloodland [2011], A Red Girl’s Reasoning [2012], Bihttoš [2014], cəsnaʔəm, the city before the city [2017]), The Body Remembers When the World Broke Open (2019) is distinguished by being her first feature-length film, co-directed and co-written by Kathleen Hepburn (writer/director of 2018’s Never Steady, Never Still), and by its meteoric success: it has won multiple festival awards, received theatrical release, and has been picked up by Ava Duvernay’s distribution company, Array, for release on Netflix in December 2019 (US, UK, AUS & NZ; streaming in Canada will be available in January 2020 via CBC Gem).

The Body Remembers begins at the intersection of two Indigenous women’s lives in the Hastings-Sunrise area of Vancouver: Áila, a light skinned Sami and Blackfoot woman returning from receiving birth control at a clinic; and Rosie, a pregnant Kwakwaka’wakw woman standing with her head lowered, bruised and barefoot in the rain, while her abusive boyfriend shouts at her from down the street. Áila, quickly grasping the situation, steps in and leads a hesitant Rosie to her own apartment to find her help and shelter.

It would be simplistic, though, to describe the moment when Áila and Rosie meet as a “chance encounter.” There’s nothing random about the lives of two Indigenous women intersecting here, in the traditional territories of the Musqueam, Squamish, and Tsleil-Waututh nations, and the site of a low-income neighborhood home to a large Indigenous population, which has been undergoing intense gentrification as Vancouver continues its march eastward accompanied by young professionals seeking more affordable housing options. This place is shaped by colonization, class, and race, dynamics informing the lives of these women who, while both Indigenous, live different realities shaped by skin privilege, urban and rural upbringings, and educational and economic opportunity. As other reviewers have noted, this is one of the first times we have seen class difference between Indigenous people on-screen, but through Tailfeathers and Hepburn’s clear lens, we also understand that class is just one node in the broader social (and colonial) matrix in which Indigenous women’s lives are constrained, the complexity of which is revealed by Áila and Rosie’s individual motivations, as well as in their nuanced interactions with one another. See, for instance, Áila’s unbearable mix of vulnerability and composure as she relates her medical history to her doctor, including an abortion and issues with anxiety and depression, and how it inflects her drive to use her resources to help a young and pregnant Rosie. Look also at how Rosie responds to Áila’s rescue efforts, withdrawn and muted while also carefully assessing Áila’s apartment for money and anything else she can put in her meticulously guarded backpack to provide for herself and her baby.

Yes, this is stereotype-busting: Áila, driven by her self-awareness and a sense of responsibility, actually needs Rosie as much as Rosie needs her; Rosie is equipped to deal with crisis and danger in adaptive and canny ways outside of Áila’s experience. Instructors, researchers, and students will find The Body Remembers to be a text rich in potential for decolonial and intersectional analysis. The film, however, is not an intellectual exercise. The Body Remembers is based on a real encounter Tailfeathers experienced, bringing it out of the realm of the purely fictional and closer to home. Filmed in real time and almost entirely in one long take, Tailfeathers and Hepburn draw the audience into intimate proximity with Rosie and Áila’s spoken and unspoken exchanges to insist that we recognize their complexity and humanity in all their discomforts. Frequent close-ups of their faces capture thoughts and emotions too nuanced to see from afar, encouraging empathy for women who are often unseen, and who also shield themselves and their scars from the world – though for a brief time, not from one another.