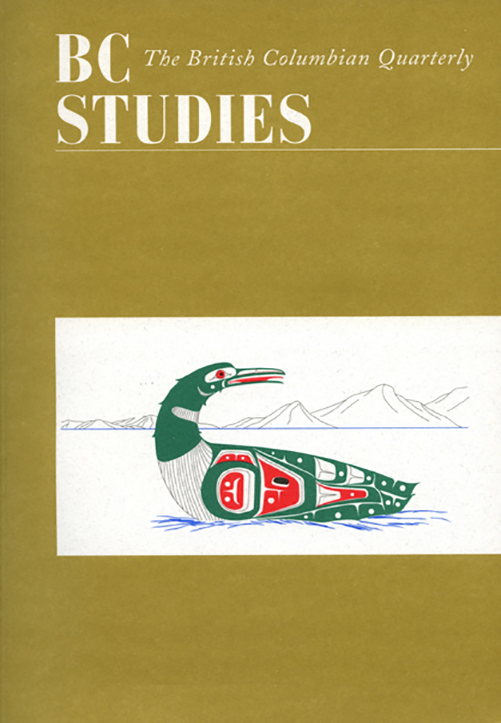 Coming off the Mountain: Forging on Outward-Looking New Left at Simon Fraser University

Home or Global Treasure? Understanding Relationships between the Heiltsuk Nation and Environmentalists

The Museum of Anthropology at the University of British Columbia

On 23 January 2010 the Museum of Anthropology (MOA) at the University of British Columbia celebrated completion of its ambitious $55.5 million “Partnership of Peoples” renewal project. The expansion included the MOA Centre for Cultural Research,...

This generously illustrated exhibition catalogue introduces the work of forty contemporary First Nations artists, ranging from emerging practitioners such as Shawn Hunt and Alano Edzerza to internationally renowned individuals such as Robert Davidson and Susan...

Imagining British Columbia: Land, Memory and Place, edited by Daniel Francis, is a collection of twenty creative non-fiction essays contributed by members of the Federation of British Columbia Writers. The federation invited writers to submit...

After the Second World War, most of the Japanese relocated in camps in the interior were sent to Ontario or to Japan, while many of those who remained in British Columbia, largely the elderly or...

The diversity that characterizes historical and modern art practices in British Columbia belies the simple dualities within which they are often framed. Common among these dualities is the division between Aboriginal and non-Aboriginal art, which...

The Power of Promises: Rethinking Indian Treaties in the Pacific Northwest

This multidisciplinary, transnational volume is a welcome addition to treaty literature in Canada and the United States. Situating treaty-making in the Pacific Northwest within a broader global context of imperialism and colonial indigenous-settler relations, the...

The cityscapes of British Columbia have changed dramatically over the last two or three decades. Alongside the high-rise towers and sports stadiums have risen new religious buildings. Very few of these are churches. The new...

The Maquinna Line: A Family Saga

What do Casper the Friendly Ghost , the co-founder of Vancouver’s Totem Theatre, Jeopardy’s Shakespeare lady, the former editor of Vancouver ’s Georgia Straight newspaper, and the nasty Nellie Oleson of television’s Little House on...

The Business of Women: Marriage, Family, and Entrepreneurship in British Columbia, 1901-1951

Despite the rich historiography of women and work in Canada, we know very little about the history of female self-employment in this country. Historians have tended to focus on women who worked for wages,...

In Vancouver Special Charles Demers presents a unique portrait of his hometown of Vancouver, where he continues to live and work as a writer and a comedian. In a series of essays that explore the...

Women on Ice: The Early Years of Women’s Hockey in Western Canada

In January 1997 the Gateway, the University of Alberta’s student newspaper, reported on the first game played by the Pandas, the women’s hockey team: “it was fascinating to watch these women playing their hearts out,...

Speaking for a Long Time: Public Space and Social Memory in Vancouver

Mike Davis claims that ours is a time when the lived geographies of privilege and marginality intersect with an ever-diminishing regularity [1]. If he is right, then critical urban research that attempts to understand how new...

BC Studies no. 171 Autumn 2011 | Bibliography of British Columbia

Lynne Davis is Associate Professor in the Department of Indigenous Studies, Trent University. Her current research is in the area of alliance-building between Indigenous peoples and social and environmental justice groups, and she recently published the edited volume Alliances: Re/Envisioning Indigenous – non-Indigenous Relationships (University of Toronto Press, 2010).

Edward Dutton is Docent (Adjunct Professor) of the Anthropology of Religion and Finnish Culture at Oulu University in Finland. He has a degree in Theology from Durham University and a PhD in Religious Studies from Aberdeen University. Dr Dutton’s book Culture Shock and Multiculturalism is in press with Cambridge Scholars Publishing. His other books are The Finnuit (Akademiai Kiado, 2009) and Meeting Jesus at University (Ashgate, 2008). He has also written for various newspapers and magazines including The Telegraph, the Times Educational Supplement and the Contemporary Review. In his spare time, he enjoys Indian cooking and genealogy.

Jack Little is a member of Simon Fraser University’s History Department. He has written a number of articles on Canadian landscape and tourism, and currently has a forthcoming biography of Sir Henri- Gustave Joly de Lotbinière.

Ian Milligan is completing his dissertation, “Rebel Youth: Young Workers, New Leftists, and Labour in English Canada, 1964-1973,” with York University’s Department of History. He has previously published articles in Labour/Le Travail, Urban History Review/Revue d’histoire urbaine, and Ontario History. Milligan is a founding co-editor of the website ActiveHistory.ca and has begun work on his next project: a digital history of postwar English-Canadian youth cultures.

Ken Scott has a BA in Political Science and a MA in History from the University of Victoria. He is originally from Victoria, and has lived across Canada working in various capacities in the health care sector.