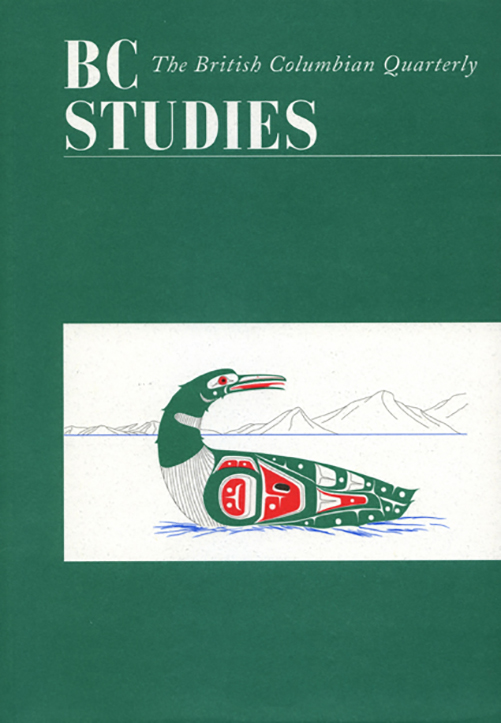 Reflections on Being, and Becoming, Metis in British Columbia

The Rise and Fall of a Model Forest

The Reluctant Land: Society, Space, and Environment in Canada before Confederation

This ambitious book takes up the daunting challenge of surveying Canada’s evolution from the 1500s to the 1870s. Cole Harris’ long and distinguished career as a historical geographer with exceptionally wide-ranging interests provide him with...

One Step Over the Line: Toward a History of Women in the North American Wests

One Step Over the Line is the second published collection of papers drawn from a conference held at the University of Calgary in 2002 (the first, Unsettled Pasts: Reconceiving the West through Women’s History, was...

I am not as confident as is Dominique Clément that “the vast majority of Canadians instinctively see human rights as an inherent good” (9). It might be true that most of us value civil liberties, at...

Liz Bryan will be known to many readers of BC Studies as the founding publisher and editor (with her husband, photographer Jack Bryan) of Western Living and the author of British Columbia: This Favoured Land...

The Archive of Place: Unearthing the Pasts of the Chilcotin Plateau

William Turkel grew up in central British Columbia; studied linguistics and psychology before undertaking doctoral studies in history, anthropology, and the Science, Technology and Society Program at the Massachusetts Institute of Technology; and now teaches...

Concerned that not all Native Alaskan children had the opportunity to learn their communities’ ancient songs and dances or to participate in traditional ceremony, the fledging Native non-profit Sealaska Heritage Institute decided to hold a...

Landing Native Fisheries is an important contribution to the history of fisheries and a good companion to Harris’ Fish, Law, and Colonialism (2001). This is a serious study that demonstrates conclusively that dispossession of Aboriginal...

Rocksalt: An Anthology of Contemporary BC Poetry

There are many strong poems among the 108 contributions to Rocksalt, the first anthology of BC poetry in more than thirty years. The editors favour narrative lyric, though there is a handful of innovative texts...

The protagonist of Irene Baird’s Depression-era novel Waste Heritage is Matt Striker, a twenty-three-year-old transient from Saskatchewan. A veteran of the Regina Riot in 1935, which ended the On-to-Ottawa trek, Matt arrives in Vancouver by...

Bill Stenson’s Svoboda is a coming-of-age novel set in the West Kootenay during the 1950s. Vasili Saprikin is a Doukhobor who spends most of his earliest years with his mother (a widow) and grandfather in...

There will be few people in British Columbia who are unfamiliar with Reena Virk’s name. In Reena: A Father’s Story, Manjit Virk tries to give what, in his view, is a more accurate depiction of...

Nechako Country: In the Footsteps of Bert Irvine

This personal history is written in concise and readable prose. It is an account of the life of Bert Irvine, an oil worker, soldier, carpenter, trapper, and wilderness guide who chose to live close to nature....

John Schreiber’s book reminds us that British Columbia’s landscape is defined and haunted by stories from the colonial past. As a self-proclaimed “ragamuffin out of the bush” (12), Schreiber’s narrative takes the unconventional form of...

Site C: Considering the Prospect of Another Dam on the Peace River

BC Studies no. 161 Spring 2009 | Bibliography of British Columbia

Jean Barman has published extensively on British Columbian and Canadian history. Together with fur trade historian Bruce Watson, she is currently writing on French Canadians and Iroquois in the making of the Pacific Northwest. She is Professor Emeritus at the University of British Columbia and a Fellow of the Royal Society of Canada.
Michael Church, a Professor Emeritus of Geography, lectured at the University of British Columbia for thirty-eight years on aspects of resources and environmental management. His research interests focus on landscapes and resources of rivers – more specifically, on river form and stability. To pursue these themes he has conducted studies of the Peace River ever since the completion of the Bennett and Peace Canyon dams. This forty-year longitudinal study is unique in its recording of the effects a major dam has on a river.
Emily Jane Davis is a PhD candidate in the Department of Geography at the University of British Columbia. Her research interests centre on rural communities in times of change and challenge. She also is a research assistant for the Forest History group of the Network in Canadian History and Environment (NiCHE).
Nichole Dusyk is a PhD student at the University of British Columbia’s Institute for Resources, Environment and Sustainability. Her dissertation research focuses on local and participatory energy planning in British Columbia.
Mike Evans is an Associate Professor and Head, Community, Culture, and Global Studies – UBC Okanagan. His primary research relationships are with people in the Métis community in Northern BC, the Métis Nation of BC, the Urban Aboriginal Community of the Okanagan Valley, and the Kingdom of Tonga (in the South Pacific). Dr. Evans has been involved in several community-based research initiatives, and in particular has a long-term relationship with the Prince George Métis Elders Society. Together with Elders and community leaders in Prince George he put together a Métis Studies curriculum for UNBC and a number of publications including What It Is to Be a Métis (Evans et al., 1999) and A Brief History, of the Short Life, of the Island Cache (Evans et al., 2004).
Matthew Evenden is an Associate Professor of Geography at the University of British Columbia whose research focuses on the environmental history of rivers. He is the author of Fish versus Power, which focuses on the Fraser River, and a forthcoming environmental history of the Bow River (with Christopher Armstrong and H.V. Nelles) entitled The River Returns. He serves as the co-organizer, with Stéphane Castonguay, of the Canadian Water History Project/Projet sur l’histoire de l’eau au Canada.
Ken Forest, a retired school principal, is now a director with the Peace Valley Environment Association (PVEA). He has used his knowledge and experience as a biologist and teacher to develop a school district outdoor education site and to campaign for preserving the Peace River Valley. He currently lives with his family in a self-constructed log home overlooking the Peace River. In 1989, he was presented with a Medal of Bravery by the Governor General of Canada at Rideau Hall in Ottawa, Ontario.
Marjorie Griffin Cohen is an economist who is a Professor of Political Science and Women’s Studies at Simon Fraser University. She is a former member of the Board of Directors of BC Hydro and BC Power Exchange and writes frequently about issues related to electricity restructuring.
Sean Kheraj is a Social Sciences and Humanities Research Council of Canada Postdoctoral Research Fellowship in the Department of History at the University of British Columbia. He has previously published articles on the history of Stanley Park in BC Studies and Canadian Historical Review.
Robert A.J. McDonald teaches British Columbia history in the History Department at the University of British Columbia. A former editor of BC Studies and author of Making Vancouver: Class, Status, and Social Boundaries, 1863-1913 (1996), he is currently writing a book on “Liberalism, Modernity, and Political Culture in British Columbia, 1870s to 1970s.”
Alexander Netherton is a Professor at Vancouver Island University and a research associate with the Centre for Global Political Economy at Simon Fraser University. His recent work on hydro in Canada seeks to delineate how successive shared policy regimes change over time.
Adrienne Peacock received her PhD in Zoology from the University of British Columbia in 1981 and then served as consultant to the Peace Valley Environment Association (1981-82) during the BC Utilities Commission Site C Hearings. She was a member of the Faculty of Biology at Douglas College for over two decades and was recently appointed faculty emerita. She has also served on numerous boards, including that of the West Coast Environmental Law Association, the Georgia Strait Alliance, and the David Suzuki Foundation.