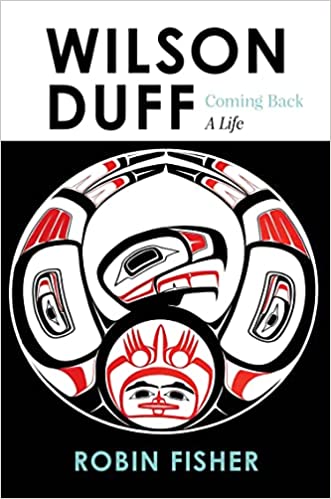 Wilson Duff: Coming Back, A Life

Wilson Duff’s life had enough pathos and controversy to inspire two fictional operas, a novel, and considerable gossip. It is about time for a factual biography. This thoroughly researched and well-written book is a must for anyone interested in Duff, and in the history of anthropology, archaeology, museums, and totem pole preservation in the Pacific Northwest. Robin Fisher interviewed no fewer than sixty people and conducted extensive documentary research, including in the considerable papers of Duff himself, to offer the most detailed portrait that we can ever expect to obtain. It is a superb contribution.

Fisher’s early chapters trace Duff’s formative years from his birth in a working-class family in Vancouver in 1925, to the end of his role as a navigator in World War II bombers. Those years are important for understanding Duff (and would be interesting to anyone interested in children and youth of that generation), but they predate Duff’s interest in Anthropology. It was in 1948, when Harry Hawthorn recruited him that Duff turned to that discipline. When he graduated from UBC in 1949, Duff already anticipated his appointment as provincial anthropologist at the British Columbia Provincial Museum. Fisher explains the personal and intellectual influences that brought him there. After completing an MA in 1950, Duff worked at the museum for fifteen years before joining the faculty at UBC in 1965. Those years are the subject of three chapters that explore and explain Duff’s most controversial legacy.

Duff contributed to ethnology and archaeology, museum practice, totem pole preservation, and education (of the public and of university students). When most British Columbians were indifferent to Indigenous art, and when some journalists disparaged totem poles as hideous monstrosities, Duff negotiated the removal and preservation of the poles with the consent (and sometimes at the request) of Indigenous communities.

Having attended some of Fisher’s talks about Duff, I doubt that this book will end all controversy. It should, however, dispel myths that remorse over his role in the removal of totem poles drove Duff to suicide in 1976. By 1976, Duff thought the time for removing totem poles had passed, but he believed that it was right to do so when and how he did (with the support of the Indigenous people who owned the poles). Fisher also cogently defends the more important argument that Duff’s respectful efforts to preserve totem poles and other artifacts were instrumental in defending Indigenous claims, ensuring that Indigenous art flourished, and bridging the gulf of understanding between Indigenous and non-Indigenous British Columbians.

There is little doubt that, although shy and nervous, Duff profoundly influenced thousands of students who crowded into his UBC courses and the many who attended the Indigenous art exhibits he helped plan and promote. Fisher also explores that legacy. He also shows that Duff was early among academics to have his students ponder the ethics of removing artifacts from Indigenous communities.

Duff had tragic flaws. Convinced that his parents had rejected him, guilt-ridden over his inadequacies as husband and father, insecure about his standing as academic and educator, Duff succumbed slowly to his “own neurotic personality” (Duff’s words) (298). Depression, anxiety, and guilt, coupled with a belief in reincarnation, eventually led him to suicide. Fisher sensitively takes the reader through Duff’s tortured later days.

Much has been said and written about Wilson Duff, and Fisher’s is unlikely to be the last word. However, Robin Fisher has put the life and work of Wilson Duff in its historical context in a way that is unlikely ever to be surpassed.