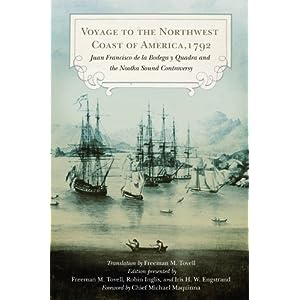 The heart of this work, and its raison d’être, is the report of Juan Francisco de la Bodega y Quadra, dated 2 February 1793 at San Blas, Mexico. This document is not a diary or journal; it was concluded six months after the proceedings recounted and described. The report was intended for the Viceroy of New Spain and for the King of Spain, and it is a useful summary from the position of the Spanish Commandant’s meeting with Captain George Vancouver at Nootka in late August the previous year. Bodega y Quadra and Vancouver were respectively Spanish and British commissioners sent to implement the particulars of the Nootka Sound Convention. It is no surprise that agreement could not be met, for Bodega y Quadra’s vaunted demands were unacceptable and Vancouver held tenaciously to his own authorized position. It is thus rather fascinating to read Bodega y Quadra’s narrative alongside that of Vancouver’s, the latter printed in W. Kaye Lamb’s Voyage of George Vancouver, published in definitive edition by the Hakluyt Society.

From our own distant viewpoint, the social gathering of mariners from rival empires meeting at what must have seemed like the ends of the earth, on the margin of a great continent of as yet unknown value and one still shrouded in geographical mystery, seems but an enchantment in our time and space. Maquinna and the First Nations, observers and participants in the larger drama, and hosts to the visitors in Maquinna’s Big House for hereditary dances, speeches of honour, and a sumptuous feast of the finest foods of ancestral lands and seas, could hardly have known that, over the dinner parties aboard ship in which the Spanish supplied the “eatables” and the British the “drinkables,” the destiny of Vancouver Island was being worked out. The outcome depended on a successful exchange of letters that might reach an agreed conclusion. That proved to be mission impossible.

Bodega y Quadra’s charm exudes from this work, and in his opening sentence he pats himself on the back by saying that the King of Spain “thought fit to support this part of America with appropriate honor,” and after consulting the ranking authority, named Bodega y Quadra commandant at Spain’s Pacific base at San Blas in 1789. When he reached Vera Cruz news had arrived that Martínez had seized British-owned ships and property at Nootka. Bodega y Quadra hastened to San Blas, readied its warships, examined Russian establishments in the far north, and sent means of strengthening Spanish interests at Nootka and in the Strait of Juan de Fuca. It is clear that the Spanish had been caught flat-footed, for having feared the Russians in the north they now found the British and the Americans trading on the Northwest Coast from the Columbia River north to the Gulf of Alaska. Overcome by events, the Spanish court sent instructions to Bodega y Quadra to proceed to Mexico City for consultations and orders. He was told to embark on a frigate for Nootka to meet the British there. Not thinking a frigate enough, Bodega y Quadra added another frigate, a schooner and two goletas, or small schooners. Bodega y Quadra wanted a show of strength and he arranged it to his satisfaction. In the afternoon of 29 April 1792 he anchored in Nootka. The report recounts the arrival and departure of vessels, most importantly H.M. storeship Daedalus, with supplies for Captain Vancouver’s ships then making their survey of the Strait of Juan de Fuca and Georgia Strait and waters north. There are few revelations here. But the arrivals and departures assure us of how busy Nootka was in those days, for it was the centre of North Pacific shipping, with tentacles to Alaska, the Hawaiian Islands, China and Mexico, to say nothing of European and American ports. The report notes the arrival of Vancouver’s ships, also that of the goletas of Alcalá Galiano and Valdés and their early departure south.

Evocative and carefully chosen illustrations accompany this work, principally View of the Bay of Friendly Cove from the Spanish Establishment, courtesy of Archivo y Biblioteca, Ministerio de Asuntos Exteriores y de Cooperación. It shows six sailing vessels anchored, with room for more, and a few days later ten vessels were there, the greatest number ever collected together in this sound. Artist of the cover illustration on the book is strangely not signified in this work. Good maps and a serviceable index aid the working scholar and serious student of history.

The introduction for this work forms the first part of the book and dwarfs the report itself. Instead of briefly introducing the main characters of this dramatic story, with all its dramatic sequence, and then dealing with the essential differences of the positions of Bodega y Quadra and Vancouver, we are treated with a reiterative narrative. That subject was examined elsewhere to great satisfaction by Warren Cook in Flood Tide of Empire and in Freeman Tovell’s At the Far Reaches of Empire, his biography of Bodega y Quadra. A critical edition of a document necessarily should provide footnotes to take up and discuss the issues brought forth in the document at that point where the writer of that document deals with such issues.

This handsome book takes its rightful place as a classic in Northwest Coast history. It is a great credit to a devout team of translators, editors, and advisors who have made it into a first class book. As Chief Michael Maquinna of Mowachaht First Nation, Tsaxana, British Columbia, rightly says in the Foreword, this work helps to rekindle interest in this period of history. “This publication of the journal of Bodega y Quadra, an honored guest of my ancestor in 1792, adds significantly to our shared heritage.”